Venom’s Place In The MCU Depends On J. Jonah Jameson 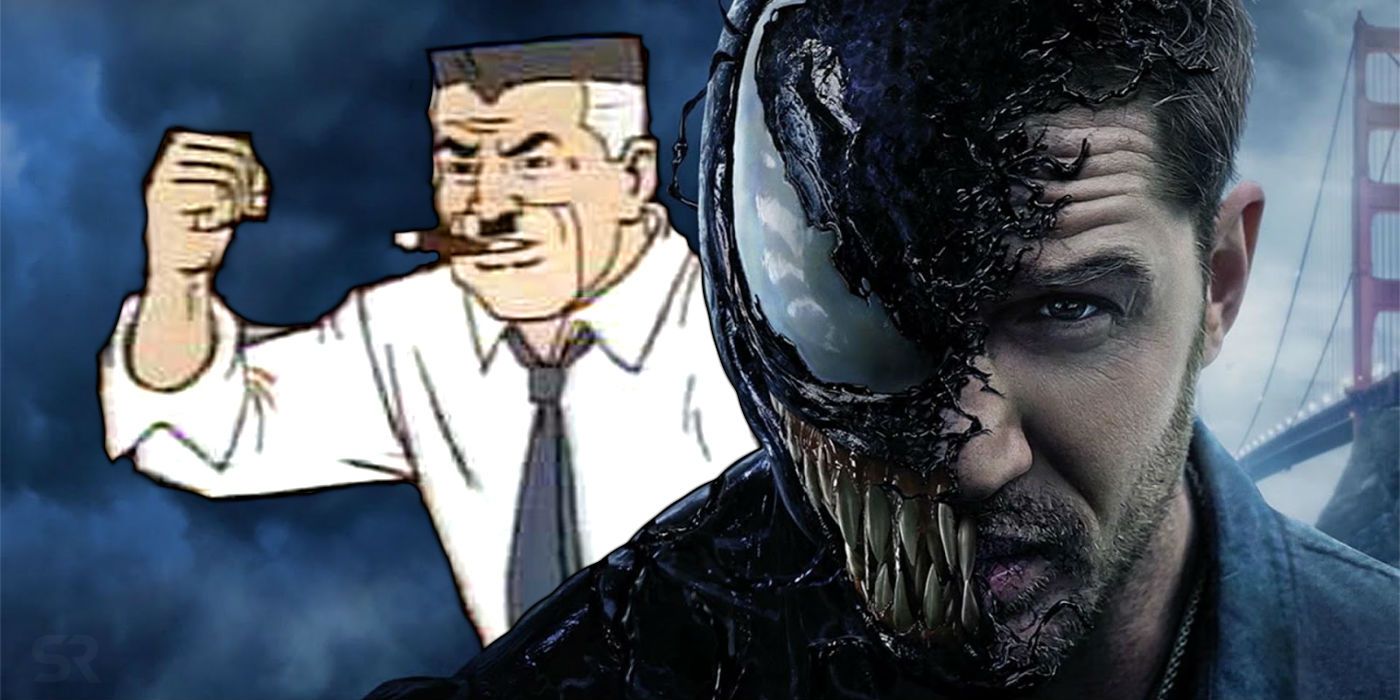 If Venom is retconned to join the Marvel Cinematic Universe, the key to that happening could be J. Jonah Jameson. The infamously abrasive publisher of the Daily Bugle - Marvel's most celebrated newspaper - doesn't appear in Venom, but he is the most notable member of Spider-Man's immediate circle referenced. Although Jonah is not technically in the MCU either, the cigar-chomping newsman remains the strongest tether Venom currently has to possibly be folded into the MCU in the future.

Set in San Francisco rather than Spider-Man (and Venom's) traditional home of New York City, director Ruben Fleischer's film establishes a Spidey-free universe where reporter Eddie Brock (Tom Hardy) bonds with the sinister alien symbiote calling himself Venom. Together, they prevent the evil duo of billionaire Carlton Drake (Riz Ahmed) and the symbiote known as Riot from using the spaceship owned by Drake's Life Foundation to bring more symbiotes to conquer Earth. Venom sets up Eddie/Venom as the 'lethal protector' of the city; they're now an antihero who will bring down (and possibly eat) bad guys who threaten the good people of San Francisco.

Related: Is Venom In The MCU: Sony/Marvel Movie Rights Explained

Venom is said to be an 'MCU-adjacent' film, according to its filmmakers. It exists in its own movie universe (for now) separate from the MCU and also not directly related to the previous Spider-Man films. However, despite brutal reviews from critics, Venom was a hit at the box office and won over a lot of fans. Those same fans wonder what the future holds for the symbiote and wonder whether the possibility exists that Venom can one day face Tom Holland's Spider-Man in the MCU (something Holland himself would love to see).

Complicating matters a bit is the clip from the animated Spider-Man: Into The Spider-Verse film shown in Venom's post-credits scene. By opening the clip with "Meanwhile, in another universe..." Sony is now actively teasing a Spider-Man multiverse, not unlike DC's Multiverse. Since the studio acknowledges other universes exist, and Sony has a working relationship with Marvel Studios, it's not a hard leap to make that Venom could one day jump to the MCU, thanks to Spider-Man's status as an Avenger. Here's how J. Jonah Jameson could ultimately serve as the bridge to make this happen. 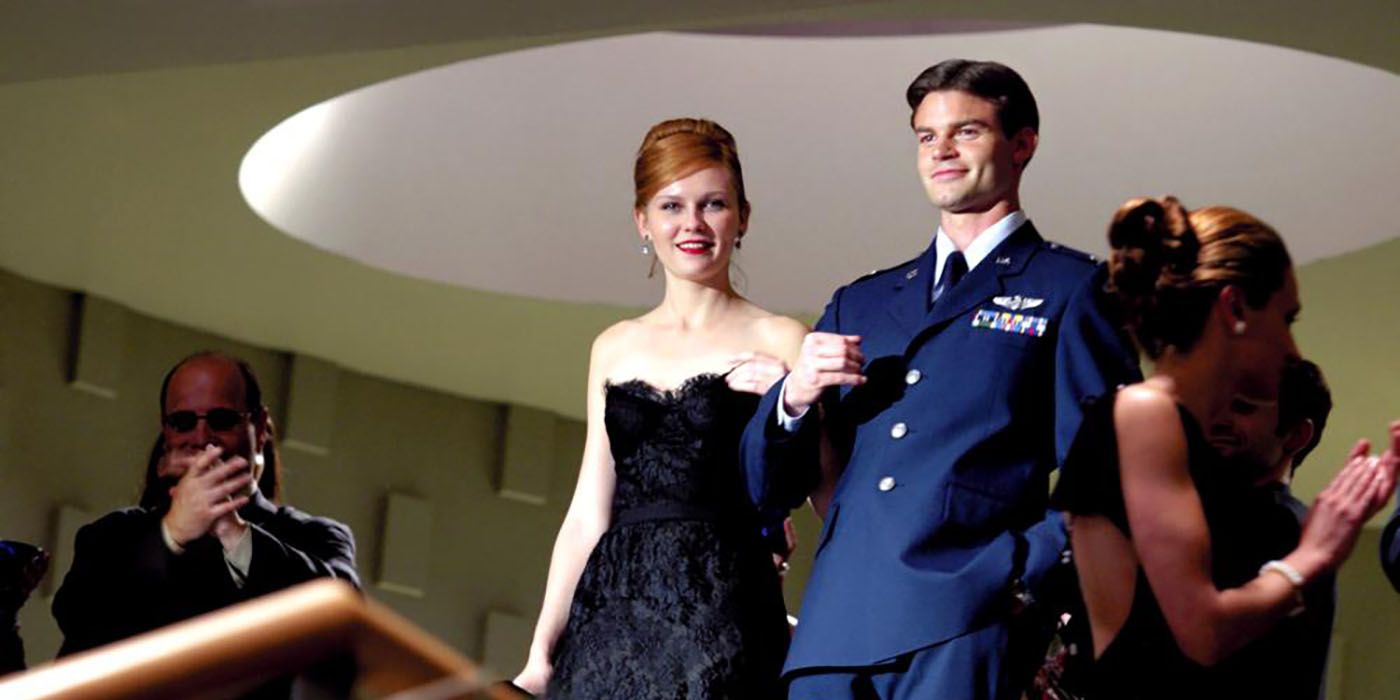 While J. Jonah Jameson doesn't appear in Venom, he does seem to exist in that universe. The strongest proof of this is the appearance of John Jameson (Chris O'Hara), the astronaut who piloted the Life Foundation spacecraft that brought the symbiotes to Earth. In the comics and in Sam Raimi's Spider-Man 2, John Jameson (Daniel Gilles) is the son of J. Jonah Jameson (J.K. Simmons) - and Jonah is so proud of his astronaut offspring, he points to John as an example of "a real hero",  unlike the masked vigilante Spider-Man. John was also Mary Jane Watson's (Kirsten Dunst) boyfriend in Spider-Man 2 until she left him to resume her romance with Peter Parker (Tobey Maguire). So it stands to reason, if John Jameson exists in Venom than so does his infamous father and this was the greater point of including John.

The other big easter egg reference to Spider-Man in Venom is Eddie Brock's previous career working for the Daily Globe. In the comics, the Globe is the Daily Bugle's biggest rival. Its publisher, Barney Buskin, is also referenced in Venom when Eddie is looking for work after he's fired from his job as a TV news personality, and reaches out to his former employer. These callbacks point to a greater Marvel universe that Venom is part of and none of it contradicts anything established in the MCU.

Jameson (And The Daily Bugle) Have Been Avoided In The MCU 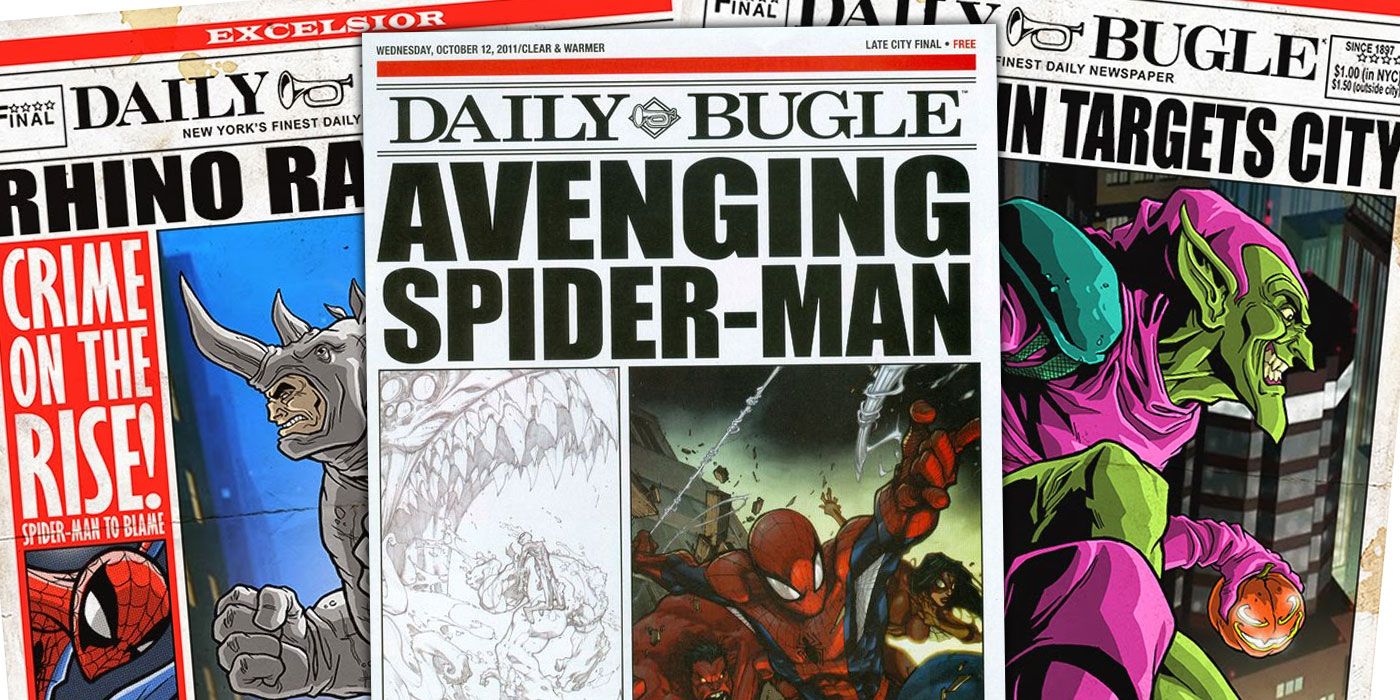 The MCU hasn't shown that the Daily Bugle or J. Jonah Jameson exist yet in any of its movies or TV shows, but that doesn't necessarily mean they don't. However, it doesn't help Mr. Jameson's MCU prospects that his most famous employee, Peter Parker (Tom Holland), doesn't work for him at all in the MCU - and it's possible Peter won't ever become a freelance photographer for the Daily Bugle who somehow always gets exclusive photos of Spider-Man.

Part of Marvel Studios' modus operandi when it comes to Spidey is to avoid all of the tropes fans have already seen in Sam Raimi and Mark Webb's five prior Spider-Man films. Spider-Man: Homecoming purposely kept the web-slinger from swinging across Manhattan's skyscrapers, for example, and since Tony Stark (Robert Downey, Jr.) is his patron, Peter doesn't seem to need a part-time job at the Daily Bugle. What's more, Peter is a Millennial who doesn't read newspapers, so why would he want to work for one? And it's not like Peter has time for a part-time job anyway with all of the travel he does as Spider-Man - whether its trips to Berlin in Captain America: Civil War, Washington, D.C. in Homecoming, outer space in Avengers: Infinity War, or a European vacation in next year's Spider-Man: Far From Home, the MCU's Spidey is a world-traveling superhero.

Since, Spider-Man and the Avengers don't spend much time in NYC anyway, the MCU doesn't really need to introduce the Daily Bugle or J. Jonah Jameson. But that still doesn't mean they don't exist in the MCU - just that the opportunity to properly introduce them hasn't yet arisen.

Page 2: J. Jonah Jameson Can Make Or Break Venom In The MCU 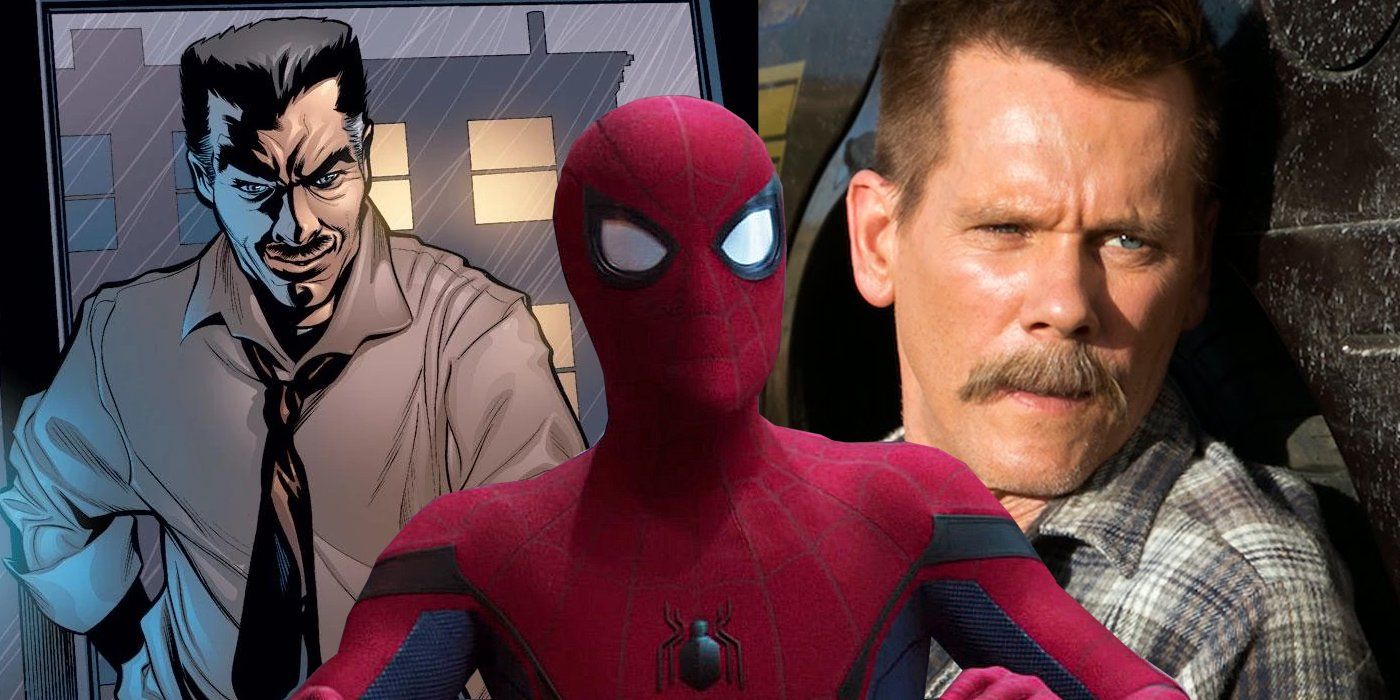 Marvel/Sony Haven't Figured Out How to Do J. Jonah Jameson

J. Jonah Jameson hasn't appeared in a movie since Spider-Man 3 over a decade ago. Since 2002, three actors have played Peter Parker/Spider-Man, two actresses have played Gwen Stacy, there have been two Harry Osborns, two Norman Osborns, three Aunt Mays, two Uncle Bens, three Flash Thompsons, two Eddie Brock/Venoms, two Dr. Curt Conners, and Mary Jane Watson was supposed to be played by Shailene Woodley in The Amazing Spider-Man 2 until her scene was cut. And yet, J.K. Simmons' iconic portrayal of J. Jonah Jameson prevails as the only live-action version fans have seen.

Mr. Jameson didn't appear in either of the Amazing Spider-Man films starring Andrew Garfield, although he was referenced in an email. Garfield's Peter not working for the Daily Bugle was one of the few things Marc Webb didn't retread from Sam Raimi's trilogy. But besides how the character was possibly being saved for Sony's scrapped The Amazing Spider-Man 3 or Sinister Six, was no J. Jonah Jameson in those films also because Sony didn't quite know how to follow up J.K. Simmons' incredibly popular version?

Related: All The Spider-Villain Movies Coming After Venom

Meanwhile, though fans have been casting everyone from Kevin Bacon to Gary Oldman to even J.B. Smoove as the Daily Bugle's mustachioed top banana, the MCU doesn't seem to be in any rush to fill the role either. This is, again, simply because Jonah and the Bugle simply aren't necessary (yet) in the MCU's Spider-Man films, but the longer this continues, it only further cements J.K. Simmons' JJJ as the definitive live-action version. Even though Simmons himself has moved on to play Commissioner Gordon in the DCEU, fans still know the Oscar-winning actor best as J. Jonah Jameson.

JJJ Will Make Or Break Venom In The MCU 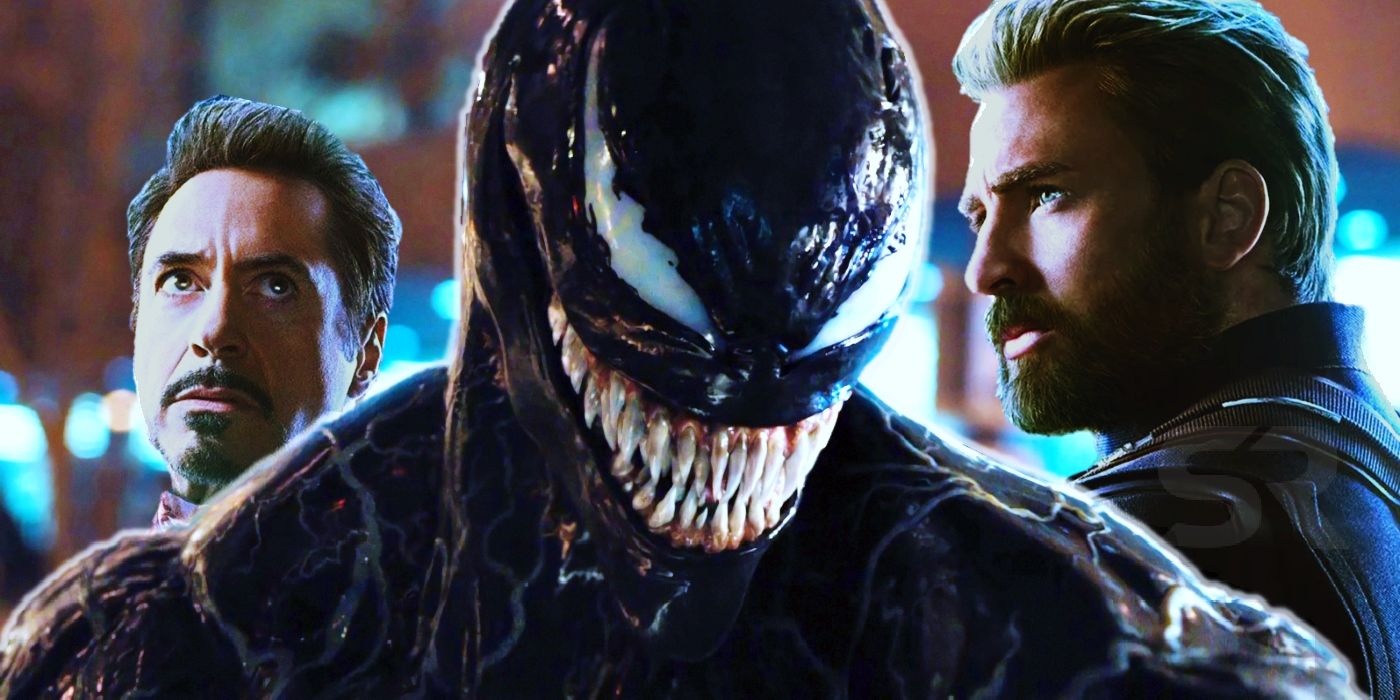 Unless he appears or is referenced in Spider-Man: Far From Home and therefore is finally established in the MCU, J. Jonah Jameson's movie future could depend on what Sony chooses to do with the character. Since he's so closely linked to Spider-Man, Jameson probably won't reappear in a movie unless he get to torment Peter Parker and his wall-crawling alter ego. However, Sony had plans for Jonah to crossover into its other spinoffs. Along with Harry Osborn, there were rumors that Jameson factors in Silver & Black due to his comic book ties to the Scorpion, one of that film's possible villains. Silver & Black has since been split into two movies - one about Silver Sable and one about Black Cat - so either could introduce Jameson. The rumored Kraven the Hunter film could also pull the trigger on JJJ, especially if Spider-Man is Kraven's target. Overall, both Sony and Marvel Studios are spinning their wheels on Jameson and the Bugle until the right opportunity comes along to finally re-introduce both.

So where does all of this leave Venom and his chances of joining the MCU? It all potentially depends on how many dominoes fall into place for J. Jonah Jameson appearing in the MCU, because if he does, then he'll likely be the only one, just as Tom Holland's Spidey is the only live-action one currently active. This then bodes well for Venom in the MCU, since Jameson is Eddie Brock's strongest tie to his unseen past life and career in NYC and there probably won't be another JJJ cast in Sony's universe, to avoid fan confusion. It's also certainly helpful that Venom is a record-breaking hit and that Venom 2 is a certainty - the potential for Venom one day meeting Tom Holland's Spider-Man only gets stronger with the symbiote becoming a huge movie star in his own right.

The most important thing for fans is that the door is being kept open for every possibility by both Marvel and Sony. While Venom will continue wreaking havoc in San Francisco, Venom wisely planted the seed through John and J. Jonah Jameson that Eddie Brock and his best symbiote pal might have still have a future in the MCU.

Yesterday, we showed you what the PlayStation 5 looks like in the wild. But that’s not the only next-gen console comi...
Read More

Save up to 25% on Sabrent SSDs | Amazon Gold BoxRead more...
Read More
Back to News