Venom 2 Can Add His Logo WITHOUT Spider-Man 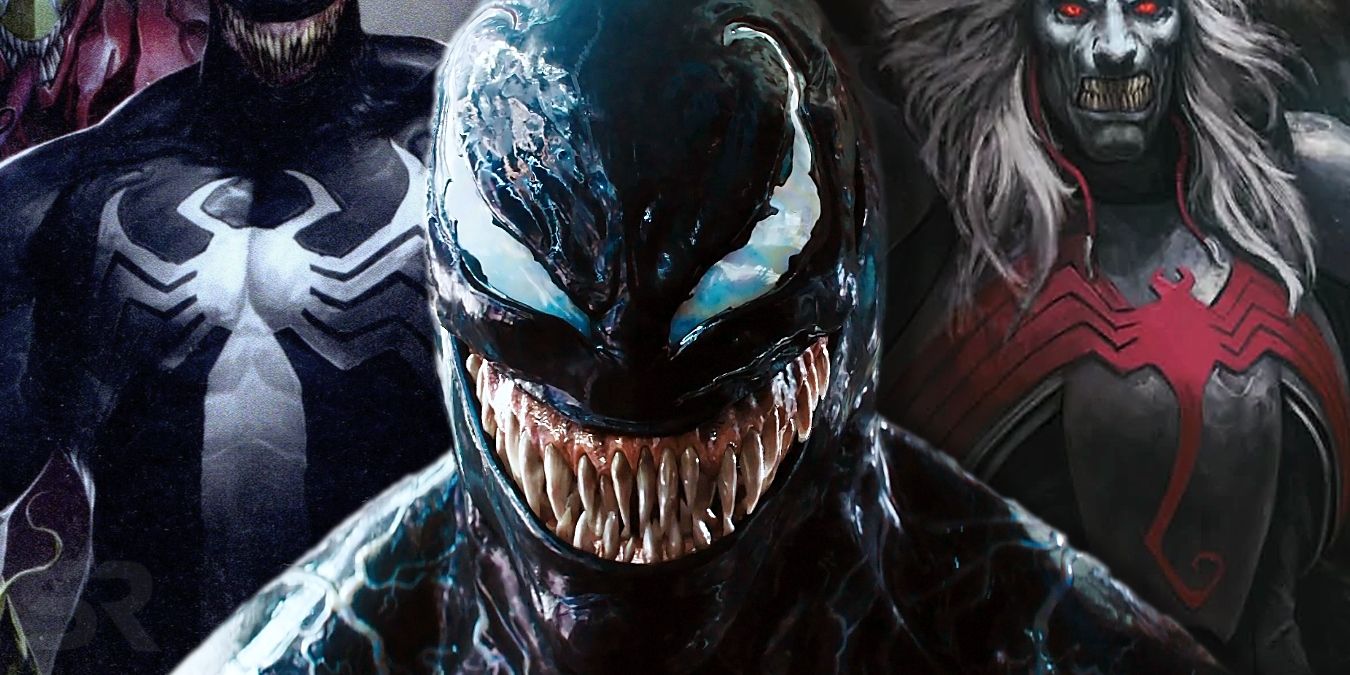 Sony's Venom movie brought the symbiote superhero to life, but without his iconic chest logo. The filmmakers had a good reason for leaving Venom's white spider insignia out, but in Venom 2, the door is finally open to create the exact Venom seen in Marvel Comics - and do it without Spider-Man.

For some fans who know the original origin of the symbiote and Eddie Brock, that might seem downright impossible without completely rewriting the comic source material. We would argue that's not necessarily a reason NOT to change comic history, since Venom ignoring Spider-Man in the movie actually gave fans a better adaptation of who Venom is today. Could the same hold true here? We won't know until Venom 2. But there's one thing we do know:

Venom did NOT get his logo from Spider-Man. And trust us, the true origin of the Venom logo isn't just better... it has all the makings of a Venom movie trilogy like no other. 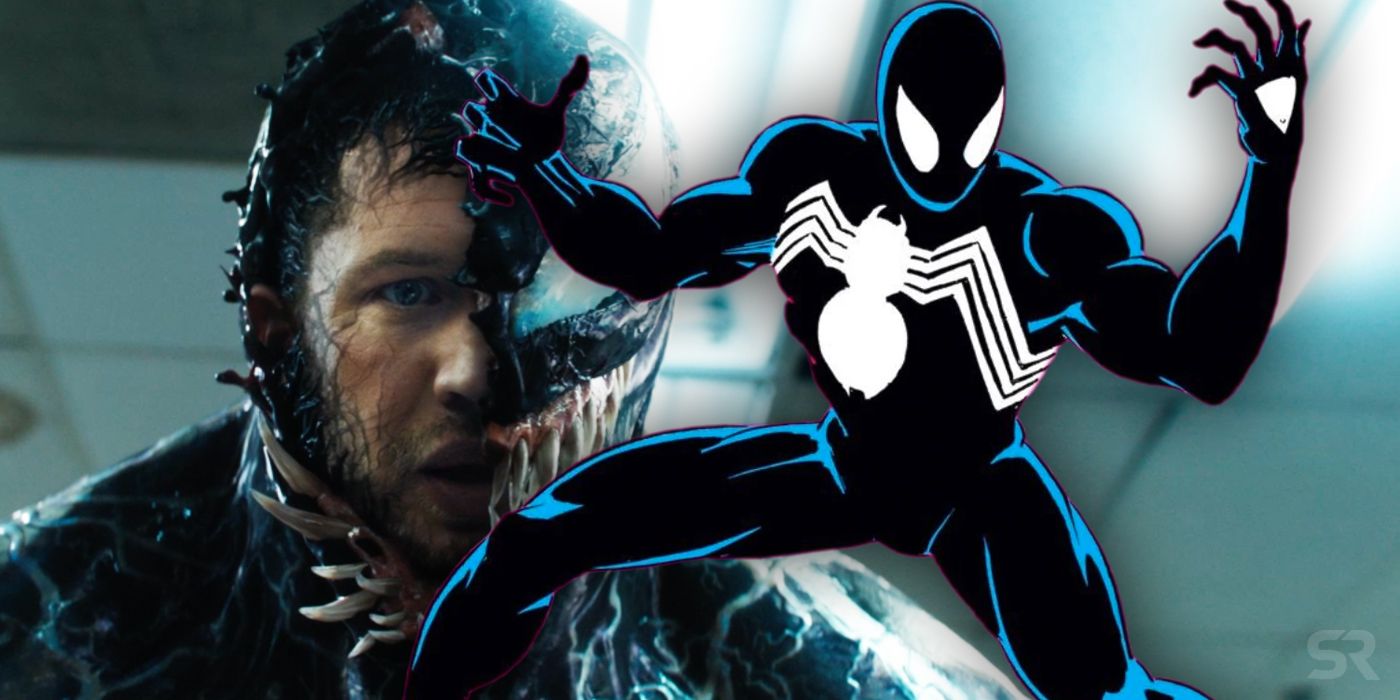 For most casual (or simply not current) comic book fans, the origin of the symbiote's insignia comes from Spider-Man along with the suit itself. Spider-Man found the black ooze-suit during the Secret Wars event, it covered him and synced with his mind to create his new Spider-Man comic uniform, until he learned it was a living "parasite" trying to permanently bond with him. Marvel would eventually clarify this story to confirm that Spider-Man was wrong, not the symbiote, meaning Eddie Brock was a better fit for "Venom" all around.

In that first version of the story, Eddie simply wore the same suit worn by Peter Parker, just with more muscles and a monstrous mouth. Fans knew long before the Venom movie was released that Spider-Man wouldn't be included, simply having Eddie find the alien symbiote and cut out the friendly neighborhood middle man. As a result, logic dictated, Venom couldn't have that classic spider logo.

But that's only been true in the first version of Venom's origin. In recent years the symbiotes have had their history rewritten as part of a much larger, much more fantastic godly epic. Besides changing the origin of the symbiotes as a whole, it also made the Venom insignia something far more meaningful.

The Truth: Venom's Logo is an Ancient Symbol 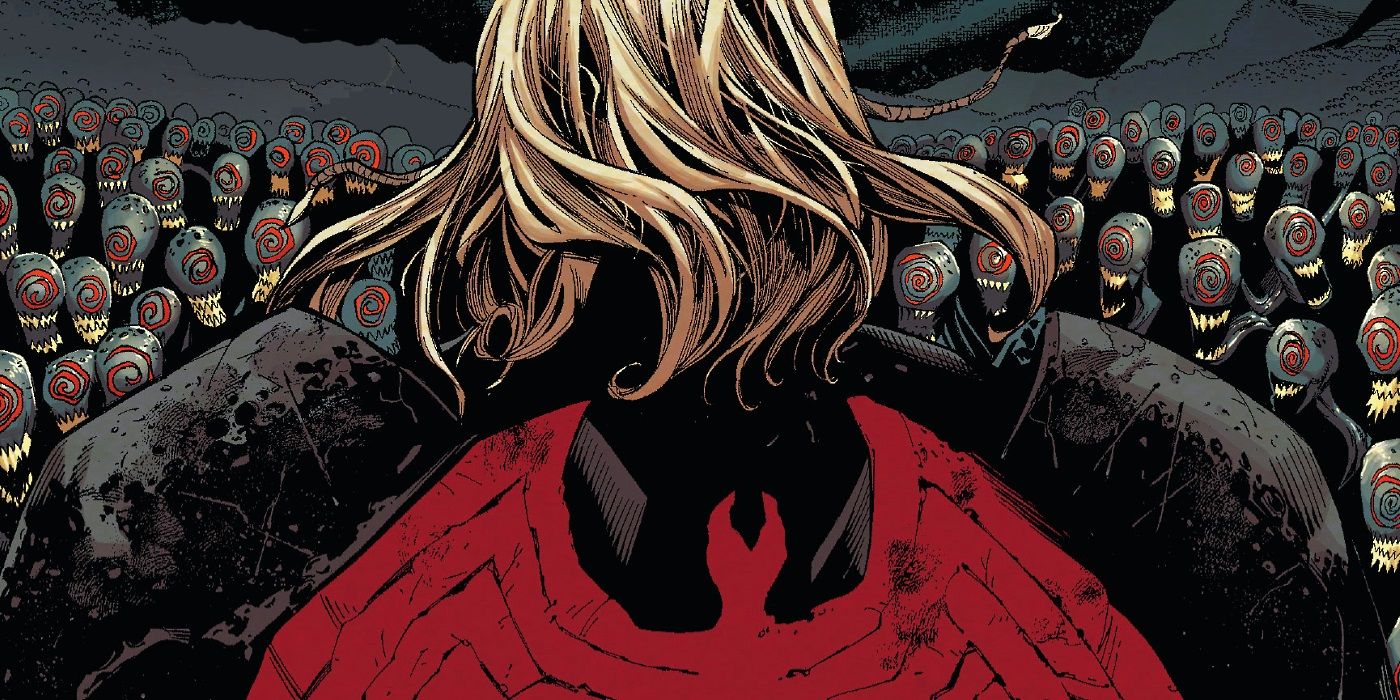 It's understandable for fans of Spider-Man to bristle at the modern rewriting of symbiote history, since - like most retcons making Venom his own character - it paints Peter Parker as something of a galactic dunce. Where he was once the creator of his own great villain, the symbiote lore has turned his part in Venom's creation into a coincidence - a brief role akin to a small child finding the Holy Grail, drinking from it, then tossing it aside for a new champion to begin a great quest worthy of such a relic.

So yes, the filmmakers and fans are right to say that Venom's logo WAS similar to Spider-Man's. But the Venom comics have made that factually incorrect in recent years. Well, in recent year, to be exact. Because the latest Venom reboot finally unlocked the true origins of the symbiotes, as the creation of an Elder God billions of years in the past. An Elder God named Knull who created the symbiotes as a weapon. And an Elder God whose symbol is still pressed on Venom's chest.

So removing Spider-Man from Venom's movie origin doesn't have the slightest impact on his famous logo. But embracing the TRUE origin of the symbol Venom wears on his chest means a Venom movie villain that would blow Thanos out of the water - and make Carnage nothing but an appetizer...

Page 2 of 2: Venom's Logo Belongs To The Symbiote GOD 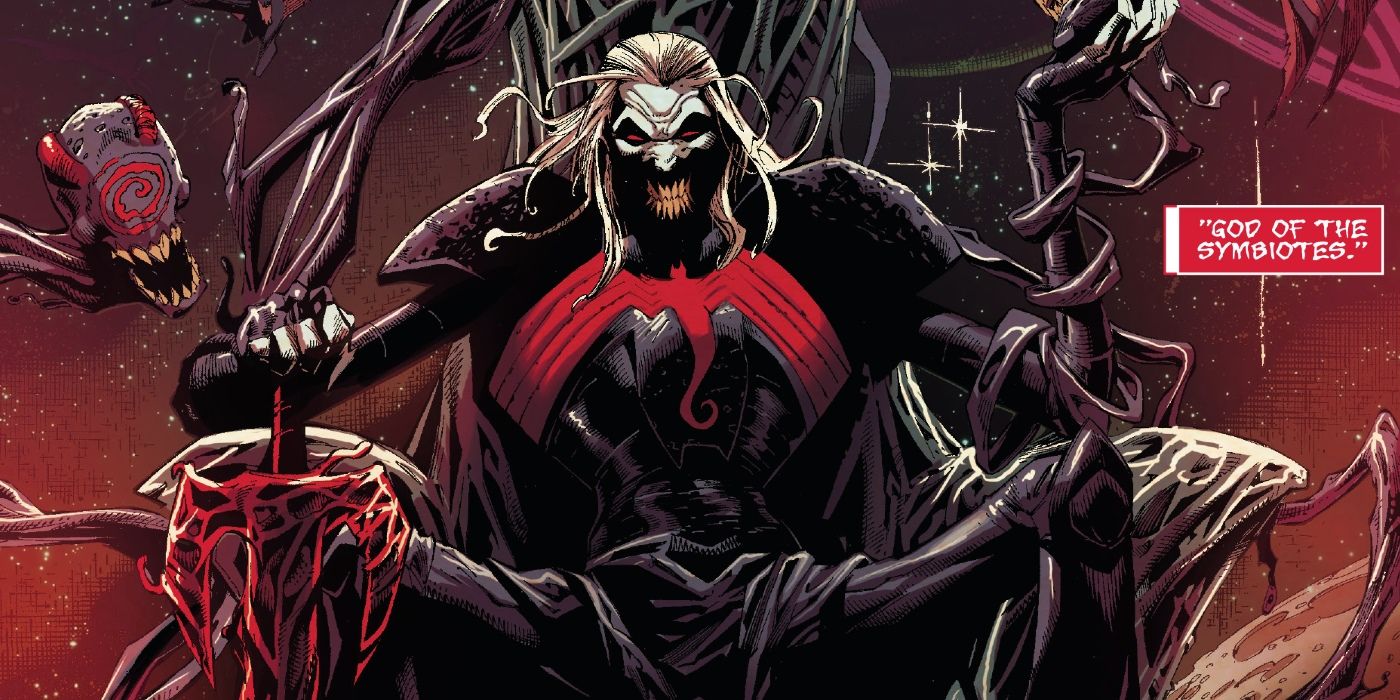 Venom's Logo is Knull's, God of The Symbiotes

The current Venom reboot from Donny Cates and Ryan Stegman has changed the cosmic side of Marvel's comic history in some big ways, revealing the true origin of the symbiotes and their creator, one of the Elder Gods of the Marvel Universe. Before the Celestials set about shaping the universe, there was the Abyss - and it had one ruler, named Knull. To fight back the light Knull forged a blade out of his living, black Abyss to slay one such Celestial. This blade would become the first symbiote, with which Knull would conquer the universe built where his Abyss once rested.

This is the new history told to Eddie Brock just months ago in the pages of Venom #4, when an ancient symbiote dragon emerges from S.H.I.E.L.D. containment to terrorize New York. When Eddie challenges the creature, it parts to reveal the Host controlling it: Knull himself, in the form of a pale-faced man in a suit of symbiote armor... with the famous winged, horned Venom logo emblazoned on his chest. The only difference being the tail of said winged dragon.

The implications are confirmed as the story continues, showing the symbol to be the one chosen by Knull upon leaping into war with his first symbiote blade, All-Black the Necrosword in hand (the same weapon seen back in 2015's Thor: God of Thunder epic). And if the red color is making it hard to see Venom's logo as that of Knull, take a look at how he first appears in the full armor: 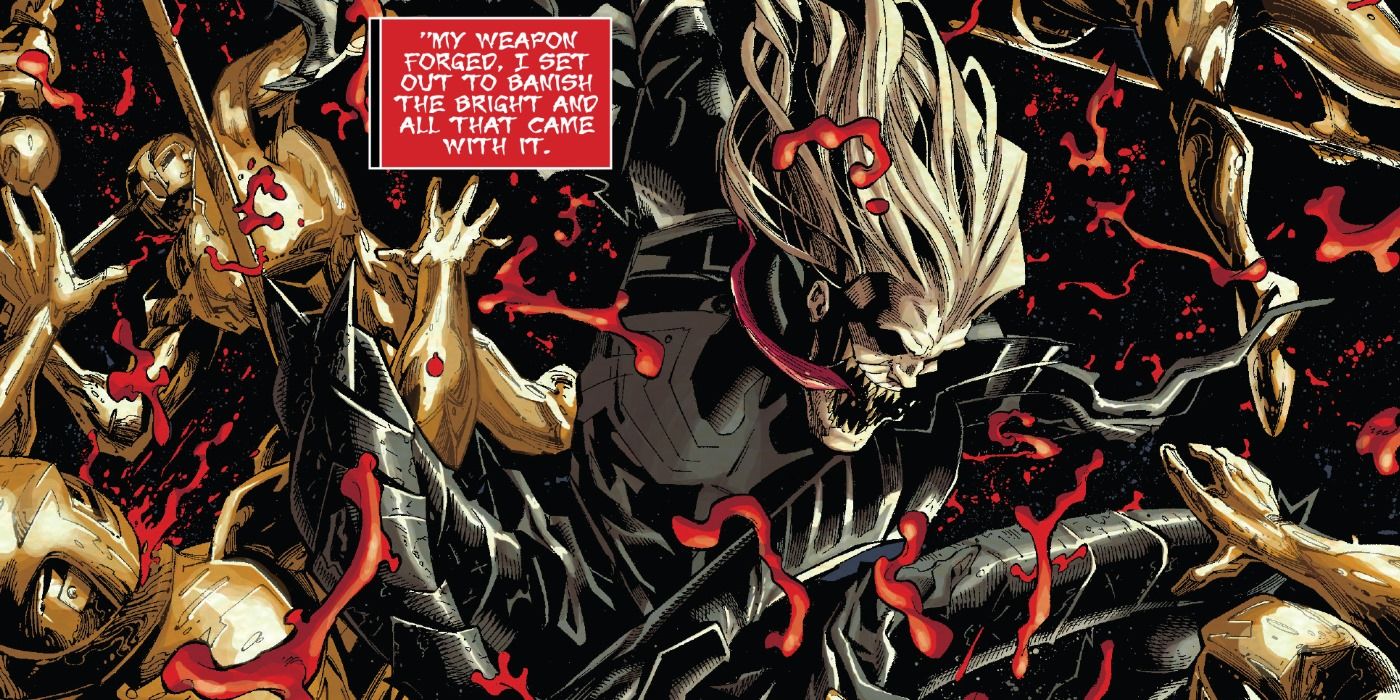 So how could Knull, God of the Symbiotes be forgotten? When Knull's connection to the millions of symbiotes he created was cut - thanks to an ancient blast from Thor - they claimed new Hosts, and eventually rallied to imprison Knull. Their plans worked, and over millennia the symbiotes forgot (or at least Eddie's did, being so long removed from the symbiote Hive Mind). But when Knull reconnects Eddie's symbiote to his own power once again, a new insignia forms upon it in response, unlocking its full memories and new powers, including remembering the true purpose of the Venom logo's "stripes," which unfurl into demonic wings like Knull's.

The symbiote's love for Eddie reunites them as Venom, of course. But for movie fans, the emergence of Knull shows a direct way of Venom's ancient insignia forming upon its chest - even if the symbiote itself isn't sure whose idea the logo really was. Now, if only there was some pivotal life moment, or key event in a symbiote's lifespan expected in Venom 2 that would connect Eddie's symbiote to the larger Hive Mind...

The Birth of Carnage Can Give Venom His Logo 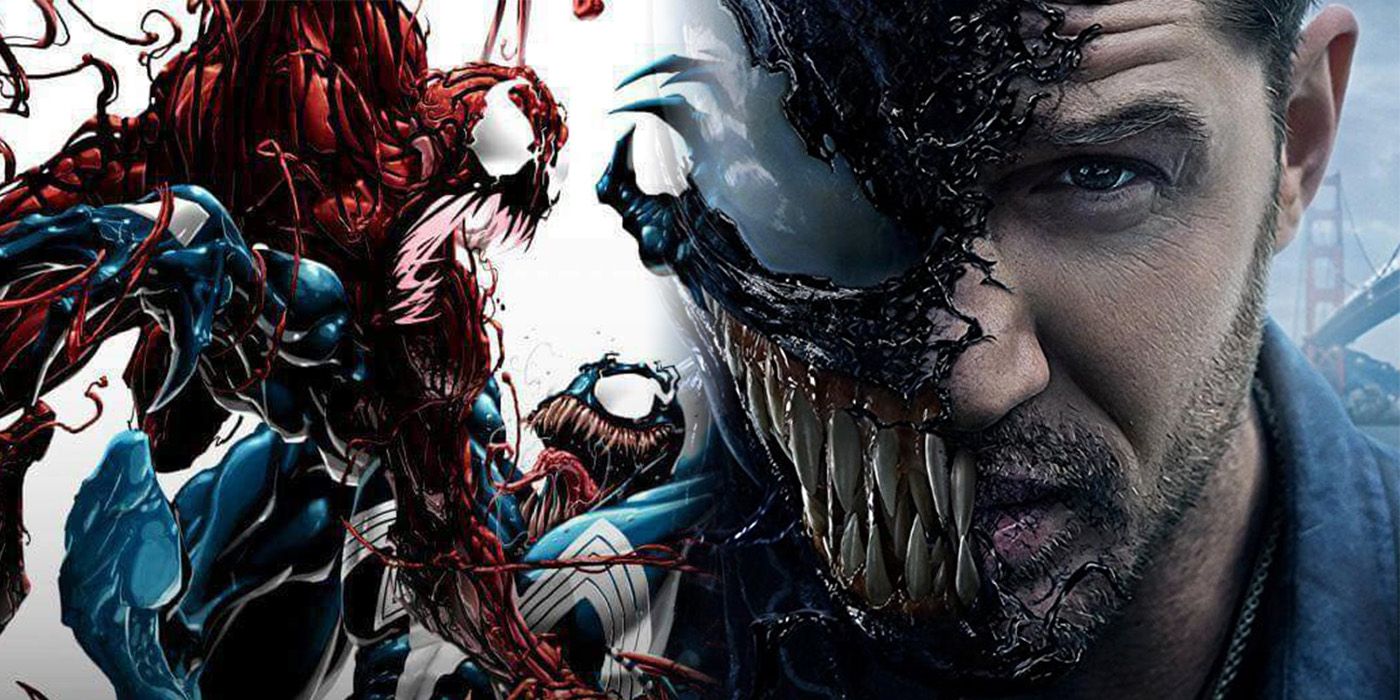 As the Marvel fans certainly know, the Venom post-credits scene introducing Woody Harrelson is as direct a tease for Venom 2 as one could possibly have. Cletus Kasady, a.k.a. Carnage becomes a symbiote serial killer when Eddie unknowingly leaves behind a spawn of his own symbiote. The symbiote bonds with Cletus, and both sides of Venom are now responsible for bringing him down.

In the comics this surprise spawning began a new chapter of Venom's history, and fans will hope for the same on film. But most of those fans will probably hope Venom 2 makes a bigger deal of the symbiote spawning than the comics, as the idea of anything unknowingly giving birth is a little silly (the most recent time Eddie and the Venom symbiote gave birth was a larger affair). And since ignoring Spider-Man isn't a problem for giving Eddie his ancient logo in Venom 2, the symbiote reproducing seems as fitting a time as any to connect to the Hive Mind in preparation.

No need to complicate things further, or even explicitly detail the history, or existence of Knull in Venom 2. The comic fans will know what the logo means, whether it sports the dragon tail of Knull or a subconscious tweak by Eddie to the body of a parasite (nice callback). The fans who just want the logo returned will be just as pleased, and it will all be connected to Venom's true origin story - not the Spider-Man version we all believed was the truth.

MORE: Every Venom 2 Update You Need To Know