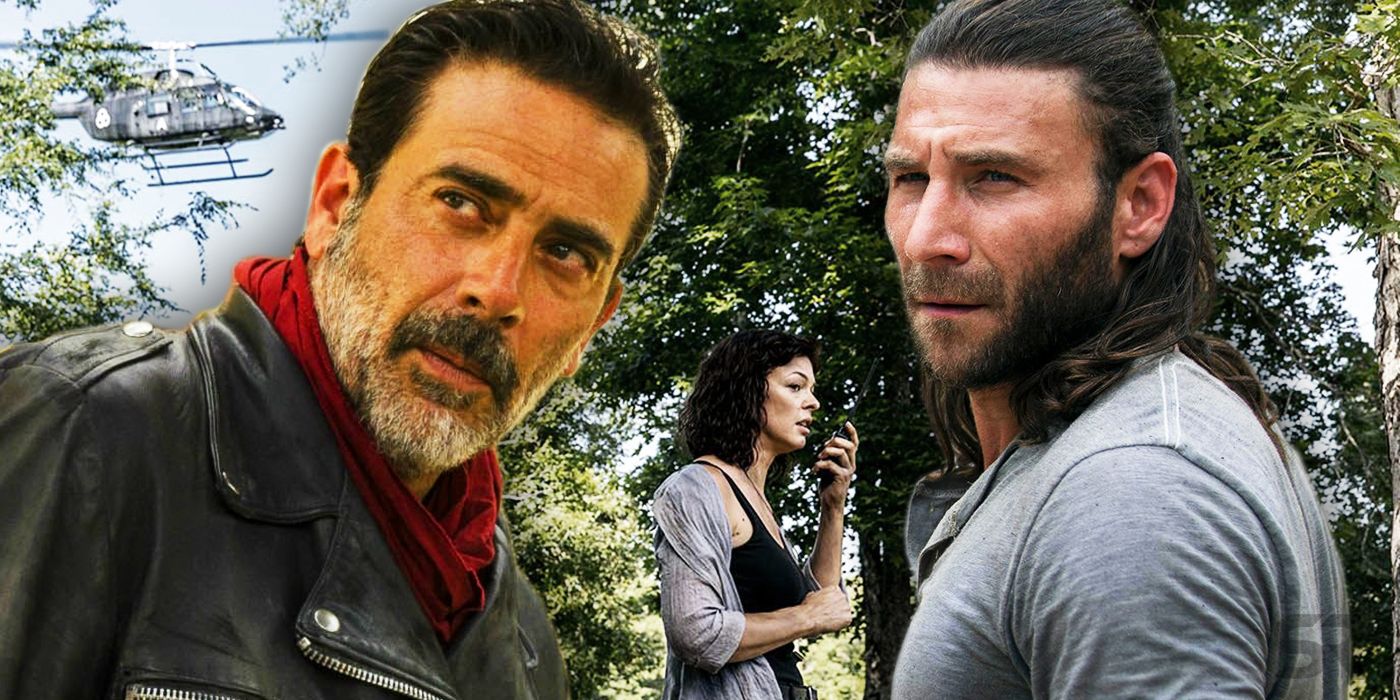 The Walking Dead season 9 episode 2, "The Bridge" left us with some big questions. Despite being only a couple of episodes in, The Walking Dead's latest run has been incredibly eventful and radically different. After an 18-month time skip, Alexandria and its surrounding communities are working together and thriving, as Rick Grimes seeks to re-establish some kind of civilization amid the zombie apocalypse.

However, the road to establishing this goal has been far from plain sailing. In The Walking Dead season 9 premiere episode, a routine supply run ended in the death of very-obviously-doomed newcomer, Ken. Then, just as Rick and Michonne were discussing re-introducing the rule of law, Maggie had political rival Gregory executed for a botched assassination attempt. Life didn't get much easier for Rick in season 9, episode 2 this week, with escalating tensions at the Hilltop and Sanctuary boiling over during the group's mission to rebuild a bridge and trade shipments mysteriously vanishing en route. At least Jerry has a girlfriend though.

While the second installment of The Walking Dead season 9 was certainly eventful, it also raised a number of pertinent questions and further developed some pre-existing mysteries. Here are the 6 most pressing unanswered questions from the episode. 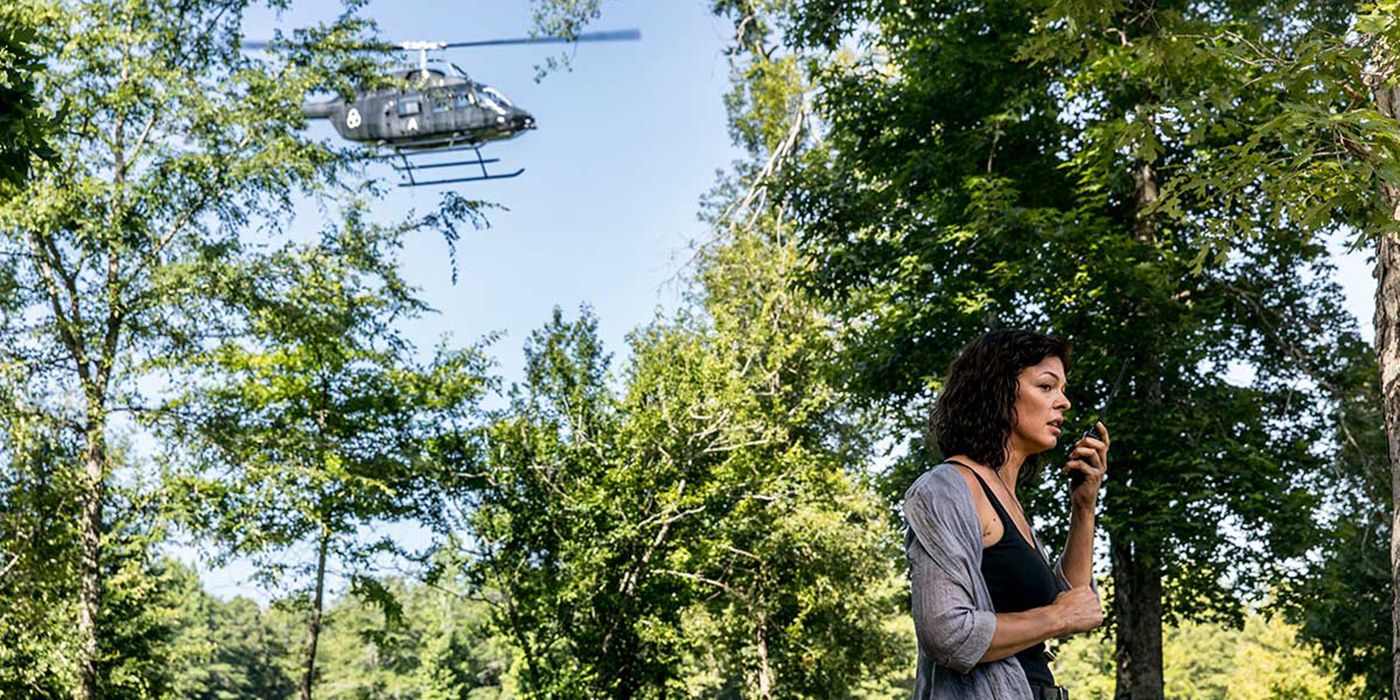 The ongoing helicopter mystery returns in The Walking Dead. Last season, Rick Grimes caught sight of an airborne chopper and was understandably puzzled at who could be flying such a vehicle around during the apocalypse. Shortly after, it was revealed that the leader of the Scavenger group, Jadis, was somehow linked to the enigmatic chopper, with a line of communication to the person or people piloting it and a landing helipad located in her old Junkyard settlement.

This week's episode confirmed that although Jadis, or Anne as she's now known, has joined Rick's group, she hasn't revealed her secrets to them and after a night of passion with Father Gabriel (which, given how it came out of nowhere, is a mystery in itself), Jadis once again spied a chopper hovering in the night sky and looked noticeably concerned by its presence. The real story regarding this scene is Jadis' worried reaction. Clearly, she and the helicopter's owners were allies at some point, why would she be so concerned to see them now?

The Walking Dead's helicopter mystery is likely going to rumble on for a while yet and although this latest development only serves to create further questions, it also reminds viewers of this ongoing story arc and reassures them that an explanation is on its way.

Who's Attacking The Saviors? 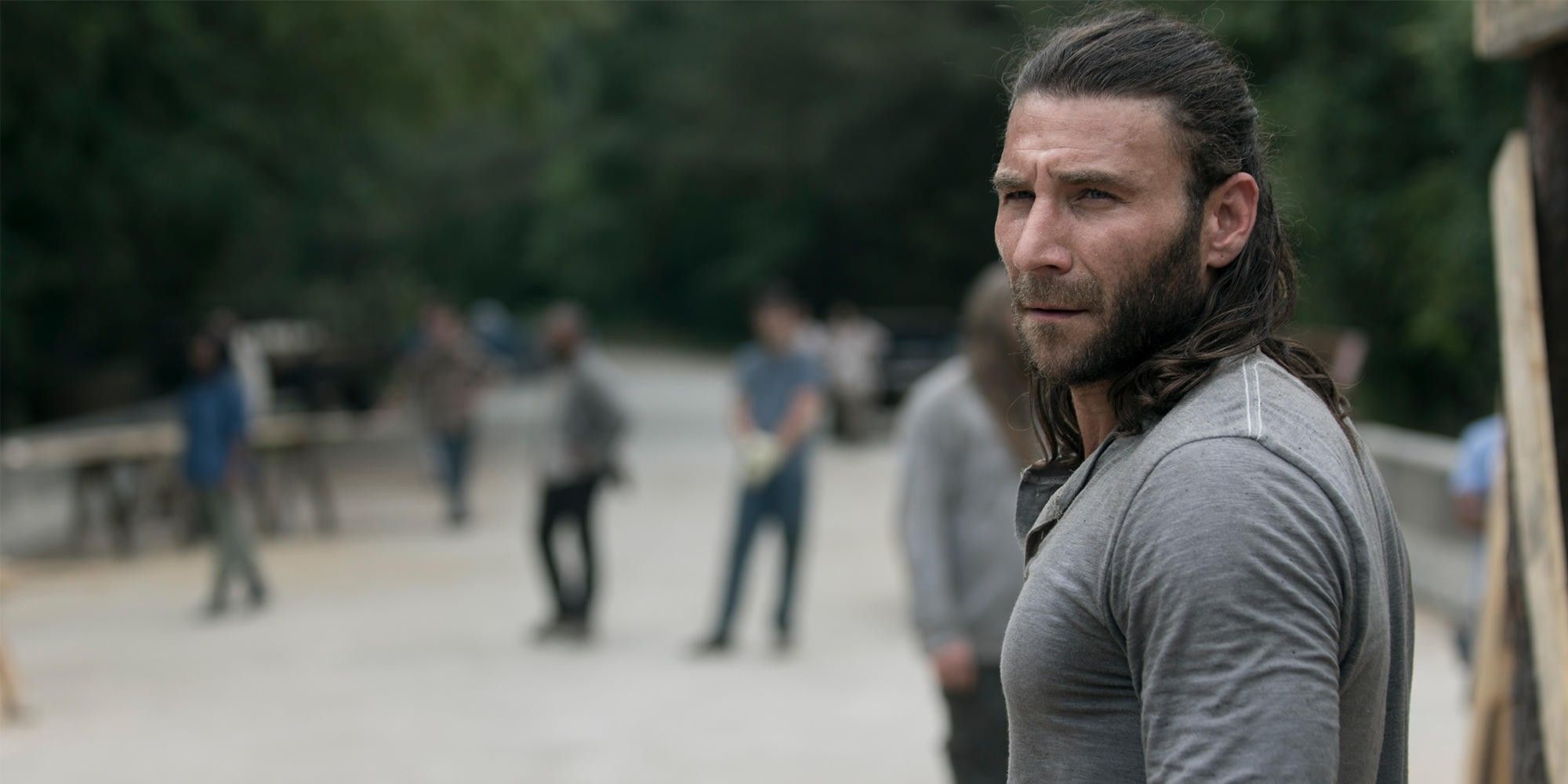 The most significant new question raised in "The Bridge" is who exactly is behind the disappearances and attacks on various members of the Saviors. To no one's surprise, not every Savior is on board with the Rick Grimes revolution and this discontent caused some of the group to abandon the bridge-building project. None of them made it back alive and, to make matters worse, an ethanol shipment from the Sanctuary also went missing.

Initially, suspicion might turn to The Walking Dead season 9's announced antagonists, the Whisperers, who are known in the comics to attack enemies stealthily and silently. However, that fails to account for why only Saviors are being targeted and Justin's reaction during the final scene wasn't one of a man who'd just come face to face with a zombie-skin wearing assailant; it seemed he knew his attacker.

There are a few characters in The Walking Dead who might want to dispose of unruly Saviors. Daryl would be the most obvious, as someone who clearly thinks the group should've been slaughtered. Carol is another suspect, given her history of brutality and new position as leader of the Sanctuary. Or could a Savior such as Alden, who is desperate for the partnership with Rick to succeed, be trying to clear out the more troublesome members of his own group?

Read More: The Walking Dead: Who We Think Is Killing The Saviors

Can Daryl Live In Rick's World? 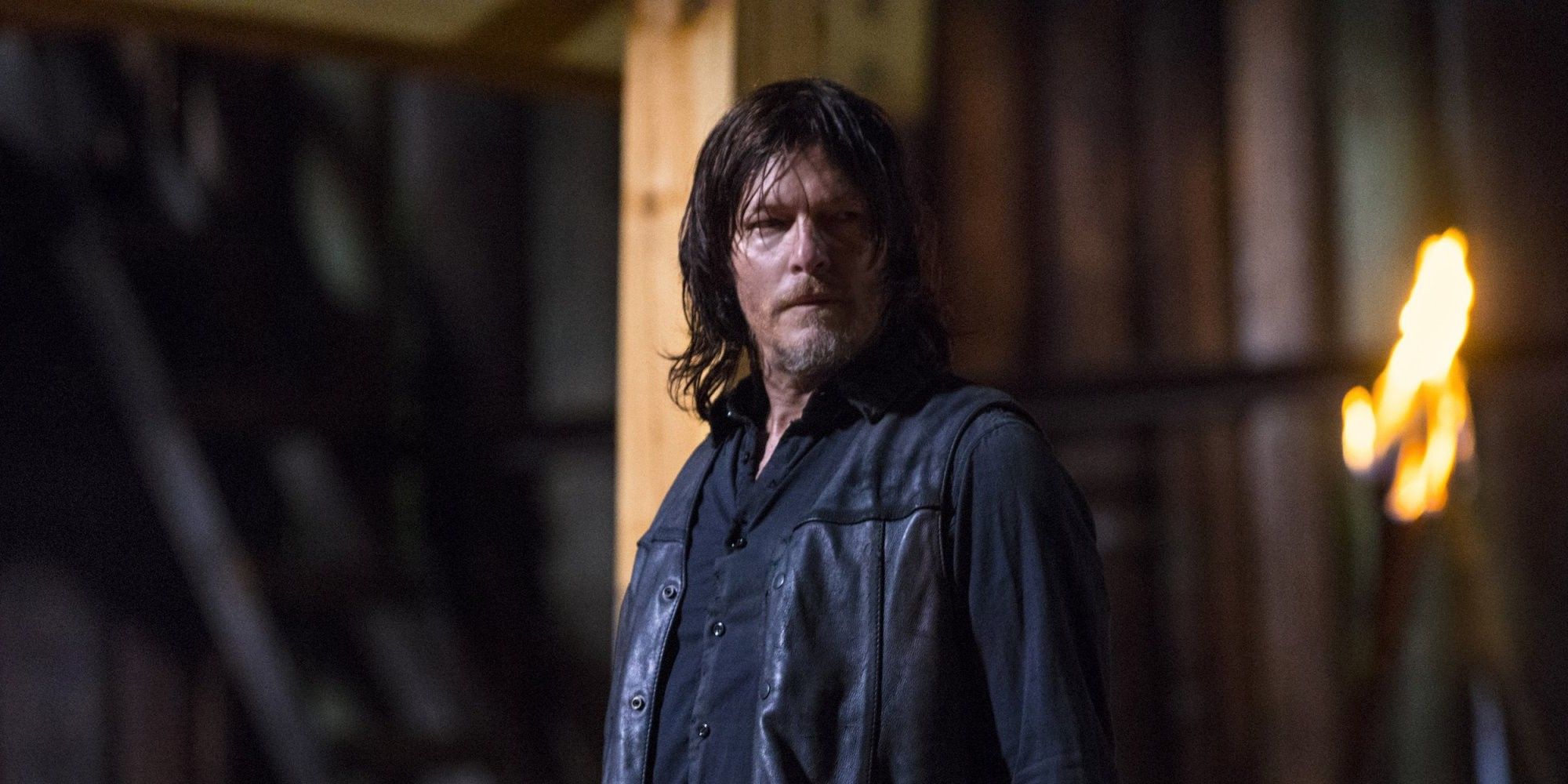 Whether Daryl is responsible for the Savior attacks or not remains to be seen but whatever the outcome, a sizeable question mark still hangs over his ability to assimilate back into the civilized world. Daryl is a savage survivalist energized by the post-apocalyptic landscape and openly admits that he'd rather be surviving on the road with a small group of trusted friends than living in a large, safe, thriving community. Tragically, the more Rick develops his new world, the bigger the gulf between himself and Daryl seems to get.

Under normal circumstances, this conflict of viewpoints might indicate an imminent stint away from the main group for Norman Reedus' character. However, it's Andrew Lincoln's Rick who has been confirmed as leaving the show. This would perhaps suggest that rather than giving in to his instincts, Rick's exit will force Daryl to deal with his hangups, settle down and fully join the effort to rebuild civilization. Aaron's line about Daryl making a good father was arguably teasing exactly that.

Page 2 of 2: More Questions From The Walking Dead Season 9, Episode 2 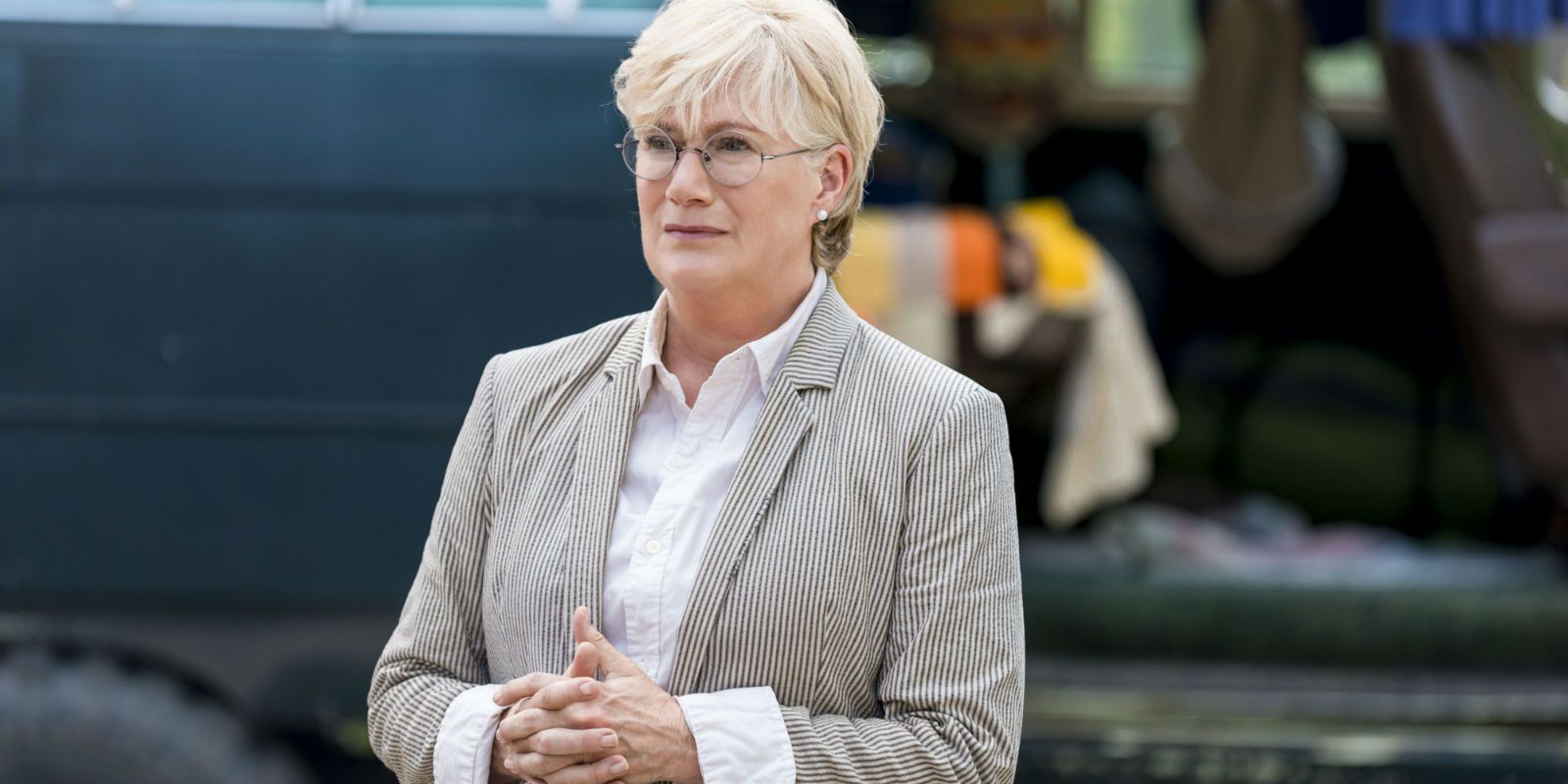 Has Maggie's Exit Already Been Set Up?

Another character set to leave The Walking Dead in the near future is Lauren Cohan's Maggie. Unlike Lincoln, however, it seems that Cohan isn't set to leave the show permanently and producers are hoping the actress will return further down the line. With the character still a key part of the The Walking Dead comic series, the reasons behind Maggie's departure were a mystery heading into season 9 but "The Bridge" may have just sewn the seeds for her exit.

Throughout the episode, Maggie's decision-making is called into question by Michonne, Tammy and Jesus but by the final credits, the Hilltop leader has made amends with all three, agreeing to send food to the Sanctuary and promising to discuss a legal system with Michonne, while releasing Earl to appease Jesus. And it was a passing comment during a conversation with Jesus that potentially hinted at why Maggie might leave.

Last season on The Walking Dead, a mysterious character named Georgie appeared, offering help to Maggie and providing her with a mightily convenient post-apocalypse handbook in exchange for some old records. In "The Bridge", Jesus stated that Georgie is intent on bringing Maggie over to her own community (which may or may not be the comics' Commonwealth), and although Maggie has refused her advances thus far, it would be the perfect way to remove Cohan from the show while keeping her available for future seasons.

Is The Negan Threat Really Over? 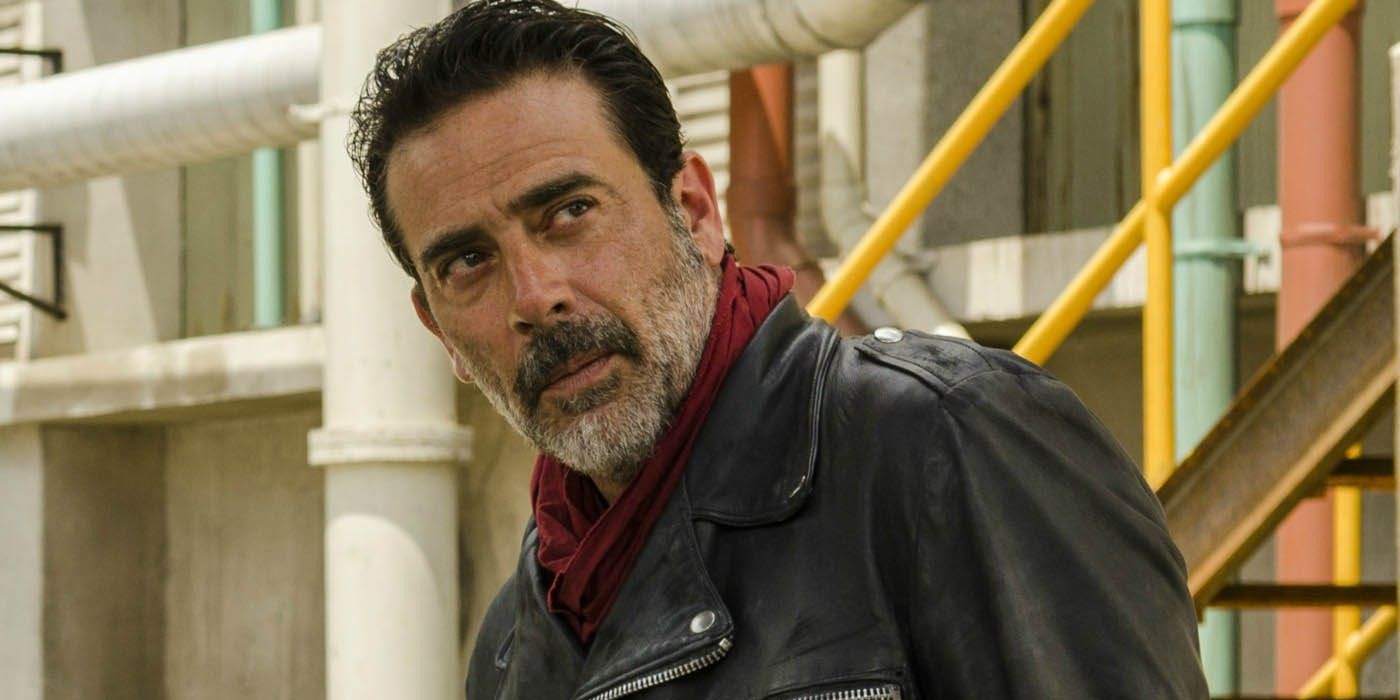 The Walking Dead season 8 saw the conclusion of the "All Out War" arc, culminating in Rick finally defeating Negan and locking him up in jail to rot. After being absent in the season premiere, Negan finally made his season 9 debut this week. As Rick updated Negan on the communities' latest successes, the villain emerged from the shadows of his cell and claimed that Rick wasn't re-building civilization, he was merely getting it ready for Negan's own return.

The scene confirmed that a year-and-half behind bars hasn't calmed Negan's temperament in the slightest and the Saviors' former leader still has plenty of menace and fight. He seemingly also hasn't given up his lust for power and perhaps even sees the current network of communities as a more attractive prize than just reclaiming the Sanctuary would be.

However, comic readers will know that Negan's post-Savior arc isn't simply a quest for power and revenge, it's a total reinvention of the character. It remains to be seen as to whether the television adaptation will follow the same route but actor Jeffrey Dean Morgan has already hinted at his character's fragile mental state in interviews and Negan's TV arc is sure to be one of The Walking Dead season 9's most compelling.

Can The Saviors Be Tamed? 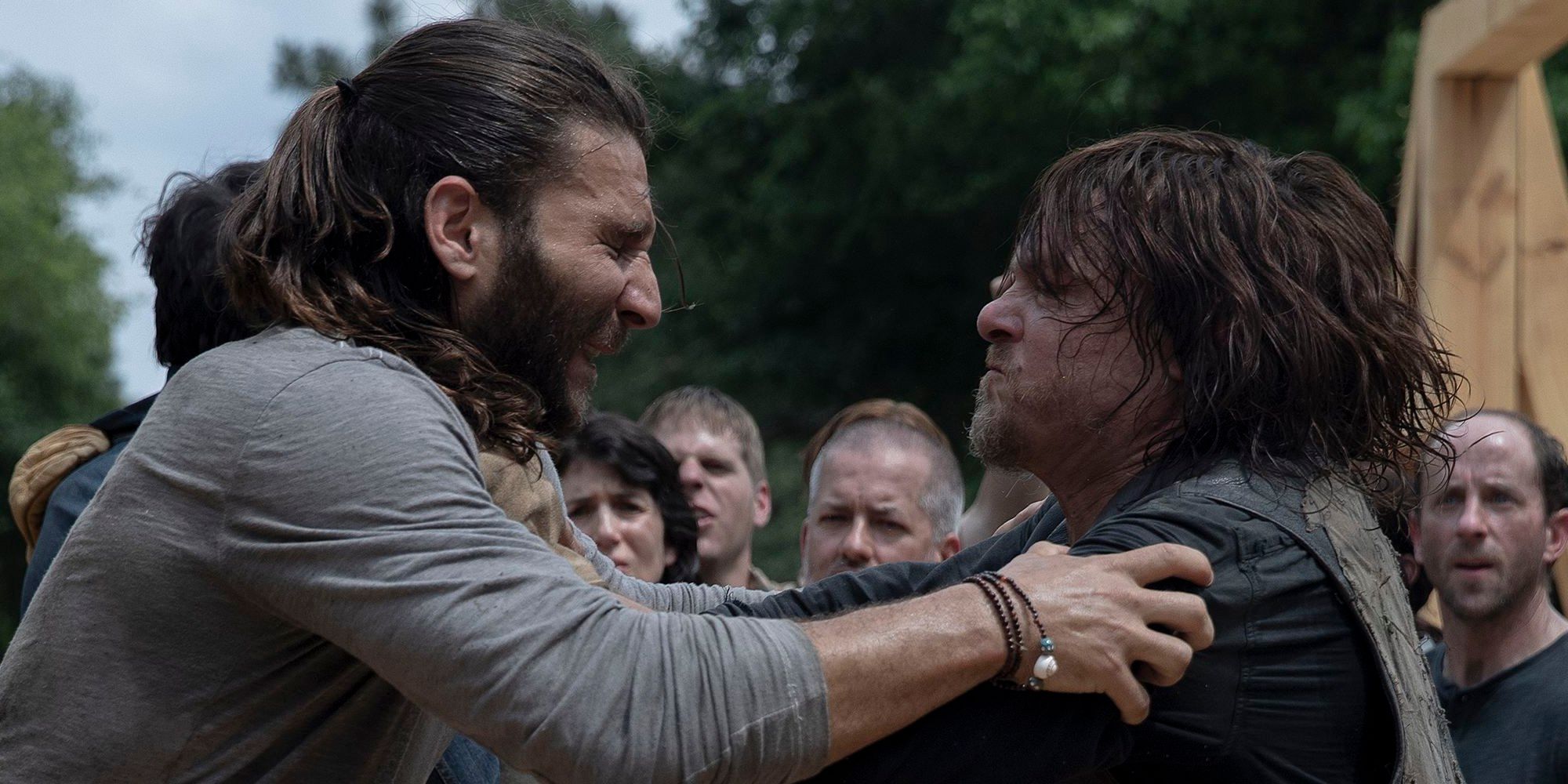 Perhaps the overriding theme of The Walking Dead season 9, episode 2 is whether Rick's decision to try and include the Saviors in his new world was the right call or whether he should've finished them off at the end of season 8. A definitive answer to that question has yet to be provided and for every cooperative Savior, there's one failing to set off a siren or dropping a log on Aaron's arm.

The issue continues to divide Rick's group and the situation is only likely to get worse once news of the missing Saviors begins to spread. Last week's episode showed that there is still support for Negan within the Sanctuary and this too will surely grow as the group's living situation worsens. "The Bridge" was careful to highlight both sides of the moral dilemma but, ultimately, The Walking Dead season 9 will need to show whether or not sparing the Saviors will come back to haunt Rick.

With mystery aircraft, rogue Saviors and an unknown attacker lurking in the bushes, The Walking Dead season 9 has plenty of ground left to cover and with only two episodes aired, there could be plenty more questions lined up for viewers. Not all of these mysteries are guaranteed to be cleared up in the current run of episodes but, certainly, The Walking Dead will not be short of talking points in the coming weeks.

Next: The Walking Dead: Biggest Questions Left By The Season 9 Premiere

The new consoles are only a few weeks away and both the PS5 and Xbox Series X will have much faster loading times. Bu...
Read More