The Man in the High Castle: NYCC 2018 Interview 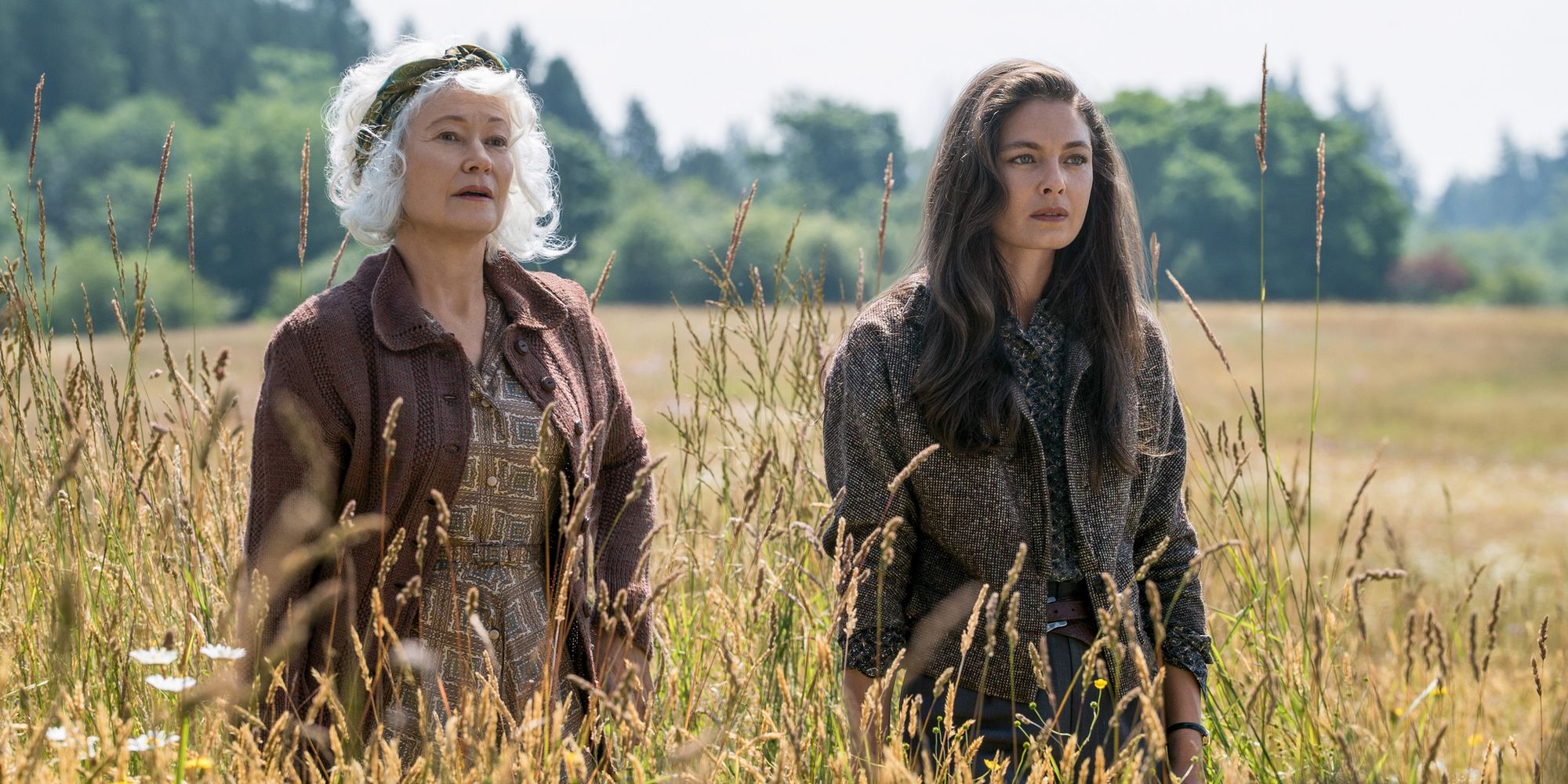 The Man in the High Castle is an Amazon original-drama that has just released its third season. The series is based on the novel of the same name by Philip K. Dick.  Taking place in 1962, it is an alternate history where the Axis won World War II and the United States is conquered by Nazi Germany and the Empire of Japan.  David Zucker is an executive producer on The Man in the High Castle and is the current President of Television for Scott Free Productions.  Isa Dick Hackett is an executive producer on the series and the daughter of author Philip K. Dick.

Screen Rant: Jump in to some of the questions from the show. Now I want to talk about the third season is seemingly expanding the rules of the game with characters who were able to jump between dimensions on their own. How far do we lean into the science fiction in the third season?

Isa Dick Hackett: We do a good deal. Um, and we also introduce a relatively new concept which comes from some sequel chapters that my dad wrote for a sequel to the original novel that was never published. So it was fun to bring in this new, big idea. And you'll see it.

Screen Rant: Interesting. That's good. So, judging from the trailer also, there's a big thrust into third season with the actual uprising. How was the scope and budget changes? Your character has gone through quite a journey from the unwitting citizen to the face of the resistance or the face of the resistance in the marketing. How will the journey change this season coming out for her?

Alexa Davalos: It changes tremendously. She's become rather fixated on, on this aspect of ultimately this supremacy that is a threatening, not just our reality, but every reality. So she's incredibly driven to, to stop that as much as possible, but there's a whole sort of emotional journey as well that that coincides. She's taken on a different, a totally different focus as far as the resistance in different aspects.

Screen Rant: Chelah, Helen was the first deal with Thomas's decision at the end of the season. How has she coped with that loss and how provocative will she become?

Chelah Horsdal: Well, the second question? You'll get the answer to that tomorrow. We see Helen go on a journey that I don't think anyone could have anticipated watching her story up until this point. How does anyone deal with the loss of a child under any circumstances? These being particularly devastating because, , as we've discussed at the reason that Thomas has gone is because we did a really good job of raising the perfect Nazi and he believes in this ideology that I'm ultimately had made means that he was taken away from us. So I think dealing with that price and we start to see her really unmoored in season three because she doesn't really know where she belongs. And what, the thing that is most important to her, her role as a mother and as a wife had been taken away in a way. So yeah, we see her do some pretty radical stuff this season. 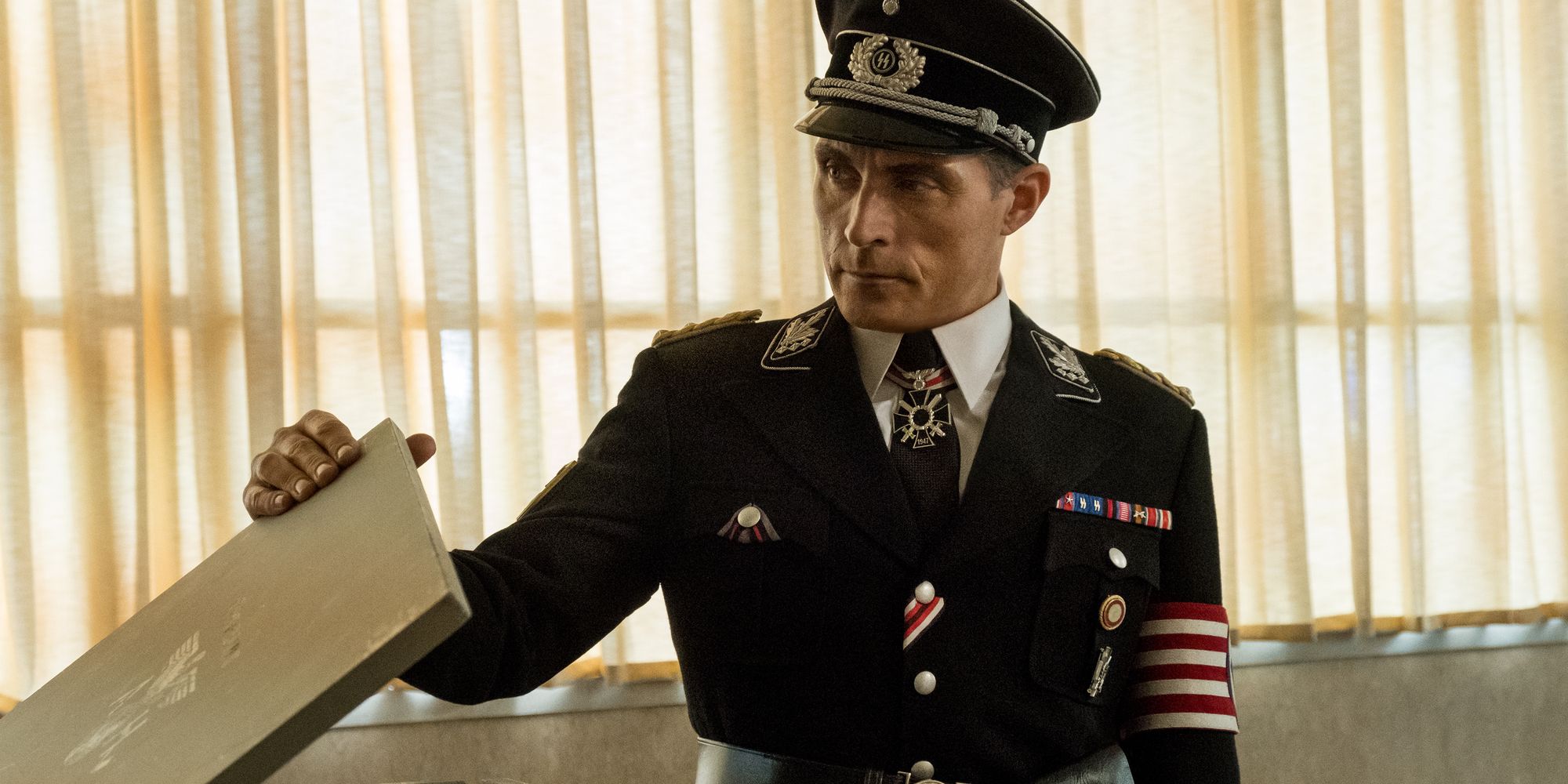 Screen Rant: Joel your character is a no nonsense cut throat, kind of guy, does playing that character bleed into your real life whatsoever?

Joel de la Fuente: I think the cast will agree that I'm very much like that.

Rufus Sewell: It's become something of a problem onset. [laughter]

Joel de la Fuente: I admire his ability to have clarity and his ability to pursue his objective of thought and theory. He goes in a straight line whenever he can. So it's been great for me because I, I don't navigate my life that way personally so it's been fun and empowering to be put in a situation where I get to do that.

Screen Rant: Now. For the cast, where would you like to see all of your characters go? Forward we get to season four and, and then for the producing. Where would you personally like to see them go if, if you were the writers of the show, per se.

Joel de la Fuente: The musical episode, Christmas episode, the episode where you go to Hawaii and Greg finds a tarantula and that's already been done, right?

Rufus Sewell: I, as far as I'm concerned, I always want my characters to be out of power and out of his element, so I would always wish for him never to attain full power because that's very undramatic. And as far as I'm concerned, I think it's always more interesting to not hold the reins. So for me, Smith is always better when he's challenged, when he’s cornered, when he's, you know, in some way the underdog. And also I would always wish for some kind of evolution.

Alexa Davalos: Yeah. I want to be the leader of the resistance.

Screen Rant: So you guys have slowly led off into the water by taking time as more of a sci-fi element. The first season was more of a period piece. The second season started introducing fantasy. Are you guys already thinking about what you guys are going to do for the fourth season?

David Zucker: The fourth season, so there's, I mean, I think the evolution of the show has been really exciting to experience it. It's sort of like peeling, peeling an onion, like there's, there's just more and more that you see more and more tiers I guess as you go along to theirs. Um, it's, it's exciting. It's really exciting to see also because it's, it's a really challenging show to do. It asks a lot of every department and certainly the writer's room is tasked with so many different challenges. Like you said, it's hard to put it into one genre and I think for a group of people to sort of be on top of such a complex universe challenging. And I were really excited and lucky for where we find ourselves going in season four.

Screen Rant: Super excited now. Trudy, or another dimensions version of her appears at the end of the season. How much will that, how much will this dominate Juliana over the course of the third season?

Alexa Davalos: Certainly in a lot of ways it does. Obviously physically, emotionally, mentally. Therere many layers to that, um, but I think, you know, one of the things that I, that I am very attached to is that the notion that Admunson put her in front of her, put Trudy in front of Juliana to show her tangibly, viscerally what, what is possible. So it's almost more about what Trudy represents in a lot of ways. Um, and it carries her throughout. Absolutely interesting.

Screen Rant: You guys, obviously you guys are in the course of shooting season four currently. If you guys had to sum up what we can expect without a spoiler in season four in a hashtag, what would that hashtag be? I know it's like putting you guys on the spot.

Rufus Sewell: I'm not on the spot because I just wouldn't do that. I wouldn't reduce it to a Hashtag.

Joel de la Fuente: I don't even know what hashtags are.

Screen Rant: At the end of the last season John Smith rose through the ranks as commander. As we’ve mentioned, in the world as the country has changed so much since the premier, how did playing the path of an American who becomes a Nazi affect you personally? At all? Because it is quite drastic, to wrap my head around as a viewer.

Rufus Sewell: Well, I mean for me it, it hasn't changed that much to tell you the truth and we've spoken about this a lot as far as I'm, you know, my impression is the reading the pilot and when we were doing the pilot it felt that it was very, very timely. Even then, I mean it's, it's become more so obviously unfortunately, obviously, but it's only really continued in the direction that it evidently was going roundabout the time we were filming. For me it's been a great opportunity to, to try to discover what it is in people. The, you know, the, a lot of the research, for me it was about how do people who consider themselves to be reasonable should be the kind of the good guy and their own lives. How do people talk themselves around that and still see themselves as good and you see that, you see that all the time. But in terms of the way it's affected my life, I don't think it's, it hasn't, you know, I don't think it has. We're all doing something that is very antifascist.

More: What to Expect From Man in the High Castle Season 4