Marvel Reveals the Most Powerful Guardians of the Galaxy Roster Yet

Marvel Comics today teased the full roster for its upcoming Guardians of the Galaxy reboot, the culmination of a campaign that has successively revealed new potential members of the team throughout the month. Today, it was revealed that Star-Lord, Adam Warlock, Groot and the Silver Surfer may join the team, making for perhaps one of the most powerful cosmic rosters to fly under the Guardians’ banner — maybe.

The teaser comes with the caveat that only six of the characters pictured will actually end up joining the new squad. Who will end up making the cut, and what will happen to the remaining five, is anyone’s guess at this point.

Cosmic Ghost Rider was originally revealed as the first potential member of the team back on Oct. 4. Marvel has been revealing the remaining members since Wednesday, when Moondragon, Gladiator and Beta Ray Bill were revealed. Thursday brought news that Phyla-Vell, Nova and Darkhawk may be joining the team. Today, we have a clearer look at what Donny Cates and Geoff Shaw’s cosmic roster might look like.

Of the characters revealed today, perhaps the least surprising are Star-Lord and Groot, who have been consistent members of the team for a considerable amount of time. Both have been integral to the current Infinity Wars event and its lead-up. Star-Lord even died at the hands of Gamora for a short time before his demise was undone by a Time Stone-wielding Doctor Strange.

Adam Warlock has also played a pivotal role in the event, which has centered around Gamora’s obsession with retrieving a piece of herself lost inside Soul World — a pocket dimension with which she and Adam Warlock are intimately familiar — and eventually recreating all of reality inside the Soul Stone. Curiously, Adam Warlock also died for a short time (though this time at the hands of eldritch deity Devondra) before his death was undone by Doctor Strange, also using the Time Stone.

Silver Surfer played a pivotal role in Cates’ run on the Thanos series, which, along with Gerry Duggan’s Guardians of the Galaxy, acted as the kickoff for the current event. That series saw the Silver Surfer take on the mantle of the Fallen One, a Mjolnir-wielding herald who was thoroughly done with Thanos’ reign of terror in the future. Thanos, a younger Thanos and Cosmic Ghost Rider were able to vanquish the far-future version of Silver Surfer, though rendered that future obsolete shortly after doing so. The reverberations of that event have, nonetheless, been felt throughout time.

Donny Cates and Geoff Shaw’s Guardians of the Galaxy reboot is slated to begin in 2019 and will deal with the aftermath of Thanos’ death and Eros’ subsequent retrieval of the Mad Titan’s last will and testament. 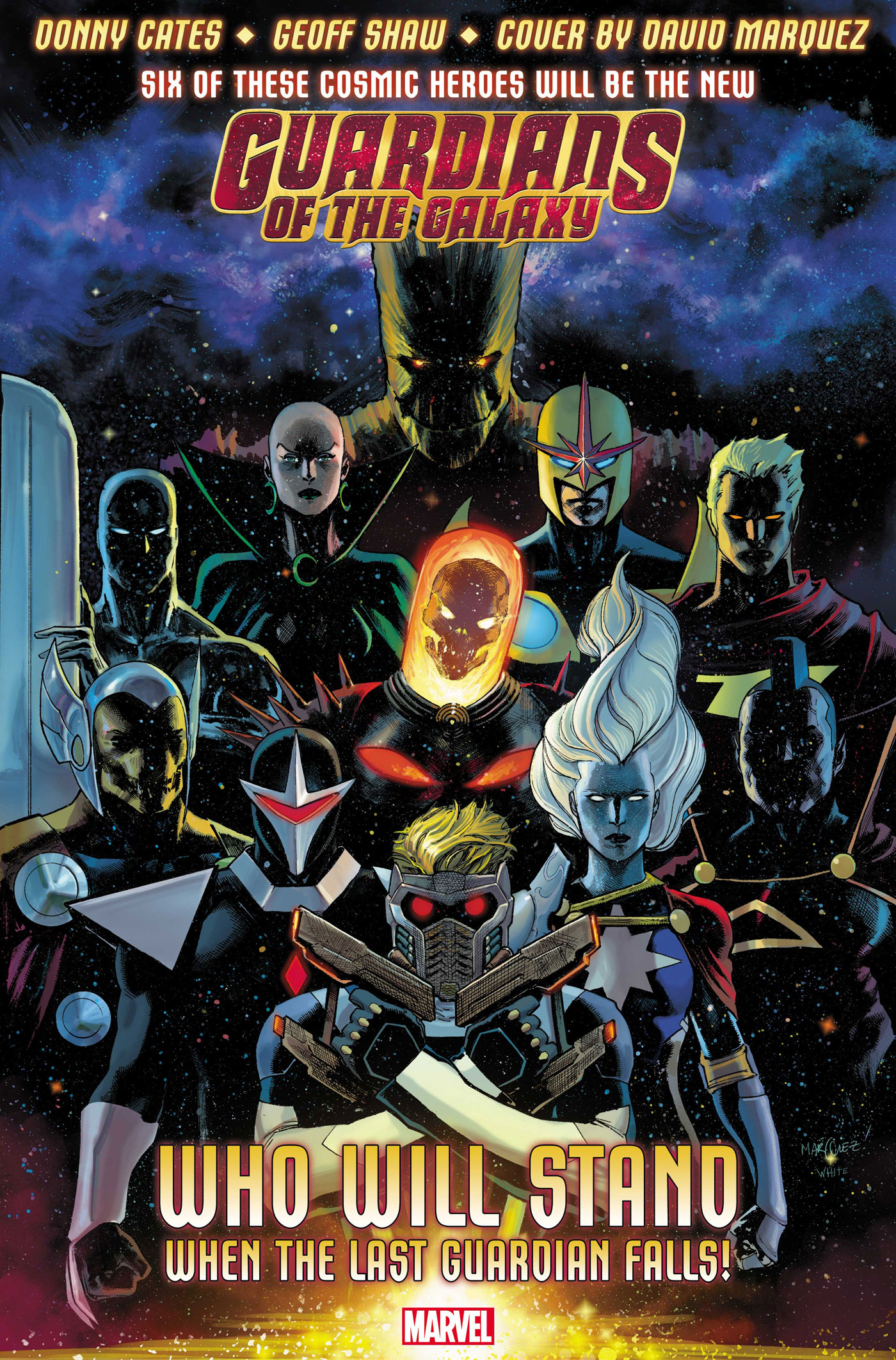 The post Marvel Reveals the Most Powerful Guardians of the Galaxy Roster Yet appeared first on CBR.