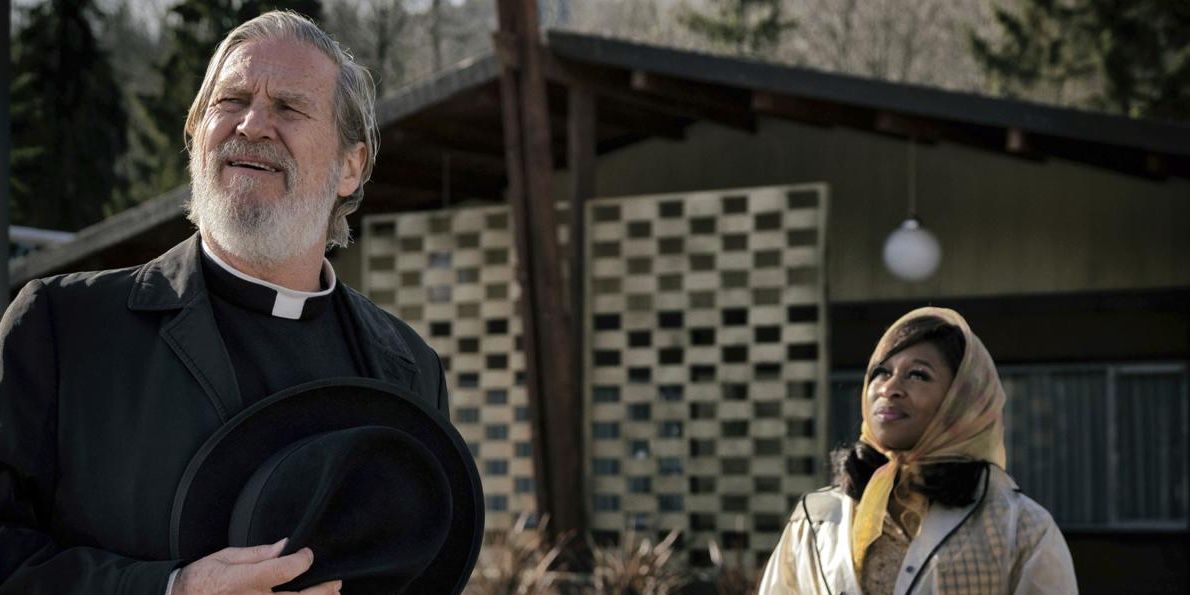 Jeff Bridges is a legendary actor who has won the Academy Award for Best Actor and been nominated six other times.  His resume includes The Last Picture Show, True Grit, and Marvel’s Iron Man.

Cynthia Erivo is an actress and singer who has appeared on both Broadway and the West End.  She has won a Tony Award and a Grammy and has recently begun a career in feature films.

Lewis Pullman is an actor who has appeared in Aftermath, Battle of the Sexes, and The Strangers: Prey at Night.

Screen Rant: Hello guys. What was it like doing such an intense scene with an Academy Award winning actor next to you?

Lewis Pullman: Well, I've used this analogy just a while ago and I'm going to use it again. But it's very much like-- it feels like a dream.  Because I grew up watching Jeff, and I love Jeff. So, it's very much like-- But Jeff’s so good about reminding you that he's none of those-- Whatever idea you have about him, kind of vanishes when you're with him.  Because you're good about having—You connected--

Jeff Bridges: When you say dream. It is like a dream, yeah.

Jeff Bridges: Right now, this is kind of a dream.

Lewis Pullman: Yeah, for sure.

Screen Rant: Did you play multiple roles on set? Were you the set photographer as well, Mr. Bridges?

Jeff Bridges: I was, I like to do that. I have a funny kind of camera called a Widelux. It takes these peculiar pictures. I make books for the crew and the cast. And yeah I’m doing this.

Screen Rant: Now this is very different for Hollywood movies. The music was in the foreground and you're doing a capella scenes in front of the cast. What was that like?

Cynthia Erivo: It's something that I'm quite used to coming from stage and coming from Broadway and all of that stuff.  I'm used to singing live in front of people. But I think that when you get to take 14 on something, the pressure is on to make sure that the quality stays the same. And that was the thing that I wanted to make sure that everyone still had the quality of sound that they needed in order to do the scene. I didn't want to falter. Because I knew that that was part of everyone's experience of the scene. So, yeah.

Screen Rant: Was there a difference in your performance whether you're performing on the California side or the Nevada side?

Cynthia Erivo: [LAUGHS] I don't think there was.  I don’t know. Was there?

Screen Rant: For any of you?

Cynthia Erivo: Did anyone notice?

Lewis Pullman: Warmth and sunshine to the west.

Jeff Bridges: There you go.

Lewis Pullman: Hope and opportunity to the east.  Those things kind of soak into you.  A little bit.

Cynthia Erivo: We did.

Jeff Bridges: You know, it's filled with great scenes. You know, each one. I don’t have one, not one that pops out to me.

Screen Rant: Excellent. What was it that sold you on this project? Why did you come on to it?

Jeff Bridges: For me, it's the kind of movies that I like to see. Where you don't know what's going to happen next. The filmmakers are ahead of you.  And I love that. That's what brought me to the project.

If you’re a fan of Capcom, Clover, horror or just good video games in general, please set aside part of your week to ...
Read More

Part Time UFO, the HAL Laboratory mobile game ported to Switch today, is a charming little project about an alien hel...
Read More
Back to News