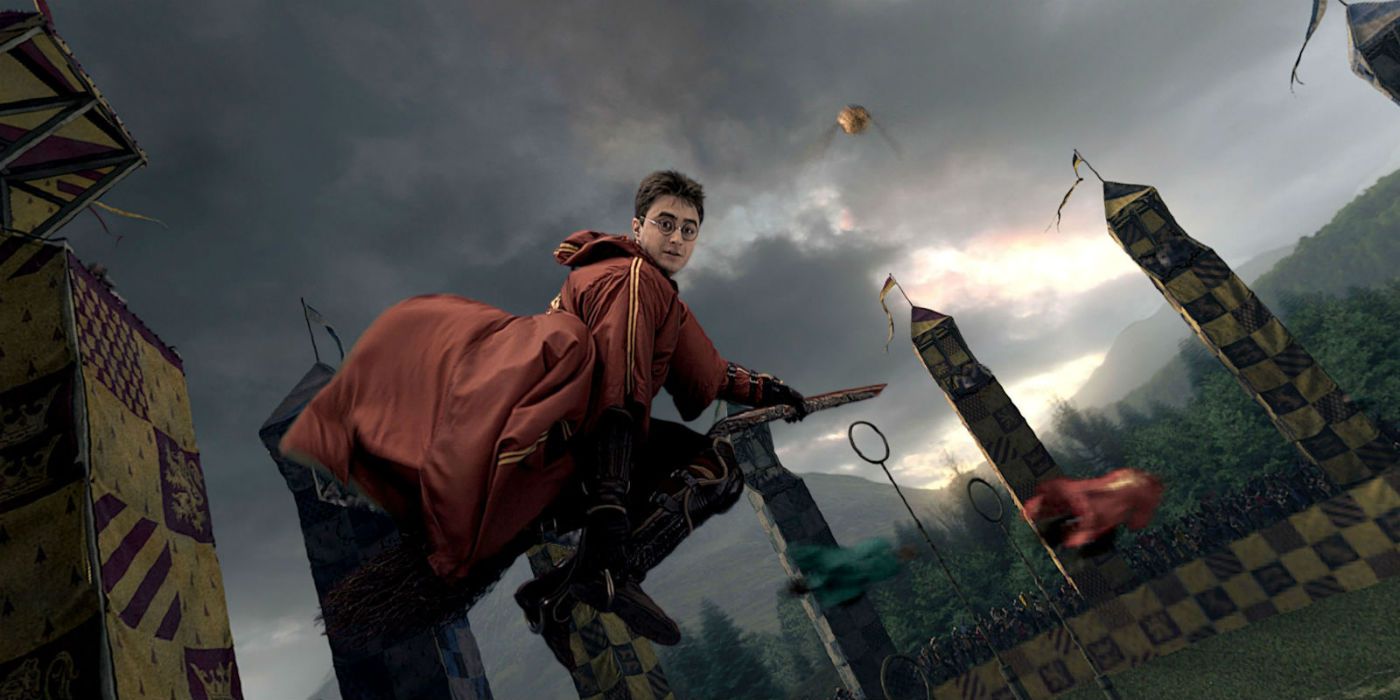 Harry Potter author J.K. Rowling explains how the scoring system in Quidditch actually makes a lot of sense. Quidditch is a popular sport in the Wizarding world where players ride upon broomsticks in order to throw the ball- called a Quaffle- into the other team's goal posts. Each team also has one Seeker who is tasked with chasing a tiny golden ball called the Golden Snitch. If the Snitch is caught, the team wins 150 points, which typically ends the game.

Quidditch was first introduced to readers in Rowling's Harry Potter and the Philosopher's Stone in 1997. Likewise, the sport was adapted for the movie adaptation, which came out in 2001 starring Daniel Radcliffe, Rupert Grint, and Emma Watson as Harry Potter, Ronald Weasley, and Hermione Granger respectively. While the sport of Quidditch was never really crucial to the plot of the books or movies, the game was a popular pastime for Harry and eventually Ron. While Harry turned out to be an incredible Seeker, his father James played on the Gryffindor Quidditch team as a Chaser. Each team had three Chasers, who were in charge of earning points by throwing the Quaffle into the goal hoops. While the sport has been featured in several of the books and movies, some people over the years have claimed that the scoring system doesn't make any sense, but Rowling has now set the record straight.

Rowling took to Twitter to explain how the scoring makes sense and the meaning behind the game in general. When responding to a Quidditch critic, Rowling compared the sport to the human condition. She explains that chasing the Golden Snitch can be compared to getting a lucky break in life, but that using teamwork to get the Quaffle through the hoops can also make a team win if they have good teamwork and persistence. Rowling's full Tweet can be seen below. 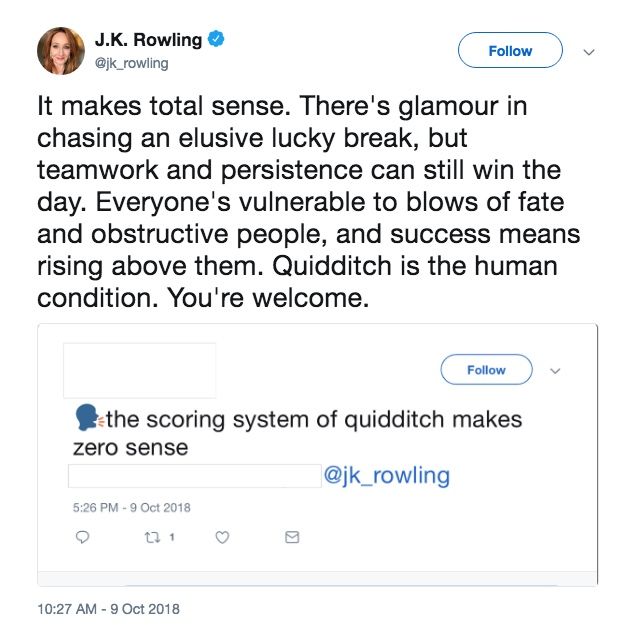 Even though the Harry Potter series is more than 20 years old, the franchise is still as popular as ever. After the last film in the main Harry Potter series was released, Rowling announced that they were making a new series based off of the book Fantastic Beasts and Where to Find Them. The second film in the series titled Fantastic Beasts: The Crimes of Grindelwald is set to be released next month, but fans will always have a special spot in their hearts for the original set of books and movies focusing on Potter's days at Hogwarts.

Elements of the Harry Potter series will always be a part of popular culture. Even though flying around on broomsticks is impossible, as far as Muggles are aware, college students created a real-life version of Quidditch in 2005. A Quidditch Premier League has even launched in the UK. Rowling writes a lot for the website Pottermore, which gives an in-depth look at several characters and elements in the fictional world. Even though certain elements of the game might have not made sense before, Rowling has once again reached out to fans to further explain the world of Harry Potter.

This week on Snapshots we check out get a bit creepy, find a lonely pumpkin, go hunting, do some hovering, enjoy the ...
Read More
Back to News