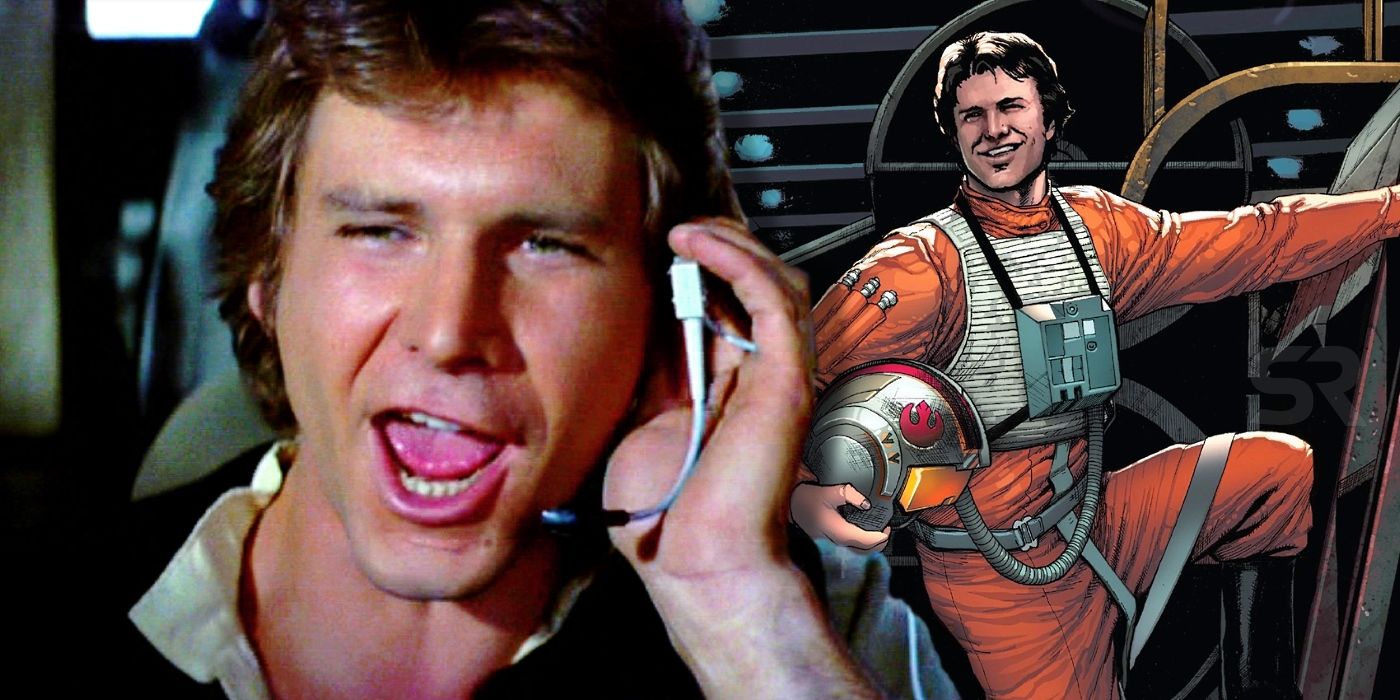 Han Solo never loved a spaceship like the Millennium Falcon, but you can't claim to be the best pilot in the galaxy without flying one of the Rebellion's famous X-wings. And thanks to a new Star Wars comic, fans finally get to see Han Solo do exactly that.

The mission that sees Han not only pilot an X-wing as wingman to Luke Skywalker, but eventually take over his duties in leading Rogue Squadron into battle is undoubtedly one of the coolest untold tales of the new Star Wars canon. Fans can send their thanks to the talent behind Star Wars #55, led by Kieron Gillen and Salvador Larroca. And if you're not yet sold on "Han Solo, Rogue Leader," then allow us to run down the highlights of this historic fight, previously unknown to Star Wars historians.

Oh, and the same mission also includes Princess Leia getting behind the controls of an Imperial TIE Fighter, too.

Han Ditches The Falcon For an X-Wing 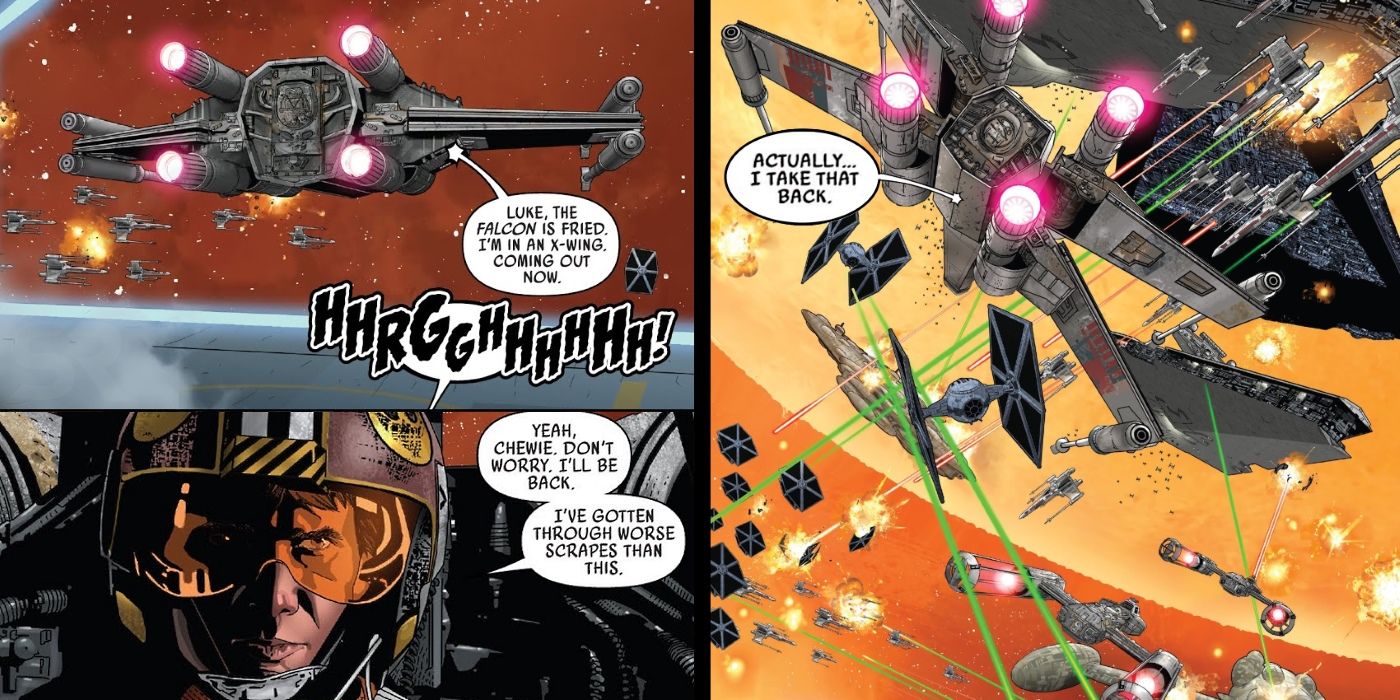 Before any fans cry blasphemy for taking Han Solo out of the Falcon, he has good reason to trade spacecraft. Shortly after Han Solo proved he was a better pilot than Darth Vader, the villainous Sith got his last laugh by damaging the Falcon to the point that Han had to crash land it into the hangar of a Rebel cruiser. After passing off the valuable intel to the appropriate authorities, Han turned to head back out into the fighter battle being waged outside the hangar. Refusing to leave Luke and his fighters behind, Han accepts that the Falcon is downed and instead climbs into a Rebel flightsuit, and behind the controls of a docked X-wing.

As thrilling as it is to see Han and Luke piloting X-wings in a dogfight - even if it's only in the comics and not the films - the fighter battles are actually just a distraction. To get the entire Rebel Fleet out of this massive ambush, they need to override the communication blocks put in place by an Imperial spy. That is a challenge jumped at by Leia Organa herself, leading a crew aboard Vader's own flagship to acquire the counter-code needed to restore communications and warp to safety.

When Vader interrupts - killing a famous Rogue One Rebel, Leia has no choice but to pilot the sole TIE Fighter left on board... putting her squarely in Han and Luke's crosshairs...

Leia, Luke & Han Fly Together For The First Time 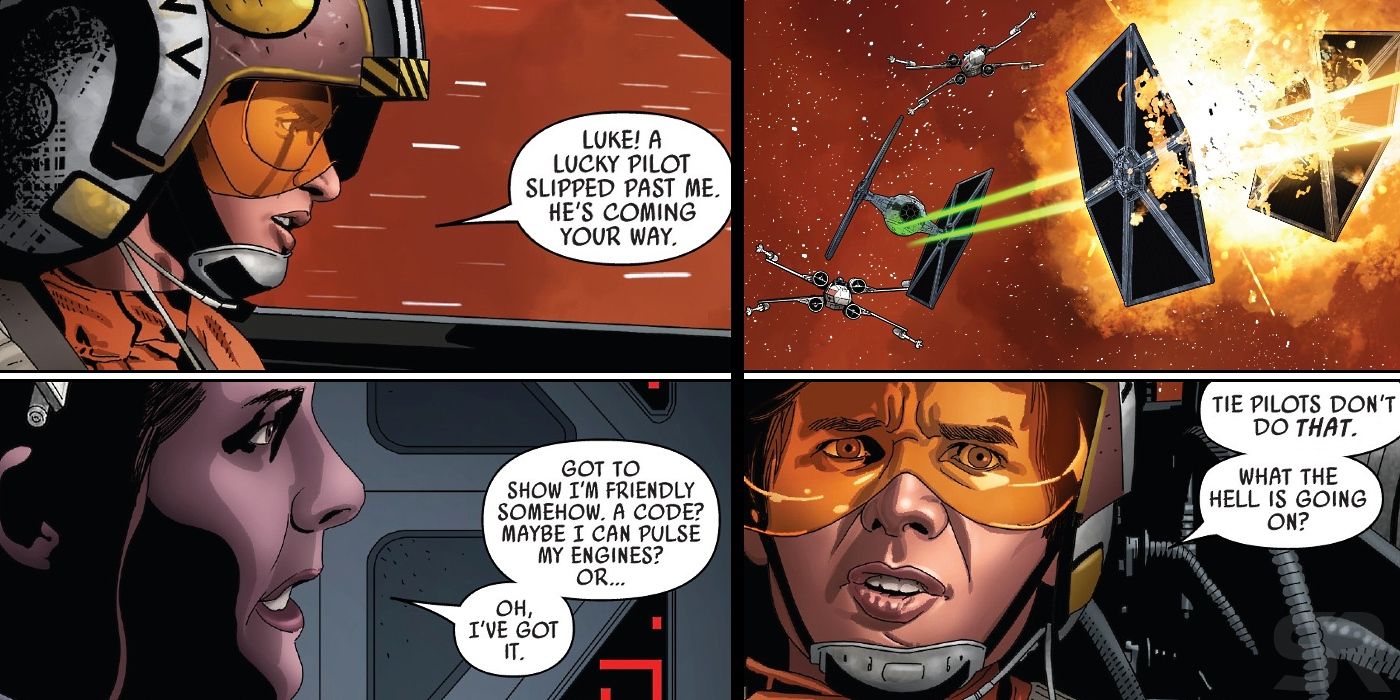 The fan service of the next sequence is just an appetizer to Han's own promotion within Rogue Squadron, as Han and Luke soon give chase to a TIE Fighter making a direct line towards a Rebel cruiser. Luckily The Force intervenes to keep Leia alive, as Luke senses that something is not quite right about this enemy fighter, just moments before blasting it to pieces. And when Leia decides the best way to show she really is a friendly is to blow another TIE Fighter into dust, the entire trio of Star Wars heroes make for safety in formation.

Neither are all that surprised to find Leia was their mystery ace pilot, and with the counter-code returned to the Rebel flagship, they quickly warp away to safety - leaving the rest of their fleet behind. Not a retreat, but a chance to devise a plan. One to safely spread the crew and counter-codes across the fleet, with Luke and Leia overseeing their safety from the transport ships. 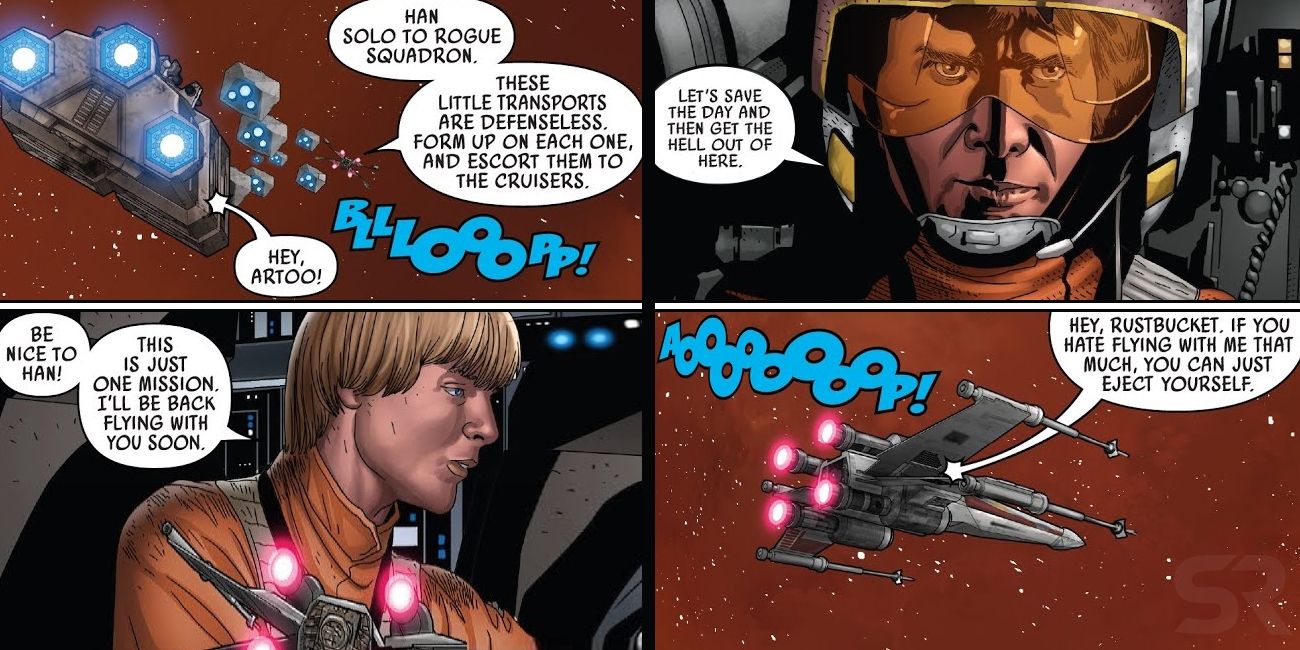 It's hard to say what Star Wars fans will enjoy more: the overall plan for swapping Han and Luke's usual roles, with Luke accompanying Leia in trying to avoid trouble and Han leading the fighting from the cockpit of his X-wing, or R2-D2's open disapproval of keeping the X-wing running for Han instead of Luke. But as Han orders the remaining pilots of Rogue Squadron to escort and defend the Rebel transports with their lives - before opening fire on his own TIE interlopers - it won't much matter.

Just so fans know exactly where this previously untold chapter of Han Solo's rise to prominence in the Rebellion is set, it takes place between Episodes 4 and 5. Previous issues of this Star Wars series showed the birth of Luke's Rogue Squadron in this very same battle, confirming that Luke named Rogue Squadron for Jyn Erso's team, since the same level of daring and bravery would be need for the Rebels to escape this ambush.

But no matter how young Rogue Squadron may be in this story, seeing Han Solo leading them in obliterating TIE Fighters and preserving the Rebellion's future is a dream come true. 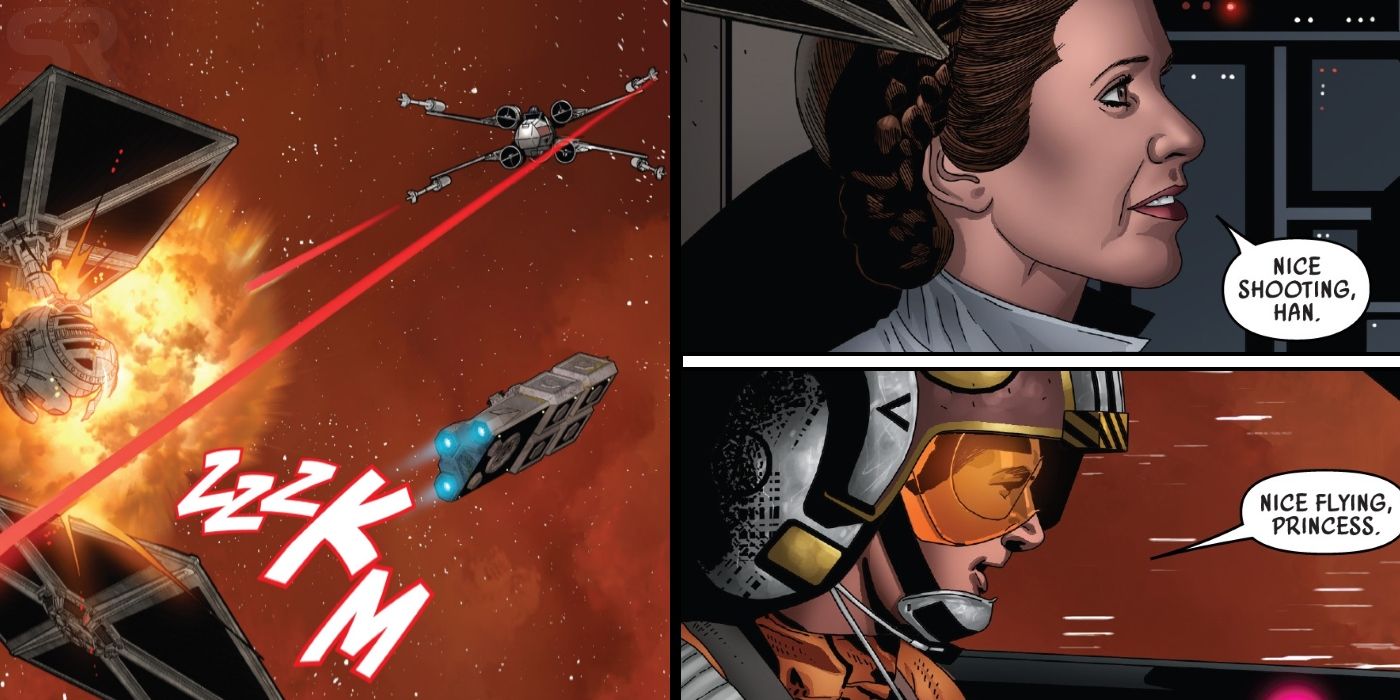 The story is more than just fan service and wish fulfillment, of course. The mission helps the bulk of the Rebel fleet escape, but it also demonstrates Han's continuing investment in the Rebellion, as Mon Mothma observes once they're all safely on board and evacuated. For their actions in defense and rescue of the fleet, all three of the heroes are promoted: Leia to General, Luke to Commander, and Han to Colonel. Predictably, it's only Han who opposes the promotion citing his tendency to avoid joining... well, any allegiance. But after witnessing his valiant defense of the Rebels (and his personal promise to ensure every one of the transports make it through safely), Mon Mothma knows Han is a leader whether he admits it or not.

The issue helps to fill in the gap between the first Star Wars film, ending with Han and Luke's medal ceremony, and the beginning of Empire, in which Han has entirely joined the Rebellion as a leader alongside Luke and Leia. But the smaller moments of this thrilling chapter in Han's life are the ones sure to last for fans. The final treat being the critical hit taken to Han's X-wing, leading him and R2 to accept their impending death and share at least one moment of respect, if not open appreciation that they should die at eachother's side.

And of course, finally seeing Han Solo first join, then lead Rogue Squadron in Luke's place. Confirming once and for all that he truly is one of the best pilots the galaxy has ever seen... in at least two different ships.

Look, we already know how great, amazing, blissful, etc. life in the Animal Crossing universe can be, especially when...
Read More

Halloween is here and while you may enjoy this holiday, you might not be as into scary horror games as others. You ar...
Read More
Back to News