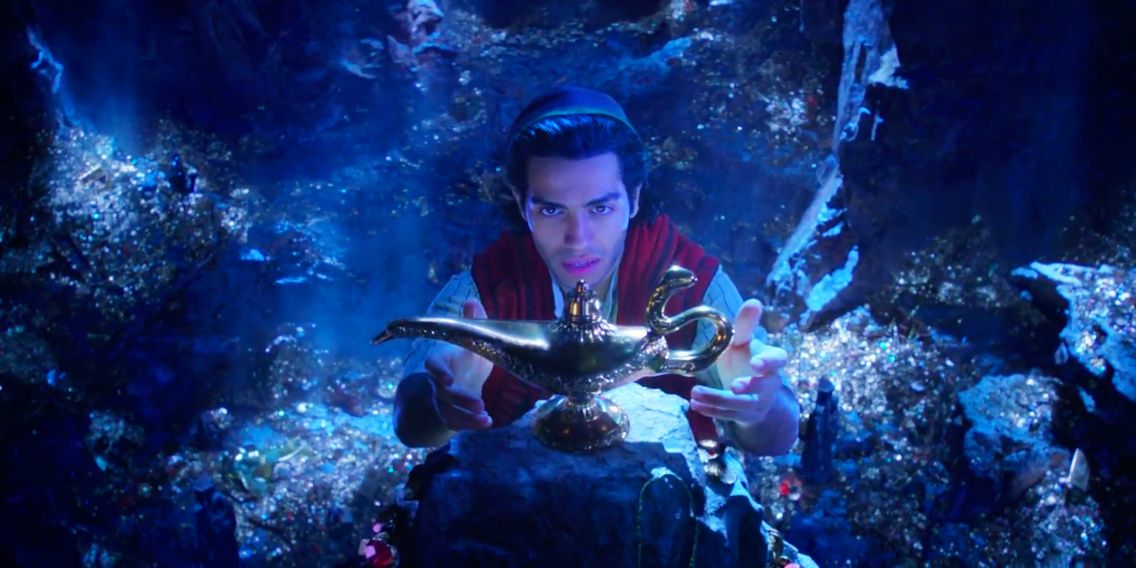 UPDATE: Read our full breakdown of the Aladdin trailer here.

Disney's Aladdin movie unveils a first look teaser trailer, offering fans of the animated classic their initial glimpse at the upcoming live-action retelling. Walt Disney Studios has truly leaned into the trend of adapting its animated classics to live-action, finding success with the likes of Cinderella, Beauty and the Beast and The Jungle Book. Even a movie like Maleficent, which offers a different take on the classic fairy tale, was successful enough to warrant a sequel. As such, Disney has a number of projects in various stages of production that will bring new life to the studio's animated features. In 2019, Disney will release a few of these projects, including a live-action retelling of Aladdin next spring.

The upcoming movie will be a new take on the Mouse House's 1992 animated feature of the same name, but will still be a musical, and include new songs written by Benj Pasek and Justin Paul (The Greatest Showman). Disney recently kicked off the promotion for Aladdin by debuting a teaser poster. Aladdin star Will Smith, who will play Genie, revealed the one-sheet featuring the genie's lamp, and teased that he couldn't wait for fans to get their first real look at the movie. Well, fans don't have to wait any longer.

Next: All The Live-Action Disney Remakes In Development

Disney released the first teaser trailer for Aladdin, the upcoming live-action retelling directed by Guy Ritchie from a script he co-wrote with John August and Vanessa Taylor. In addition to Smith, the movie stars Mena Massoud as the titular "street rat," Naomi Scott as Princess Jasmine, Marwan Kenzari as Jafar, Nasim Pedrad as Jasmine's friend and handmaid Dalia and Billy Magnussen as a new character. Watch the Aladdin trailer below.

The Aladdin trailer doesn't reveal too much from the upcoming live-action retelling, but that's to be expected for an initial teaser. Still, the video does confirm quite a bit in terms of how closely it will stick to the story of the animated movie. Iago, Jafar's parrot, makes an appearance in the Aladdin teaser trailer as the camera follows the bird through Agrabah - the fictional city in which the film takes place. Further, the scene in which Jafar employs Aladdin to enter the secret cave in order to retrieve the genie lamp also feels ripped directly from the animated version, from the glowing eyes of the cave guardian to the piles of treasure located inside. The teaser ends on our first glimpse at Massoud as Aladdin.

Unfortunately, there's plenty that the Aladdin teaser trailer doesn't show as well. Besides Massoud's Aladdin, the video doesn't offer any good looks at Smith's Genie or Scott's Jasmine - two fan-favorite characters from the animated feature. And though Kenzari's Jafar is present, he's obscured in shadow. In the case of the Genie, it may be that whatever CGI - if any - is being used to bring the magical being to life isn't ready yet. The movie doesn't hit theaters until May 2019, after all, so Ritchie is no doubt still hard at work on post-production. While fans were likely eager to see Genie and Jasmine, they'll have to wait until the next trailer, or a first look photo. For now, this initial Aladdin teaser trailer should please fans of the original animated version with how close it sticks to the 1992 and tide them over until more footage from the live-action retelling is released.

Next: Aladdin's Whitewashing Could Seriously Damage Its Box Office Potential

I started a new World of Warcraft character last week, following the release of the Shadowlands expansion pre-patch t...
Read More
Back to News