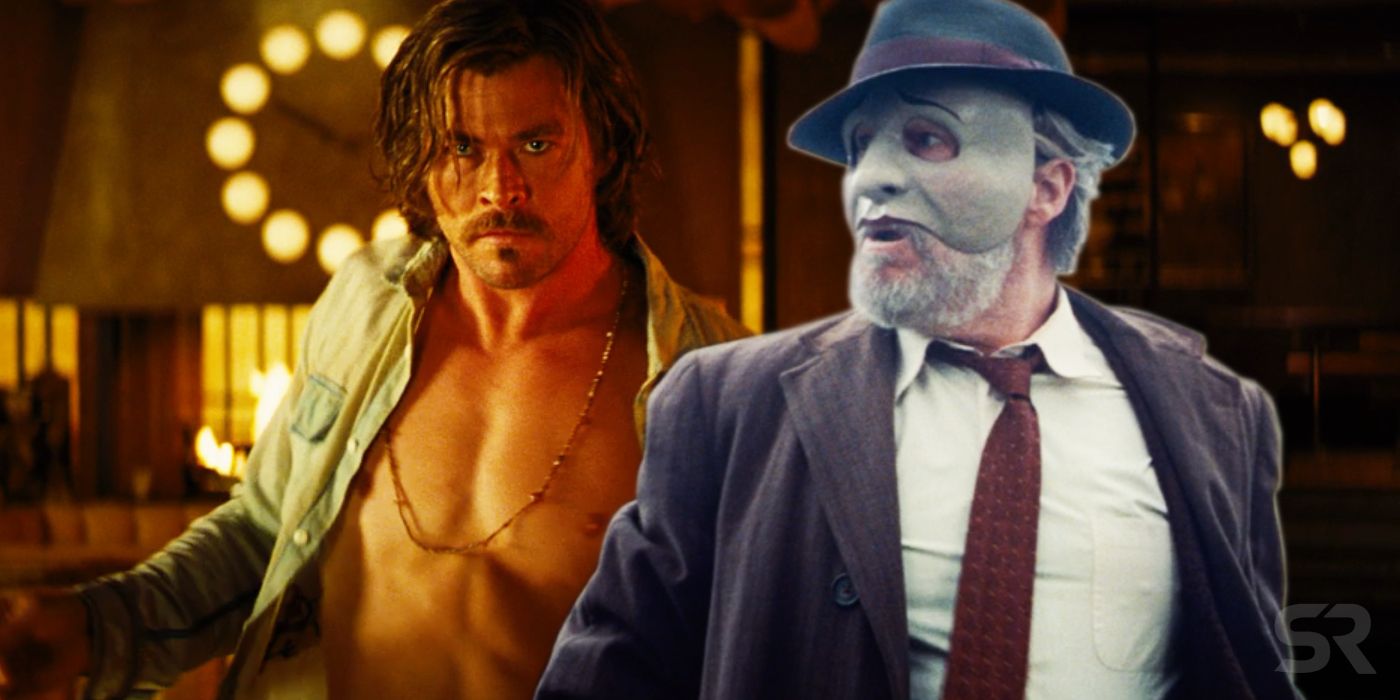 What exactly happens at the end of Bad Times At The El Royale, and what does it all mean? Needless to say, Drew Goddard's ensemble mystery is filled to the brim with big twists. His second directorial effort sees the filmmaker really flex his muscles for creating a suspenseful, nuanced story that truly puts his characters through the wringer. Not that anyone should be surprised at that, after all this is the same guy behind Cabin In The Woods, a teen slasher that morphs into an apocalyptic nightmare on which he shared writing credits with Joss Whedon.

But Bad Times At The El Royale is a different animal to Cabin, even with some overlap in technique and execution. The film's reliance on theme over plot and more offbeat structure make it very distinct. Goddard channels a range of influences from the Coen brothers and Quentin Tarantino to gospel music to create the stylish period piece.

It's all a bit complicated, with carefully threaded ideas and purposely unanswered questions. Here's a breakdown of the Bad Times At The El Royale ending, and some of the major narrative ideas that hoist it all up.

What Happens In Bad Times At The El Royale's Ending? 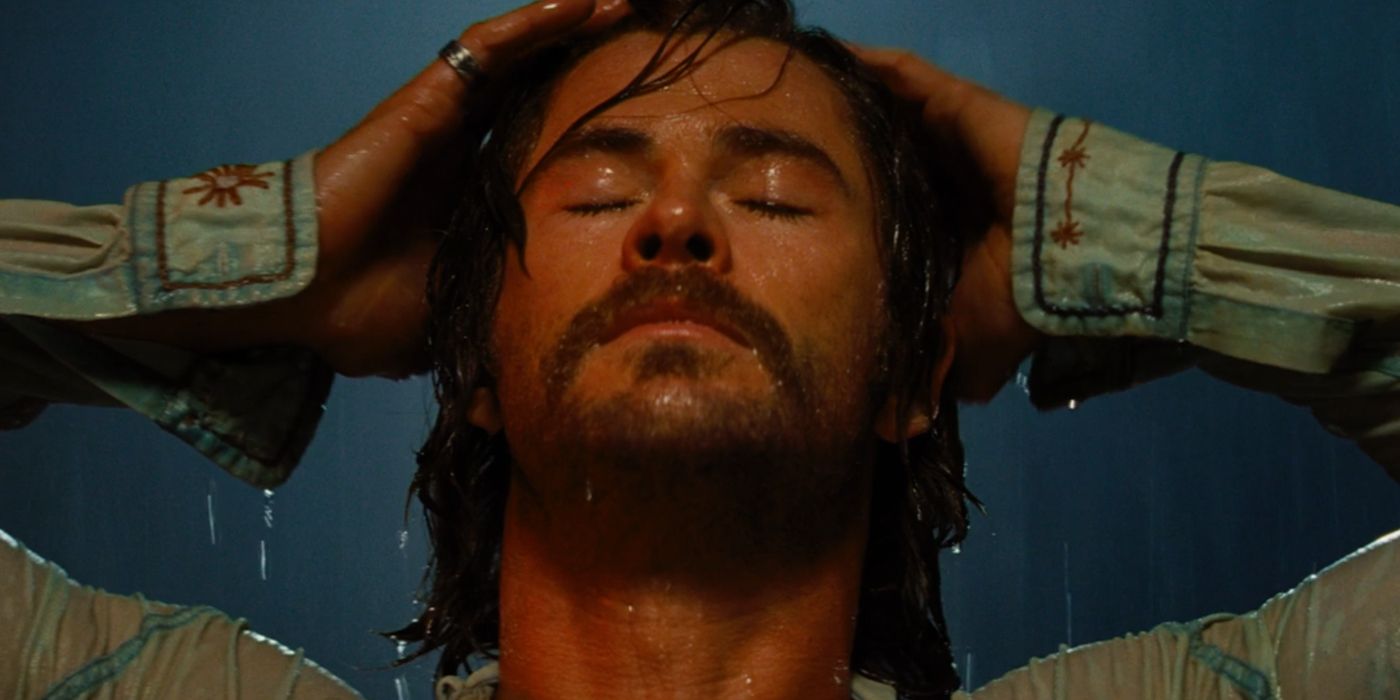 In the chaotic final act, all but two of the characters are dead after Billy Lees (Chris Hemsworth) and his cult cronies invade the hotel. A criss-cross of shootings and stabbings leave a slew of bodies behind as a fire engulfs the once-thriving tourist locale.

Billy was given the heads up about the hotel and the bag of stolen money hidden there by Rose Summerspring (Cailee Spaeny), a teenage girl whose big sister Emily (Dakota Johnson) had kidnapped her away from Lees' cult. Lees was rounding up impressionable young men and women and turning them into his violent servants through the promise of freeing them from the chains of society. Unfortunately for the other patrons of the El Royale that night, Billy's arrival meant nothing but trouble as he ties them all up and starts to play sadistic games using the hotel's casino as way to torture them for information on the bag of money.

But the people Billy is dealing with aren't as easily manipulated as Rose was, and their resistance to his charisma and sociopathy gradually causes things to bubble up into a messy confrontation. First Emily is killed, then Darlene Sweet (Cynthia Erivo) inspires Miles (Lewis Pullman), the hotel's concierge, to snap out of his nervous breakdown and pick up a gun and help them. Miles, as it turns out, is a Vietnamese war veteran who dispatches Lees' henchmen while Father Flynn (Jeff Bridges) fights Billy. The two eventually converge, Miles killing Billy before Emily, in a rage, fatally stabs Miles and is shot by Flynn.

Darlene and Flynn tend to a bleeding out Miles, who begs for forgiveness for everything he did while at war, right on the Nevada-California state-line that runs through the middle of the building. Flynn, despite not being a real priest, blesses Miles and forgives him his trespasses right before he dies. Flynn and Darlene grab the money, throw the mysterious tape into a fire and leave to let the place burn. One final shot sees Flynn attend Darlene's gig the next day.

Who Was On The Tape? 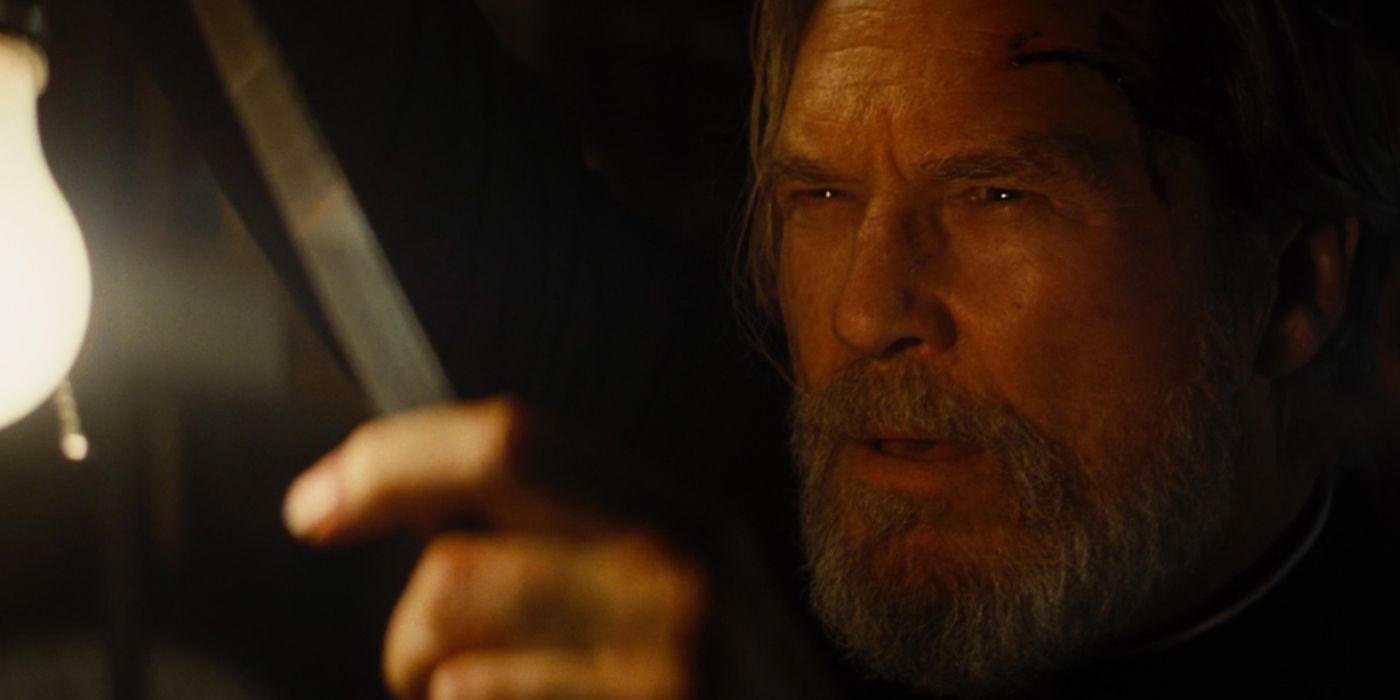 This is a question that permeates Bad Times At The El Royale without ever becoming a central focus: who is on the tape? The people who own the El Royale had been spying on people in the rooms with the footage being mailed to them by Miles. This, the last remaining reel, had captured a particularly famous person who visited the hotel in the recent past and has since died, committing what we can assume was adultery or something similarly damaging to a person's reputation.

One of the most obvious candidates is Robert F. Kennedy, one of the Kennedy siblings who served prominently in public office throughout the '50s and '60s. He was known enough that everyone recognizing him makes sense, and died in 1968, two years before Bad Times At The El Royale is set (Nixon's speech places it on October 7, 1970), which matches the vague description of the guest.

But it's the lack of answer that's important, because the tape symbolizes both the “other life” anonymity of the hotel and the cleansing of past sins from the events of the film.

What Does The Final Scene Of Bad Times At The El Royale Mean? 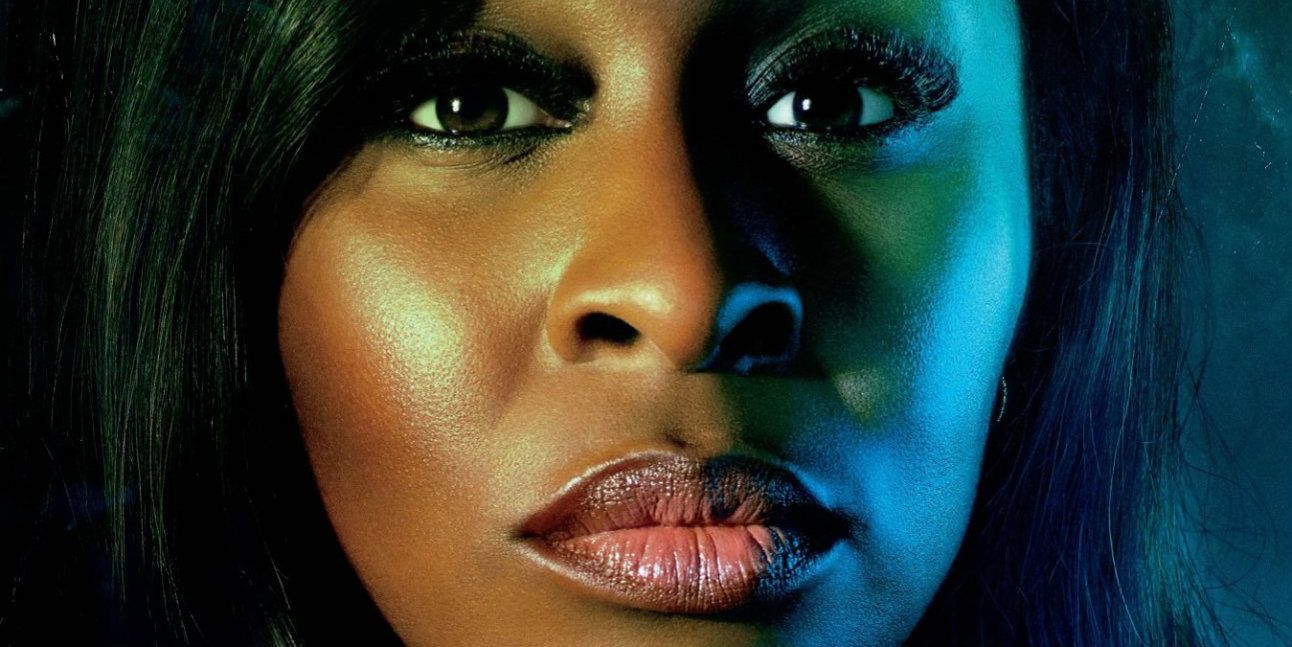 In a very Coens-esque touch, the last image of Bad Times At The El Royale is Darlene, the film's only completely virtuous character, taking the stage for her Reno performance, being watched by the newly reborn Flynn. They are the only two who escape death, and in doing so survive the fiery judgment of the previous night. Recurring imagery paints Lees as a devil figure, and the flames his presence create certainly support that notion. Darlene and Flynn couldn't be tempted by his advances and rejected him, and in doing so earned safe passage away to escape.

The last scene acts as an epilogue that brings the heavily thematic ending back around to character and plot, coming full circle to the first two of the arriving El Royale visitors we meet in the movie.

Page 2 of 2: The Real Meaning Of Bad Times At The El Royale's Ending

Bad Times At The El Royale Is Really About Morality

There's a great Christian religiosity to Bad Times At The El Royale. Miles' one motivation is to have his sins forgiven by a man of God, whom he believes to be Father Flynn, and Lees is portrayed as an anti-Christ, bringing evil wherever he goes.

The movie approaches morality in a couple of ways - first that life has a way of punishing us for our crimes, and second that the realest evil walks among us, waiting to take advantage of our weakest moments. Flynn, in the throes of dementia, has been made to pay enough that the story allows him to have his money so he can become a new man. Emily and Rose, on the other hand, find only death at the end of a long road paved by male abusers, first their father, then Billy. Darlene, too, has had her singing career stifled by condescending music producers, and Miles is distraught with the things his bosses have forced him to do, both as a soldier and later as an employee of the hotel.

An idiom of the film is that moving on from being a bad person requires a sacrifice, and that we should always be wary of men in places of power. The patriarchy is something that actively oppresses whomever it chooses, and does so in often subversive ways, like offering salvation. The victims of these men, if they escape with their lives, find themselves without much a life at all, still caught in the gears of societal constructs that value only the powerful.

Vietnam's Importance In Bad Times At The El Royale 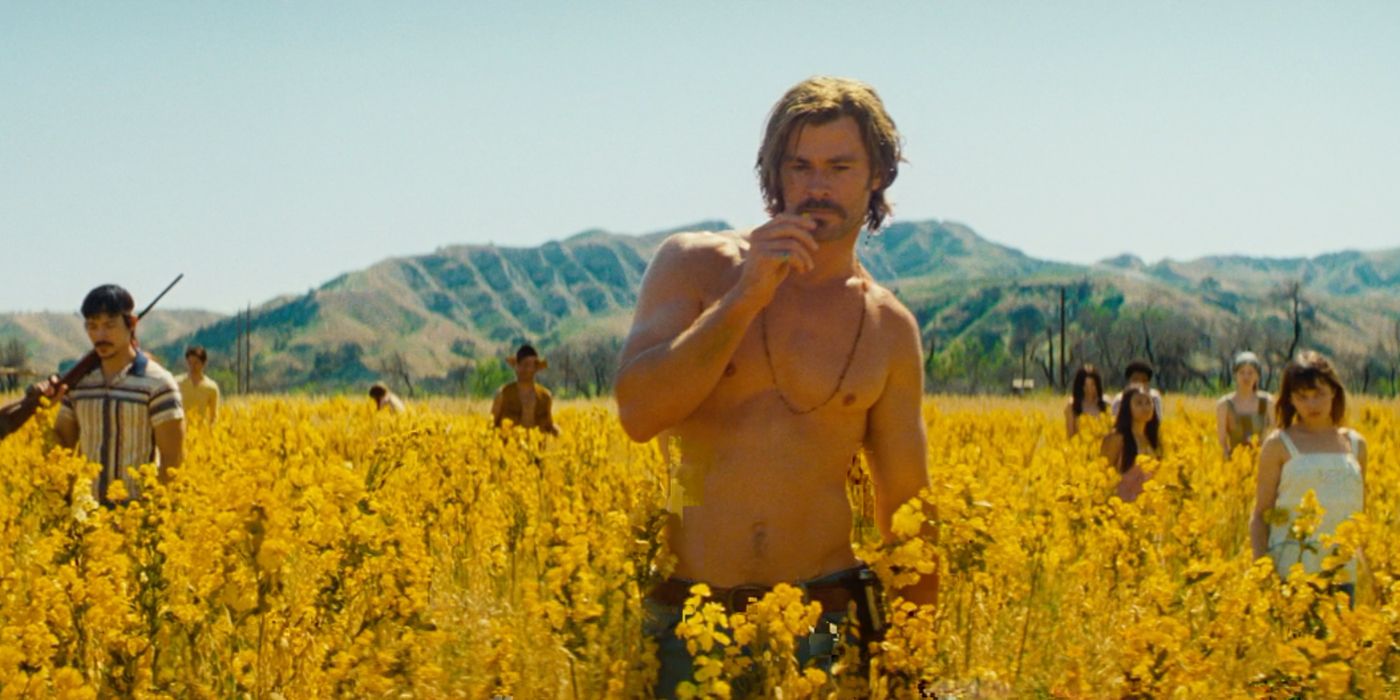 The Vietnam war is referenced indirectly throughout Bad Times At The El Royale via newscast, foreshadowing the reveal of Miles' time as a soldier in the conflict. There's a seething anger towards the war underneath the film's narrative elements and imagery. Part of Billy Lees' introduction is him leading a group through a field of waist-high crop, invoking similar images from Stanley Kubrick's Full Metal Jacket and Oliver Stone's Platoon, drawing a line between he and the numerous American presidents and public figures that supported US military involvement.

The damage intervention in the Asian war inflicted on American soldiers is pointedly used for Miles' arc as he goes from timid, drug-addicted concierge to efficient killer before having a complete emotional breakdown before death. He was a great soldier, but serving made it so he didn't really have a chance at anything else. Billy's cult, then, serves as a stark invocation of the indirect ways Vietnam harmed America.

Billy is an obvious riff on Charles Manson and the Manson Family - a group of people, mostly young women, who lived with Manson on a desert commune, looking to live an alternative lifestyle. Manson was a troubled individual his entire life, but his ideas of psychedelia and escapism were made incredibly enticing to the young people of the anti-Vietnam counter-culture that became widespread in the '60s. Figures like Manson and Lees took advantage of a political climate that made a lot of people very scared about their future and the future of America and what the country was becoming.

Bad Times At The El Royale doesn't lay blame for Billy entirely on 'Nam. Instead, in keeping with the very Coens-meets-Tarantino style of the overall picture, Chris Hemsworth portrays him as the exaggerated, drugged-up bully he is, many of his scenes layered in black comedy. But that this is the way Goddard chose to include the summer of love and hippie culture of the time feels like an unsubtle nod to the wider effects of America's invasion of Vietnam.

The Real Meaning Of Bad Times At The El Royale's Ending 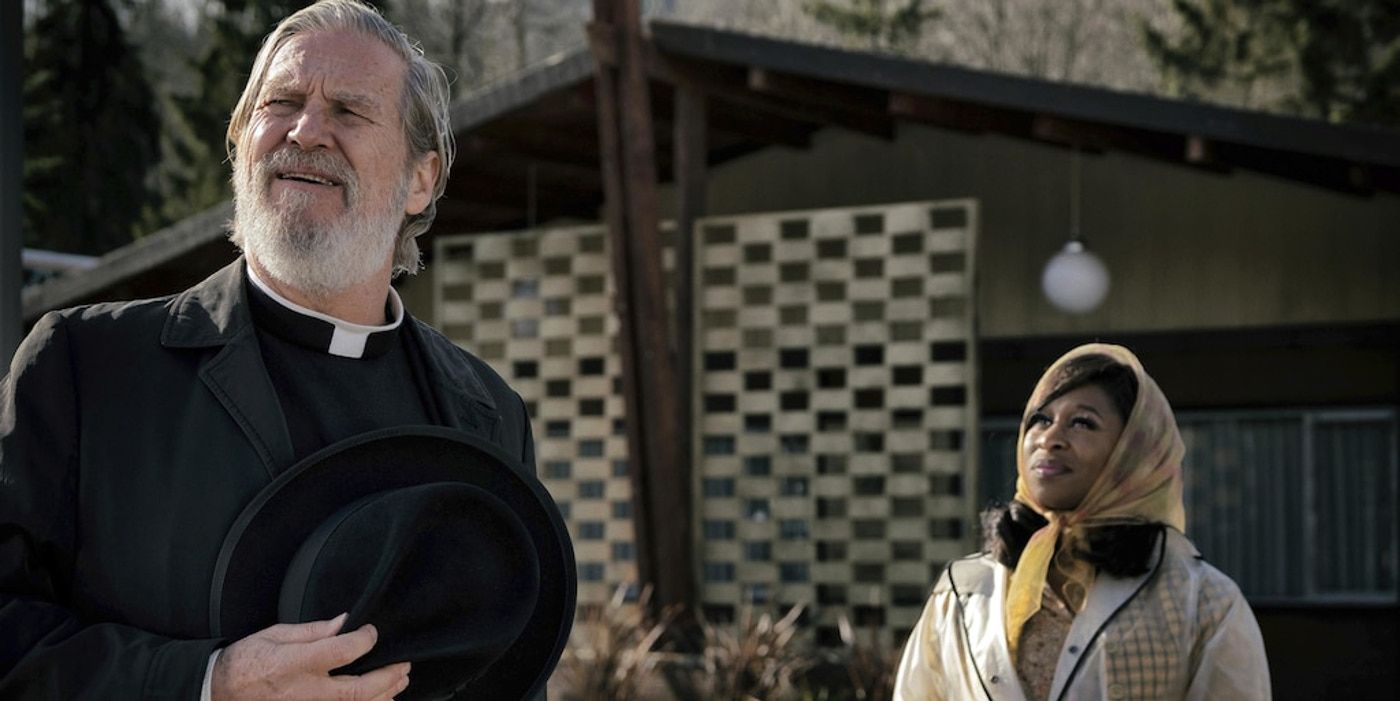 Everything in Bad Times At The El Royale exists in a gray area except two people: Darlene and Billy Lees, light and dark respectively. Indeed, she's the one who puts him in his place, too. By following her dreams despite having had her career stepped on by greasy producers, Darlene eventually finds her break, and a nice friend along the way. Billy uses the vulnerable to give himself a power trip before getting his comeuppance.

Bad Times At The El Royale offers a couple of simple takeaways – hold onto your dreams as hard as you can, because so much of this world is out to destroy them, and if some bad people have made you do some bad things, it's okay, you are forgiven, because we all know who the real bad guys are.

Have You Ever Lost An Important Saved Game?

It’s Monday and time for Ask Kotaku, the weekly feature in which Kotaku-ites deliberate on a single burning question....
Read More
Back to News