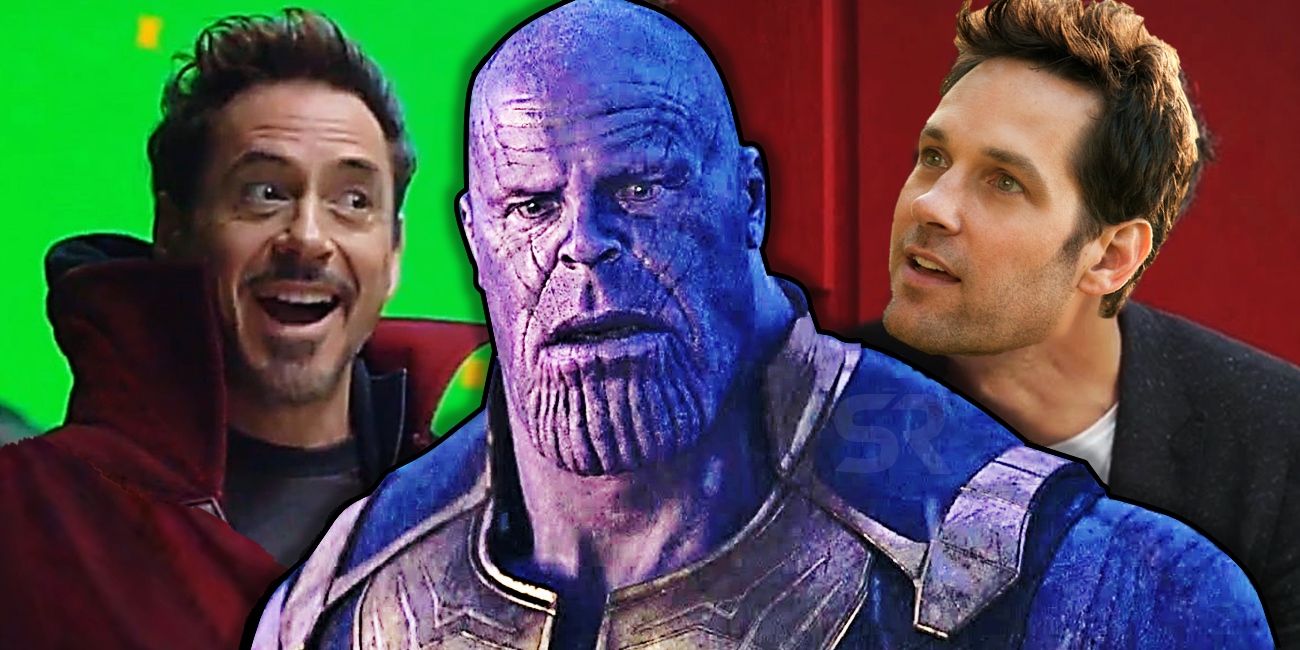 It's generally believed that Avengers 4 is a time-travel film, but could Earth's Mightiest Heroes actually be using BARF technology to defeat Thanos instead?

Next year's MCU slate is possibly the most exciting since the entire franchise launched in 2008. Things will kick off in March with the release of Captain Marvel, the MCU's first female-led solo film; then, only a couple of months later, we'll finally see how the Avengers defeat Thanos. Avengers: Infinity War's cliffhanger ending saw the Mad Titan succeed in his insane goal to erase half the life in the universe with just a snap of his fingers. How can the Avengers avert or undo this monstrous act of galactic genocide?

So far, the most common theory is that the Avengers will use time-travel. But an alternate theory is gaining traction among some fans; that they use Tony Stark's B.A.R.F. technology instead. Here, we're going to critically assess this latest idea, and see if it really can compete with the time-travel concept.

Avengers 4's Best Theory is Time-Travel - Or Is It? 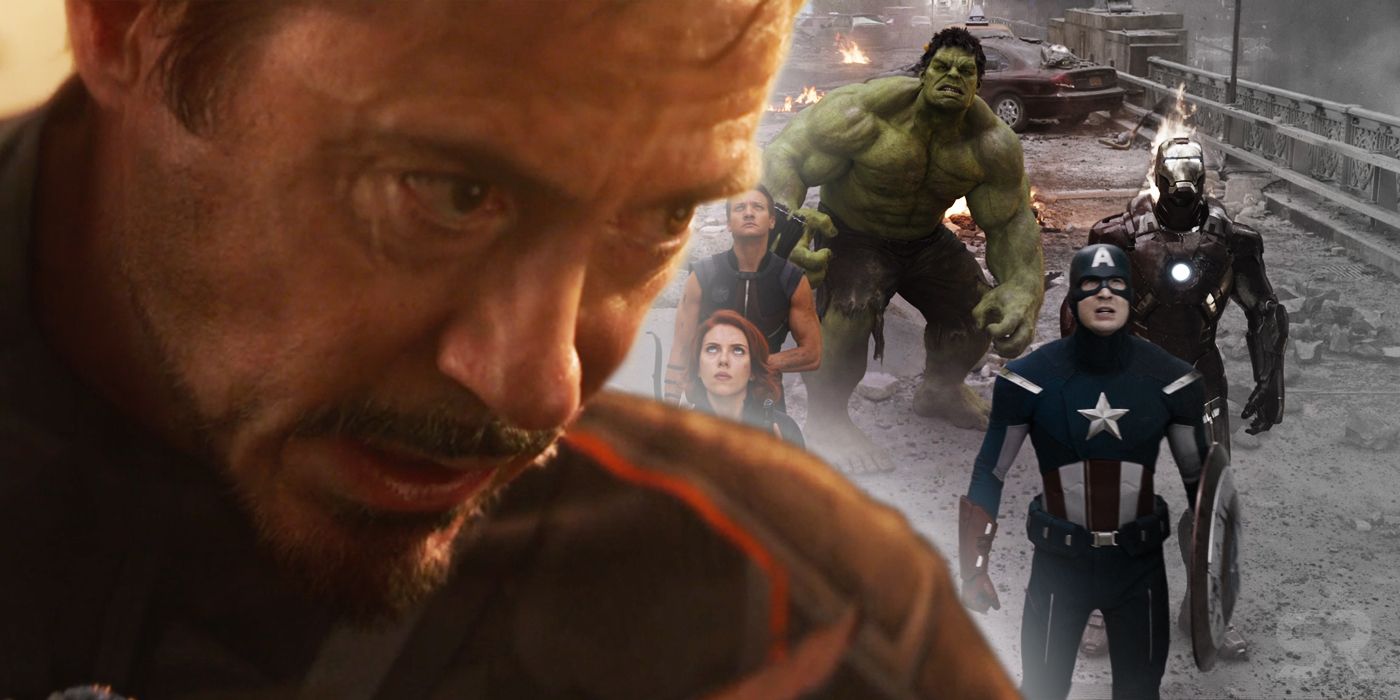 There's abundant evidence that Avengers 4 could involve some element of time-travel. Set photos showed characters suited up in classic versions of their costumes, most commonly in outfits they wore back during the Battle of New York in The Avengers. Tony Stark was shown wearing the same Black Sabbath shirt he wore for most of that film; significantly, his face was bruised, implying the scene is immediately after the heroes drove back the Chitauri. Thor and Loki were glimpsed in their Avengers-era costumes, with the God of Thunder's hair back to its traditional golden locks. A final batch of set photos showed Captain America wearing that "old-fashioned" uniform; curiously, though, he was standing next to an older Tony Stark, as well as Scott Lang's Ant-Man.

There have been subtle hints that Avengers 4 could revisit the events of other movies, too. In September 2017, a number of Marvel actors - including Zoe Saldana and Karen Gillen - supported a charity campaign for victims of Hurricane Harley. They shot a brief video promoting the campaign, and significantly were wearing their costumes from 2014's Guardians of the Galaxy. Meanwhile, set photos from Durham Cathedral suggested it would be doubling up as Asgard, which seems to support the idea of time-travel, since Asgard, of course, was destroyed in Thor: Ragnarok. Finally, there have been constant rumors that Frank Grillo will be reprising the role of Crossbones, which is significant given his villain was killed off in Captain America: Civil War.

With the possibility of time-travel on the cards, attention focused on the mechanism. The most likely is the Quantum Realm, a plane of reality outside the normal laws of time and space, and concept art for Ant-Man & the Wasp teased that Marvel considered unveiling a so-called "Memory Palace" inside the Quantum Realm; by accessing this, you could change the past. Although that idea didn't make it through until the final film, the post-credits scene of Ant-Man & the Wasp nevertheless revealed that there are "time vortexes" inside the Quantum Realm. It's generally believed that Ant-Man will escape the Quantum Realm through a time vortex, and emerge five years into the future, where he learns of the horrors that have befallen the Earth. That would explain why Marvel cast Emma Fuhrmann as an older Cassie Lang for Avengers 4. Scott presumably makes his way to the Avengers, and Tony Stark comes up with the idea of using the Quantum Realm to rewrite history - perhaps by collecting the Infinity Stones in the past. The theory makes sense, and it draws so many potential plot threads together. But is there another possibility?

Related: MCU Movies That Avengers 4 May Revisit Via Time-Travel

Are The Time-Travel Sequences B.A.R.F.?

There's still one major loose plot thread; BARF. Captain America: Civil War introduced viewers to one of Tony Stark's newest inventions, a virtual reality tool he intended to use to help people deal with past traumas. Stark gave it an amusing name; "Binarily Augmented Retro-Framing, or B.A.R.F... An extremely costly method of hijacking the hippo-campus to clear traumatic memories." Set photos from Avengers 4 showed boxes on-set carrying labels for "B.A.R.F.." Commenting on these photos, Avengers 4 co-director Joe Russo admitted they may be important. "Certainly, there is a five-minute sequence in Civil War around a piece of technology that was laid in for a very specific reason," he observed. "If you go back and look at that film, you may get a hint as to the direction."

There's no obvious reason B.A.R.F. could be connected to time-travel. But this technology does allow people to explore their own memories, and that in itself could provide an explanation for why we're revisiting so many past events; are the Avengers using B.A.R.F. to probe the past, exploring key moments in history that involved the Infinity Stones in order to somehow defeat Thanos?

Over on Reddit, one recent poster claimed to be part of the ongoing Avengers 4 reshoots. According to themiddledude, Ant-Man will be tasked to steal the Reality Stone from Thanos. Somehow, he claims, Iron Man and Captain Marvel combine the Reality Stone with B.A.R.F. technology to rewrite reality. It's not exactly clear, and this is just a random Reddit thread and so shouldn't be given any more validity than a fan theory, but needless to say, it is a fascinating theory. Perhaps the Avengers don't travel in time at all; instead, they use B.A.R.F. to do something vaguely similar.

Page 2 of 2: Does This Theory Make Sense? 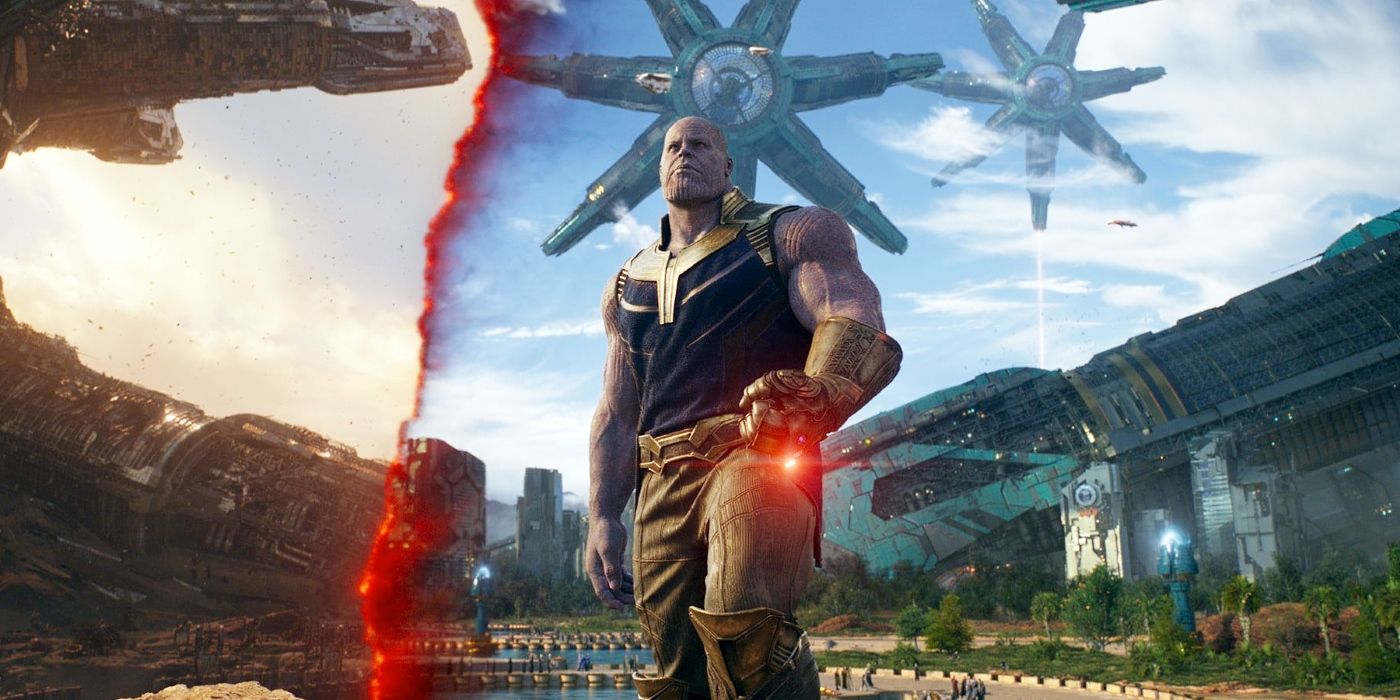 What Are The Avengers Really Trying To Do?

But this is where the theory hits something of a problem; what are the Avengers actually trying to accomplish by combining B.A.R.F. and the Reality Stone? How could that conceivably put right what Thanos has done, on a universal scale? We already know from Avengers: Infinity War that the Reality Stone's power is quite limited. It's power can be used to rewrite reality across an entire star-system; we know that, given the Guardians didn't perceive Knowhere as battle-damaged and ravaged upon their approach. But the moment Thanos headed back to Titan, the Reality Stone's effects were canceled out. That means there is some sort of geographical limitation to the Reality Stone's effects; it also means that they're temporary, and that reality moves back to the default when the Stone is out of range. It's true that cosmic events such as the Convergence can boost the Reality Stone's power, but these are very rare, and one isn't due for another 5,000 years.

It's possible the Avengers are trying to create a reality in which they are the ones to possess the Infinity Stones. Thus they combine B.A.R.F. and the Reality Stone to recreate the aftermath of the Battle of New York, in order to take possession of the Space Stone and the Mind Stone; likewise, they recreate a scene from Guardians of the Galaxy in order to get their hands on the Power Stone. Thus armed with duplicate Infinity Stones, they could potentially oppose Thanos, who still wields his own Infinity Gauntlet.

There are two major advantages to this theory. The first is that it keeps time-travel to a minimum; it's still used for Ant-Man (and probably for Captain Marvel, as well), but other than that we don't get into the complexities of temporal mechanics. That would indeed be a smart move on Marvel's part, as superhero franchises don't have a particularly strong record of making sense of time-travel. Meanwhile, it also neatly explains how Thanos learns what the Avengers are doing and heads to stop them; he presumably realizes that the Reality Stone has been stolen, and guesses that his plans have been threatened (perhaps even by using the Time Stone to examine the future). 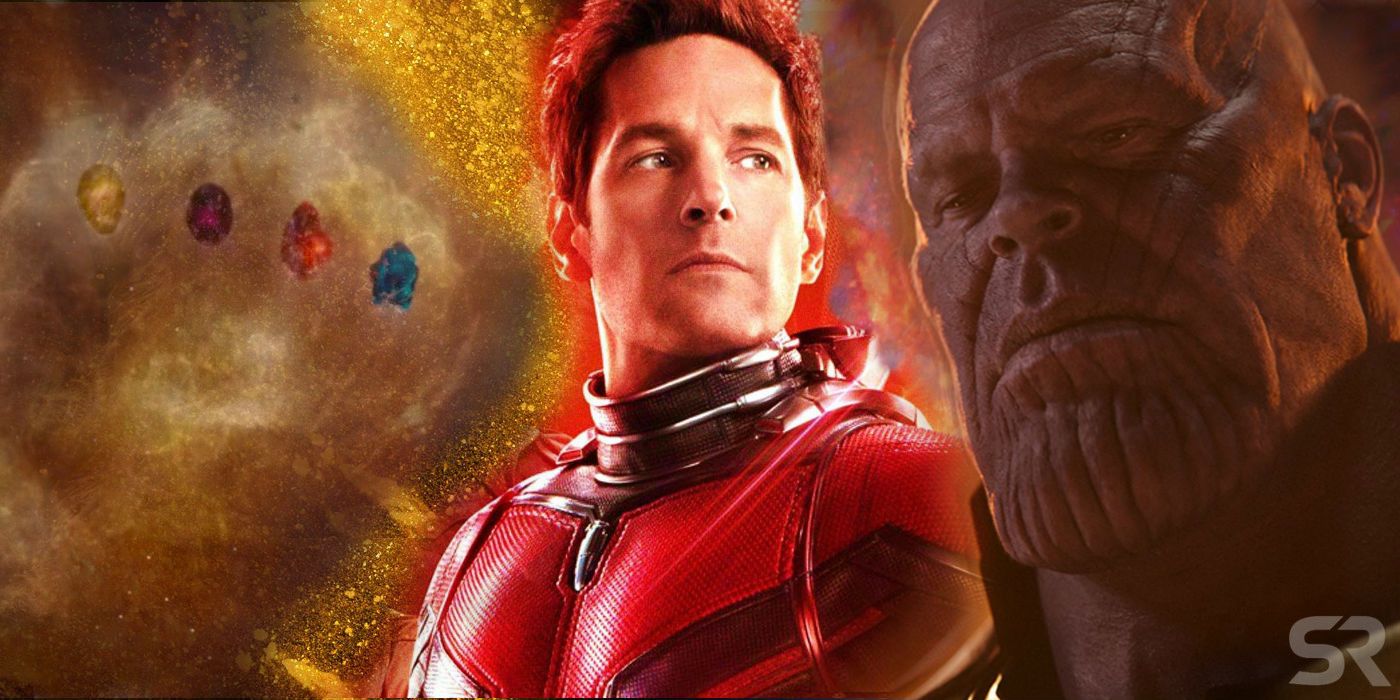 The fundamental problem with the B.A.R.F. theory, though, is that it depends upon bringing too many concepts into play at once. Avengers 4 will still most likely include time-travel to bring Ant-Man (and possibly even Captain Marvel) into the mix, and that means the time-travel genie is already out of the bottle. In logical terms, there's a pretty straight line between Ant-Man's arrival and the idea of rewriting history; whereas it's pretty difficult to track how Stark jumps from Ant-Man to a plan involving the Reality Stone. Meanwhile, the entire plot is predicated on the assumption the Avengers know both where Thanos is, and where he's put the Infinity Gauntlet. Given Thanos wasn't wearing it when he settled down to watch the sunset, that seems doubtful; it's quite possible Thanos hid it in order to ensure the snap couldn't be undone. The time-travel theory simply makes a lot more sense.

Related: Avengers 4 Isn't Going To Be The MCU's Secret Invasion

But how does that account for the presence of B.A.R.F. in Avengers 4? It's difficult to say, but one possibility is that time-travel within the Quantum Realm does really involve memories. Certainly that's the direction Marvel was considering in concept art for Ant-Man & the Wasp's "Memory Palace." If that's the case, it's not inconceivable that the Avengers would use B.A.R.F. to help isolate specific memories in order to help get back to the right time.

Perhaps the most interesting aspect of this Avengers 4 theory is that, however clunky it may be in some parts, it does correspond with most of what we know about the film so far. Given that's the case, this theory should serve as a caution to viewers who think they've sussed Marvel out; the House of Ideas could well play quite a few curveballs yet.

Disco Elysium, one of the games of 2019, is available on most modern platforms, like the PC, Switch, PS4 and Xbox One...
Read More