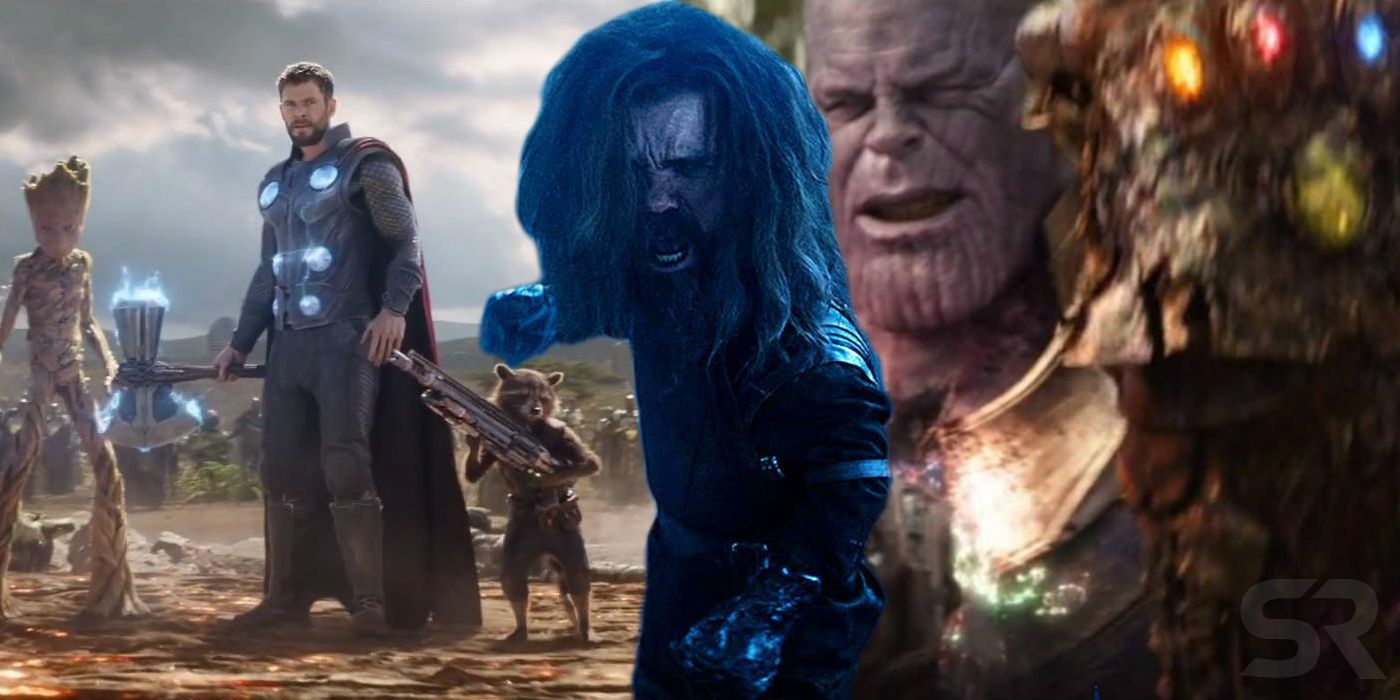 The surviving heroes are going to need some help to defeat Thanos in Avengers 4. Most are expecting characters such as Iron Man, Captain Marvel, or Ant-Man to play pivotal parts in taking down the Mad Titan. And while they're sure to be significant factors in the final battle, Peter Dinklage's Eitri could return for major and influential role as well.

It was reported in early 2017 that the Game of Thrones star was looking to join the MCU, and the potential of him joining sparked speculation over who he could be. The possibility of Dinklage portraying MODOK tantalized many, but the fan-favorite choice was that he'd be Eitri the Dwarf. He's the king of the Nidavellir inhabitants and capable of crafting powerful weapons, such as Thor's mighty hammer Mjolnir. After several months of speculation, it was finally confirmed when Avengers: Infinity War hit theaters that this is who Dinklage is playing in the MCU.

While his appearance in Infinity War was expected, when he was originally circling the role of Eitri, it was reported that he'd be appearing in both Avengers movies. This would indicate that Eitri is a survivor of Thanos' snap that wiped out half of the universe's population. But what role could he really have now? Well, it may just be that Eitri could be the key to determining who will win the final bout.

Why is Eitri important in the MCU? 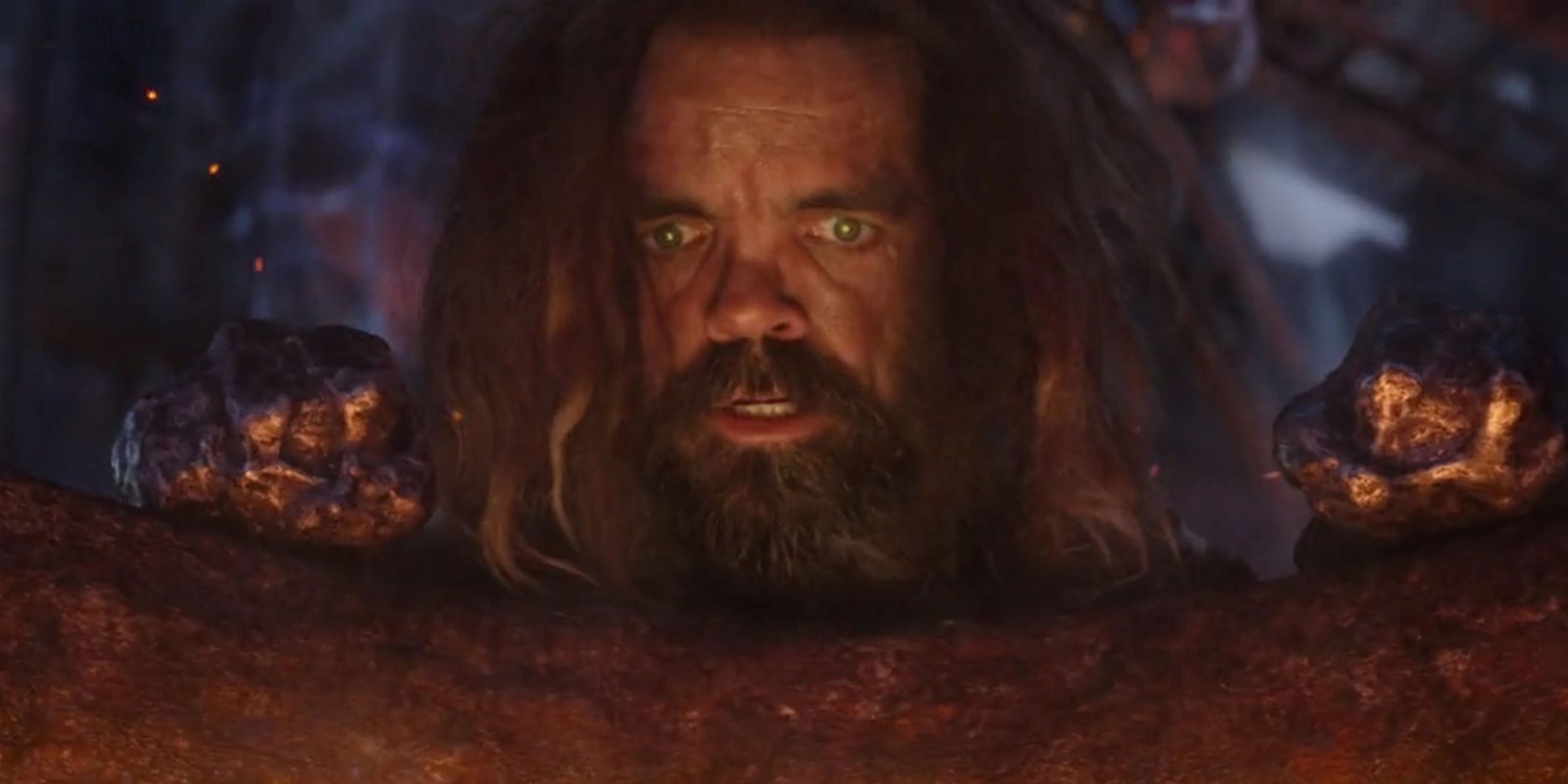 As mentioned, Eitri has only been seen in Avengers: Infinity War. His role in the movie was limited, but he proved to a key figure in that film. Once the Guardians of the Galaxy rescued Thor, he decided to go to Nidavellir to find a new weapon that could help him kill Thanos. After all, his beloved hammer Mjolnir had only just recently been destroyed by his sister Hela in Thor: Ragnarok. Thor is joined by Rocket and Groot on this adventure, to go to a place Rocket says creates "the most powerful, horrific weapons to ever torment the universe." But, the god of thunder is surprised to find the star at the center of Nidavellir has died and the rings around it are frozen when they arrive.

Related: Everything In The MCU Set AFTER Thanos' Snap

This happened after Thanos visited the location at an undisclosed time before the events of Infinity War. Thanos had gone to Nidavellir and met Eitri, demanding the creation of his Infinity Gauntlet. Eitri abided to Thanos' wishes out of fear that the other 300 dwarves who lived on Nidavellir would be harmed otherwise. After completing the forge of the Infinity Gauntlet, Thanos ruthlessly killed the remaining dwarves, leaving Eitri as the last one alive at this location. Despite letting Eitri live, Thanos still ruined his crafty hands by solidifying their state.

Eitri isn't just responsible for creating the Gauntlet, though. It's likely he also had a hand in creating Mjolnir. We already know Thor's favorite hammer was created in Nidavellir at the request of Odin and used the same Uru metal. That would explain Thor's knowledge of Nidavellir, although there's no specific mention of Eitri; However, he is largely responsible for the creation of Thor's new weapon, Stormbreaker. Thor was able to restart the forge by awakening the heart of the dying star at Nidavellir's core. The mechanism couldn't withstand the force, shutting the iris completely, but Thor was able to use his Asgardian might to manually open the iris to heat the Uru metal and create Stormbreaker. Eitri's latest creation proved to live up to its name for the most part, as Stormbreaker's power was put on full display in Infinity War. If Thor had simply aimed for the head, Thanos wouldn't have won and Thor would've successfully used the "Thanos killing kind" of weapon. Instead, they'll have to try again in Avengers 4, and making another trip to Nidavellir to get more of Eitri's creations could be the key to victory.

Page 2: How Eitri Fits Into Avengers 4 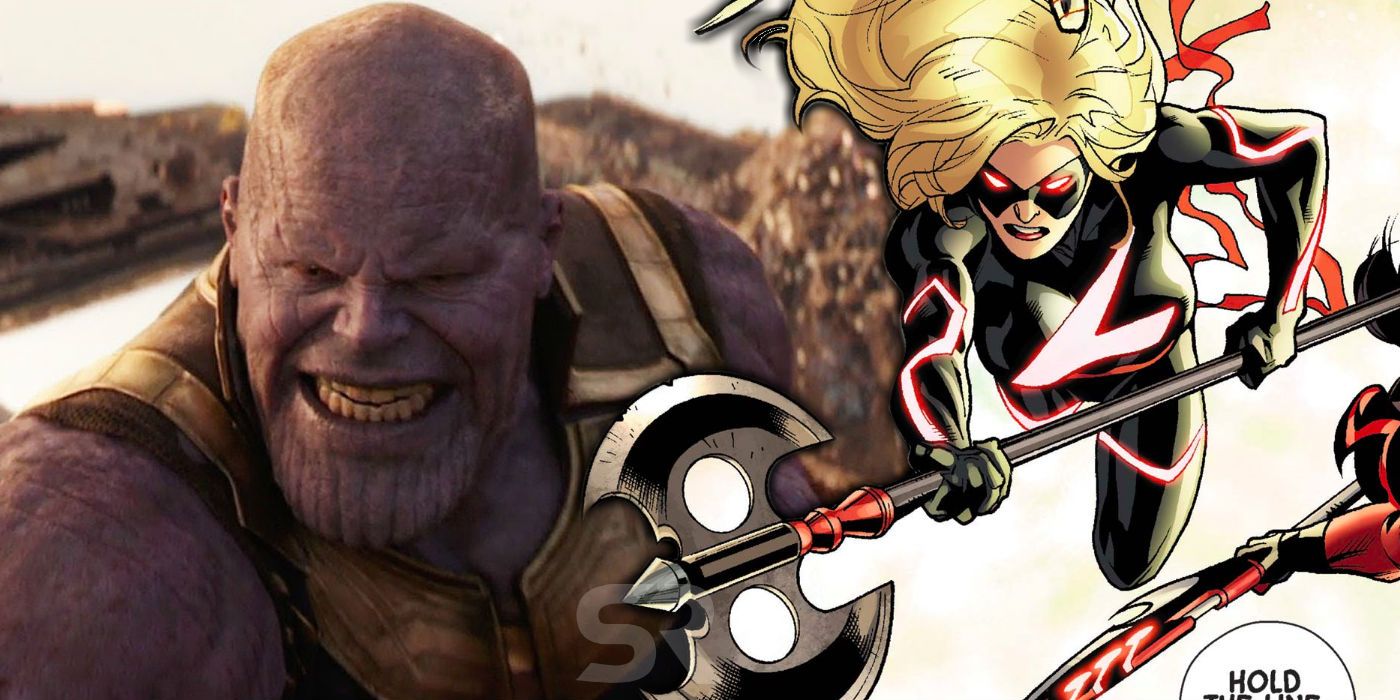 Since Eitri is expected to return in Avengers 4, we have to wonder why. Considering the powerful weapons he's already created in the past, it may be that Eitri is visited again to give the remaining heroes weapons of their own. There was recently a leaked piece of concept art for Avengers 4 that unveiled a brand new axe that will reportedly be in the movie. Early speculation has turned to Brie Larson's Captain Marvel being the owner of this axe. However, there's no signs that she'll have this in Captain Marvel, so it may instead be given to her in Avengers: Infinity War. It will need to be created first and Eitri is the best bet to do so, and there's some precedence in the comics for this to happen.

During Marvel Comics' 2011 crossover event Fear Itself, Carol Danvers (then going as Ms. Marvel) received a special axe not too different than the one in the leaked image. She is so far from the only hero to receive a special weapon to help defeat Red Skull's daughter, Sin, and Odin's brother, Cul Borson. As part of this storyline, Iron Man journeys to Asgard to plead with Odin to let him create powerful weapons for Earth's Mightiest Heroes. Odin grants this request and Stark creates this axe for Captain Marvel, but also special web shooters for Spider-Man, arrows for Hawkeye, an Uru sourced suit for himself, and much more. Something similar to this may be happening in Avengers 4.

Related: Avengers 4: Black Panther Shuri Could Be Key to HOW Dead Heroes Return

When Star-Lord asks Thor in Infinity War why everyone shouldn't receive weapons capable of killing Thanos, Thor responds by saying, "You simply lack the strength to wield them. Your bodies would crumble as your minds collapsed into madness." Marvel's been hyping up Captain Marvel's power with her being described as having an unprecedented power level. With the possibility that she can move planets, she could surely wield a weapon capable of killing Thanos like Thor does. The question then turns to the rest of the heroes. Will Eitri just create the axe for Captain Marvel? Or, will we get to see Iron Man get an Asgardian inspired suit, Captain America get a more powerful shield, Hawkeye get special arrows, Black Widow get new batons or swords, Rocket receives specialty bullets or a gun, and maybe even have Hulk receive a weapon or two of his own? All of this could be in play if Eitri is called upon to help the heroes.

On the other hand, we can't discount the possibility that Eitri will also be responsible for creating new weapons for Thanos. More concept art for Avengers 4 revealed a great look at Thanos' new sword, and it's more than likely Eitri plays a hand in that. There's no clear reason why Eitri would still listen to Thanos after he proved he couldn't trust his word before, but the sword is just as possible to be a Eitri creation as anything else. As if these options weren't enough, there's something else both sides could look to Eitri for help creating. 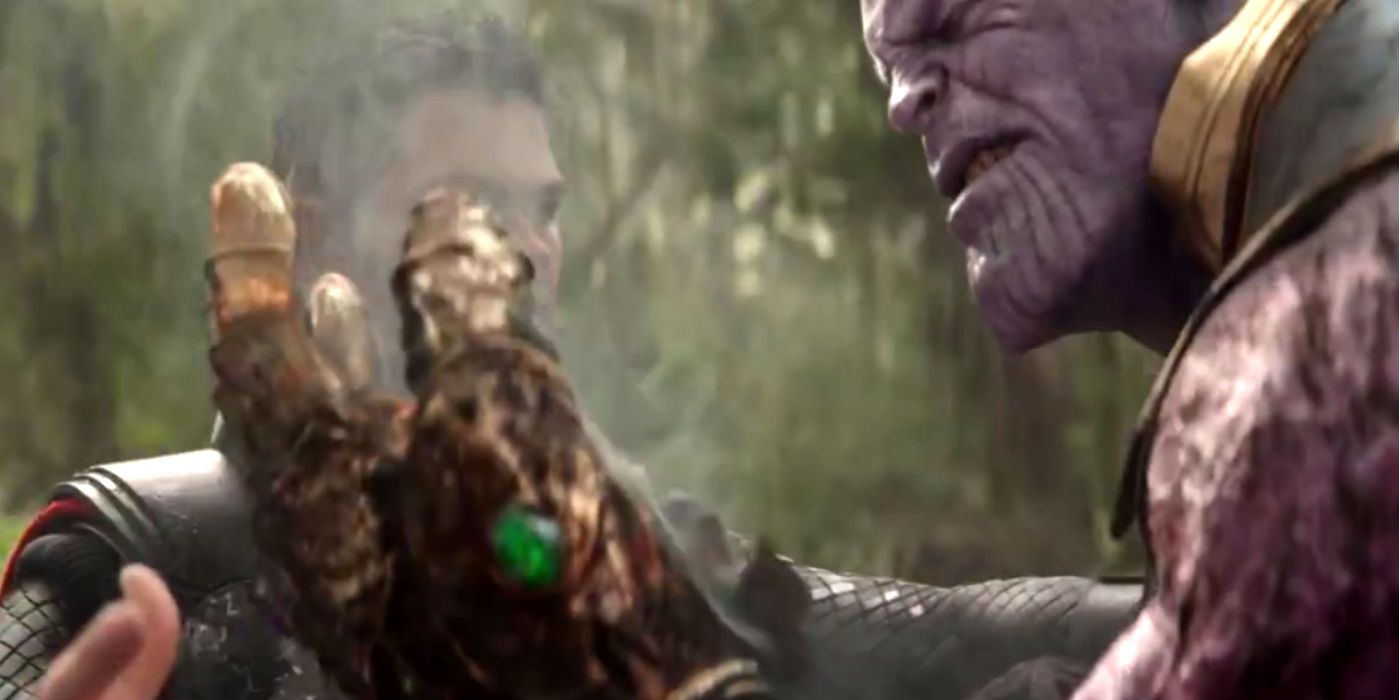 Eitri still has the mold for the Infinity Gauntlet and there's at least an explanation on each side of this war that would explain why they'd go to Eitri and ask him to make another Gauntlet. It would, of course, be up to Eitri to oblige either request, but he could be asked to make another and who it could be created for would have major repercussions.

Related: Avengers 4: Every Update You Need To Know

Staring with Thanos, we already know why he would visit Eitri. The Russo brothers previously confirmed that the snap permanently damaged Thanos and the Infinity Gauntlet. This could make it difficult, if not impossible, for Thanos to use the Infinity Stones individually or collectively in Avengers 4 with the current state of his Gauntlet. He could visit Eitri again to get a brand new Gauntlet. Promising to restore Eitri's hands could be enough to convince him, but he's also been betrayed by Thanos before, so it may just be the result of Thanos forcing him to do so.

The other option is that the Avengers visit Eitri and, whether he gives them new individual weapons or not, they ask him to build them their own Infinity Gauntlet. There's plenty of theories that Avengers 4 will involve time travel and that the Avengers will be hopping around the timeline grabbing the Infinity Stones. If that is their plan to undo the snap, they'll need a Gauntlet of their own that is powerful enough to hold the Stones, and Eitri is the only one who can make it.

However Eitri gets involved, he will be appearing in Avengers 4. With several potential items capable of coming from his forge, which ones he makes and who they are for could decide who is victorious in Avengers 4.

Cynthia Harrell, The Woman Who Sang 'Snake Eater,' Is Ready To Be Heard Again

A couple of weeks ago I wrote a blog about “Snake Eater,” the titular song in the 2004 video game masterpiece, Metal ...
Read More

Inugami Korone is a lot of things. She’s a cute anime girl. She’s a dog. She’s one of the most popular VTubers—a subs...
Read More
Back to News