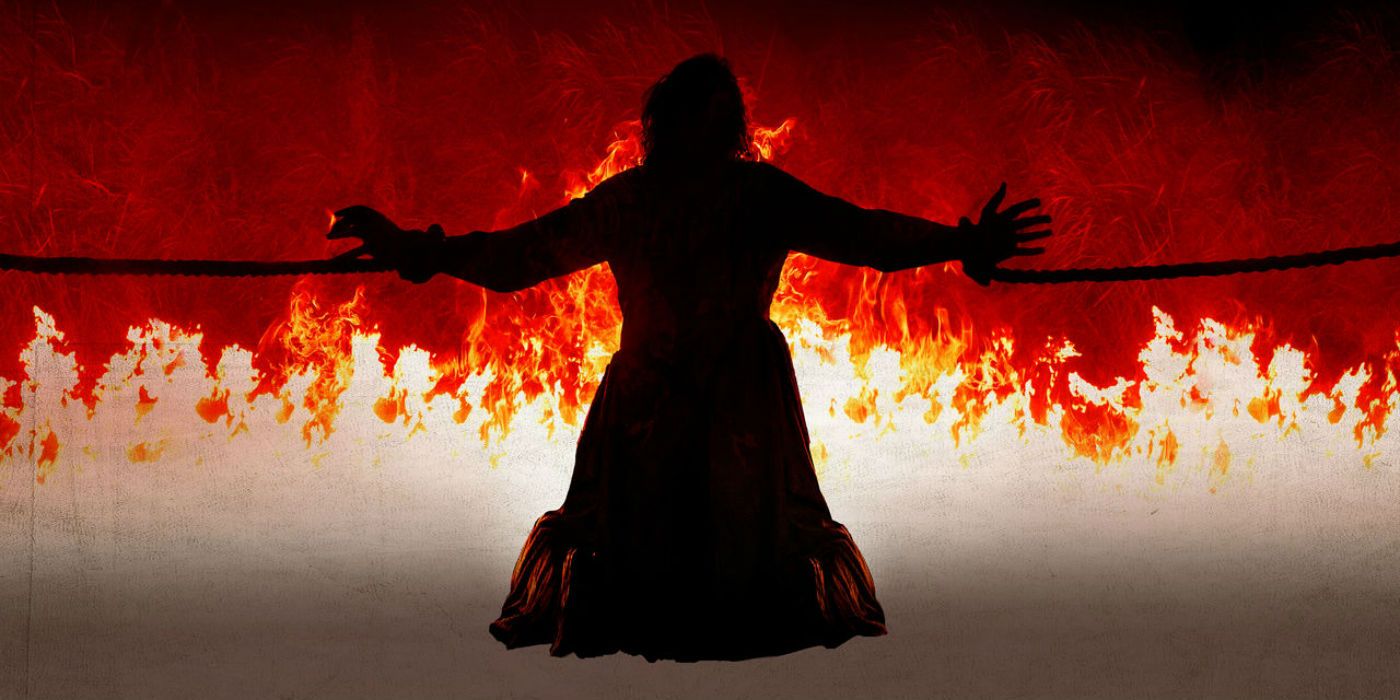 Warning: SPOILERS ahead for Apostle

Apostle's ending is not for the faint of heart - and it's even darker after we've explained it. In Gareth Evans' new Netflix horror film, Dan Stevens plays Thomas Richardson, a tormented man who goes to rescue his sister from a religious cult located on a remote island. Led by a self-proclaimed prophet called Malcolm (Michael Sheen), the cult worships a mysterious deity who lives on the island, but failing harvests and stillborn livestock have pushed their resources to breaking point.

In Apostle, Thomas begins covertly searching the island and learning about its dark secrets. Meanwhile, devoted young couple Jeremy (Bill Milner) and Ffion (Kristine Froseth) try to find a way to be together underneath the strict tenets of the cult - an effort that ends in tragedy and sparks discord between the settlement's founders.

Related: Watch The Trailer For Apostle

As Thomas searches for a way to free his sister, chaos escalates and we careen towards Apostle's ending. Let's breakdown the movie's weird mythology, the god at the heart of Erisden, and how the movie ends.

The God Of Erisden In Apostle Explained 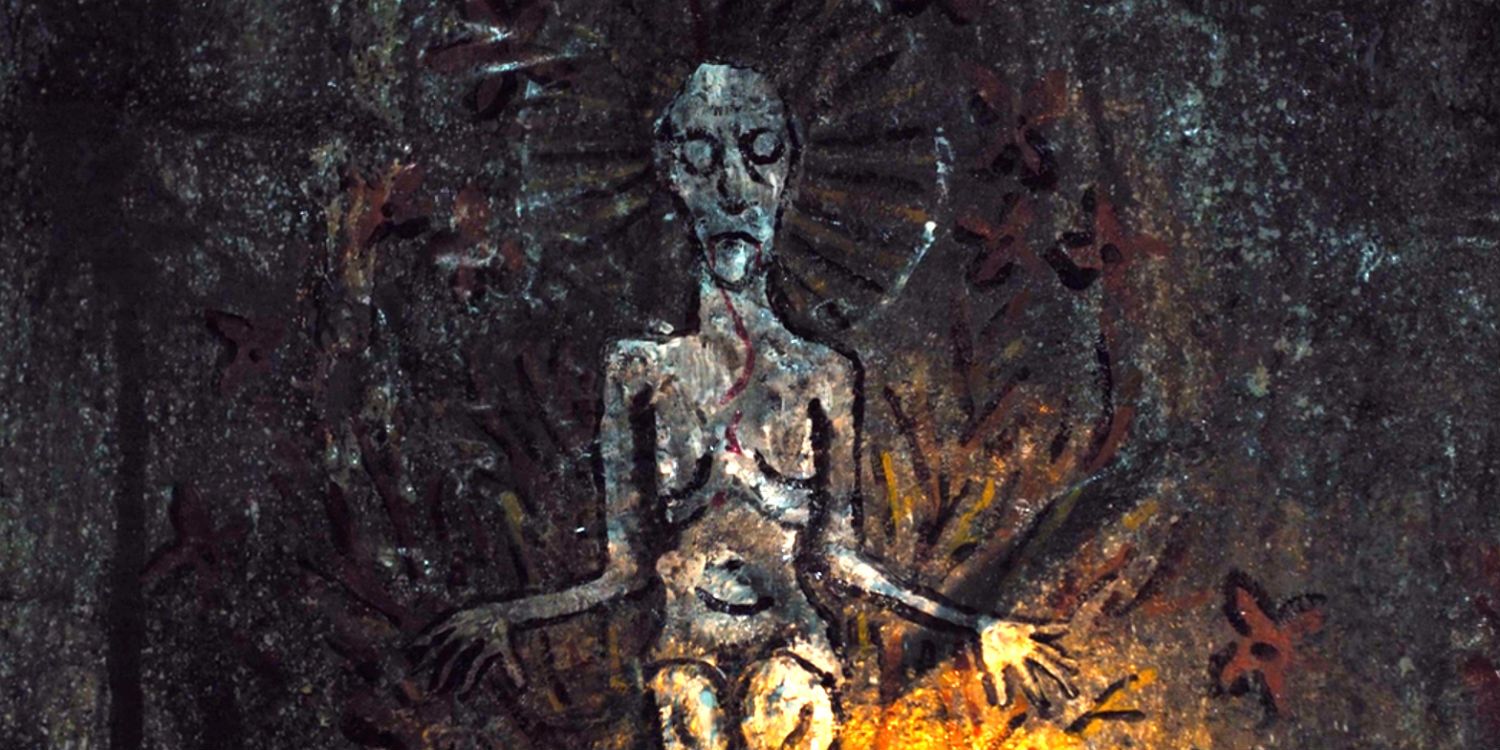 Referred to only as "Her" in Apostle's end credits, the god appears as a pale-skinned woman with a hunger for flesh and blood. When the founders of the cult - Malcolm, Frank (Paul Higgins), and Quinn (Mark Lewis Jones) - arrived on the island after fleeing persecution for their beliefs, Quinn discovered cave paintings on the island that revealed the nature of the god and how she "works." The paintings are marked with the word "Exodus" - a reference to the book of the Bible in which Moses leads his people out of slavery to the promised land. It's unclear who made these paintings, but the implication is that the people of Erisden are not the first to come to the island and worship this god.

Throughout Apostle, paintings show the god being worshipped atop a fire and given sacrificial offerings in exchange for bountiful harvests, but the three men perverted this ritual by keeping the god a prisoner and force-feeding her with a funnel, essentially treating her like a "machine." As a result, the island's harvests have become poisoned and their animals cannot have live births, pushing the community to the brink of starvation. Believing that the problem is the nature of the sacrifices (rather than how they are offered), Malcolm has begun offering her human blood instead of animal blood, but Quinn believes that they need to start sacrificing people in order to satiate her.

The god appears to have two forms: one which is held prisoner in a barn and force-fed blood and entrails, and another that wanders the island in search of food, but has been rendered weak by captivity. Early in the film we see that the cult has a ritual practice of bloodletting, with each of the devotees filling a jar with their blood and placing it outside their bedroom doors at night as an offering to the god. When Thomas accidentally cuts his finger and spills a few drops of blood, the god appears beneath the floorboards, desperately trying to lap up a few drops of blood. The god in the barn is administered to by a creature called the Grinder, whose face is covered by a wicker helmet.

Thomas first encounters the god in her second form as she pursues him through a sewer filled with gore that leads out into the cave with the paintings, and is understandably terrified by her. However, by the end of the film the two of them have entered into a strange alliance.

Page 2: Apostle's Ending And What It Means 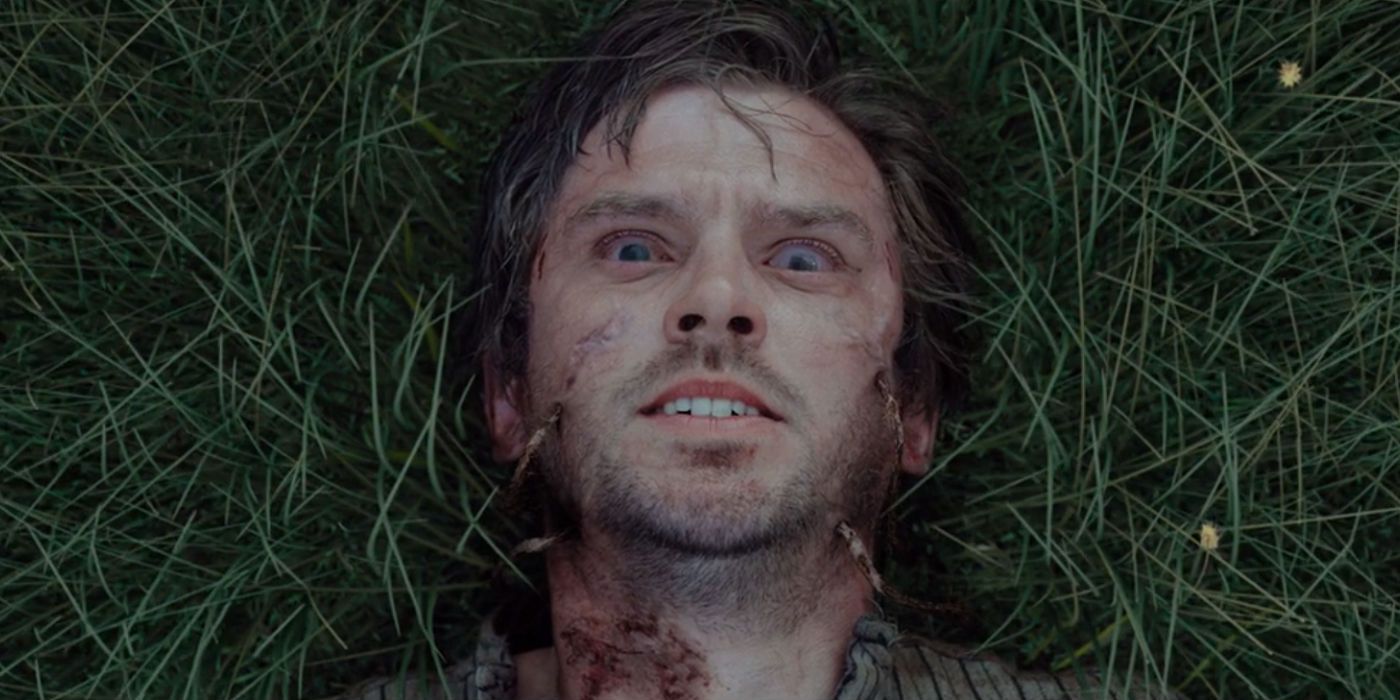 And so we get to Apostle's ending. After a failed attempt to free his sister, Thomas wakes up in the barn to discover that the Grinder has hooked him up (literally) to a terrible machine designed for grinding meat for the god. As the Grinder turns a crank, Thomas is drawn into the machine, and eventually the fingers of one of his hands are crushed in it. However, this offers him an opportunity for escape, and he is able to free himself and kill the Grinder.

Thomas approaches the god, who smiles at him and says in a strange language, "How I've waited for you, my son." He falls to his knees in front of her and she takes hold of his head, with small thorns protruding from her fingertips and penetrating his temples. When Thomas opens his eyes again they are pale, like hers, indicating that he has become her thrall. She then instructs him to free her, so he takes a lantern and throws it into the dry wood of the bed where she's imprisoned, engulfing her in flames - just like the painting in the cave. The fire spreads rapidly through the plants that connect her prison to the rest of the island, and the entire settlement begins to go up in flames. The god's other form slaughters Malcolm's guards in the woods, impaling them on trees.

Related: Here Are The Best TV Shows And Movies Coming To Netflix In October 2018

Meanwhile, Quinn has captured Thomas' sister Jennifer (Elen Rhys) and Malcom's daughter Andrea (Lucy Boynton), and has revealed his disgusting plan: to keep them as his personal sex slaves, and feed the children they bear to the god in exchange for the island's restoration. Thomas arrives on the scene and a fight with Quinn ensues, in which Thomas is mortally wounded. Jennifer and Andrea manage to get a chain around Quinn's neck, and they use it to drag him across the ground as Thomas keeps hold of the knife in Quinn's chest - disemboweling him. 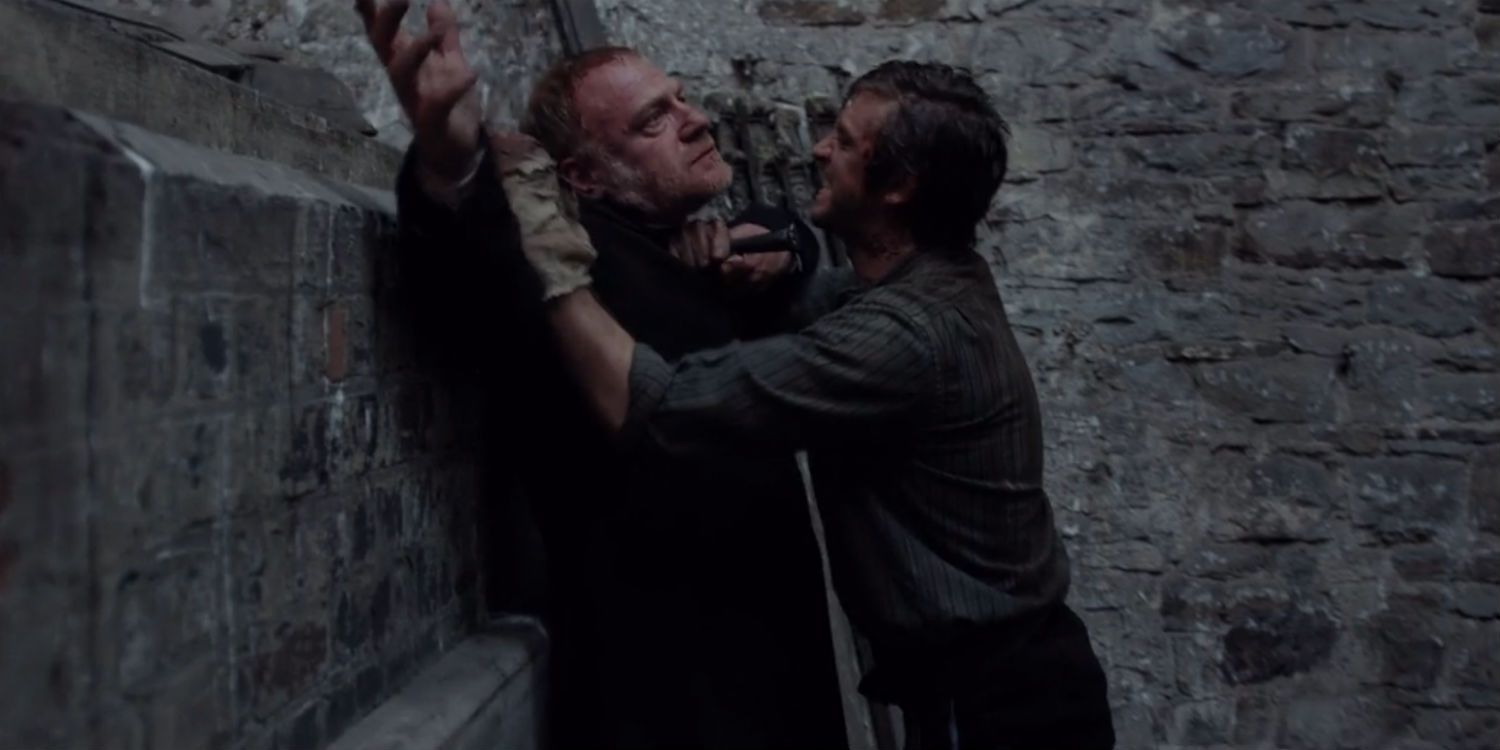 The rest of the cult's followers have fled to the boats on the shoreline, so Thomas, Jennifer and Andrea flee the burning settlement to join them. However, Thomas grows weaker and weaker from blood loss, and eventually collapses next to a tree on the hilltop. He tells the women to go on without him, and after a tearful goodbye, they do so. As they catch up to the final rowboat, a scream comes from island and a portion of the cliff explodes in a torrent of fire and blood. Andrea breaks down in tears as they depart.

On the cliff, Thomas is bleeding out when Malcolm - wounded in the shoulder after being shot by Quinn - approaches. Together, they watch the ship carrying the cult's followers begin to sail away from the island. Thomas looks down and sees that where the blood dripping from the stump of his fingers is soaking into the soil, a plant is rapidly growing. He looks up at Malcolm, who smiles at him in quiet acceptance.

Then things get a little stranger (even for a film where a group of cultists make ritual sacrifices to an imprisoned god). Thomas falls back onto the grass, and vines grow up out of the ground around him. They pierce his neck and face and begin crawling underneath his skin, and his eyes turn glassy and strange. We once again hear the god say, in her language, "How I've waited for you, my son," and then the credits roll. It's not made explicit, but the implication is that Thomas has now become a vessel for the god, and will live on in a similar form.

Apostle is available now on Netflix.

The Art Of Fall Guys

SNK Allstar is a mobile King of Fighters game. And like any good mobile game, it dropped a doozy of an advertisement ...
Read More

For perhaps as long as Twitch has existed, there has been a myth: On exceedingly rare occasions, if the stars align p...
Read More
Back to News