Bleeding Cool readers will be familiar with Jude Terror‘s Written By A Bot series of articles in which, like CBR, he gets a bot programme to write a pop culture article by feeding in information and seeing what comes out the other end. The results can be quite amusing. At least the Bleeding Cool article are intended for entertainment only and are open and upfront about what they are. Not every site is so circumspect, especially when it comes to announcing deaths. 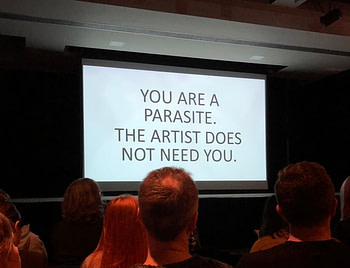 That’s where comic book writer and bon vivant, Dr Kieron Gillen found himself last week. He has posted a slide from his Guardian Masterclass on comic book writing, pointing out the very real dichotomy between writer and artist in comics, and realising what writers must bring to the table to justify themselves.

In his newsletter he writes,

I concentrated on basically three areas – script as blueprint, script as love letter and pacing (including all manner of weird acts of magic in comics). The photo above is one of my opening gambits, which is trying to encourage writers to realise that a writer isn’t needed to make a comic. An artist could just write a comic themselves, and if you don’t actively bring more than that, it’s a problem. The aim is to become a symbiote, as essential as mitochondria are to eukaryote cells. I also spent a lot of time in the love letter section about how to avoid becoming an active parastoid – as in, a parasite which kills the host.

But writer Warren Ellis had a most amusing reply regarding the slide.

he was not supposed to say that out loud

my condolences to Kieron Gillen’s family and friends in re: his imminent “accident” https://t.co/SQzRT3JVyN

And that’s when things went really weird. The website Celebrities Deaths took that tweet and turned it into an article. And Kieron noticed…

A presumably bot-driven site has just announced my death. I suspect it’s due to everyone tweeting about the release of DIE this week. The future, eh? pic.twitter.com/QqAx0TXBC9

He is very much alive, I would like to reiterate. But yes, this is clearly where things are going, aren’t they?

The post When Warren Ellis Made a Bot Think Kieron Gillen Had Died (He Hasn’t) appeared first on Bleeding Cool News And Rumors.