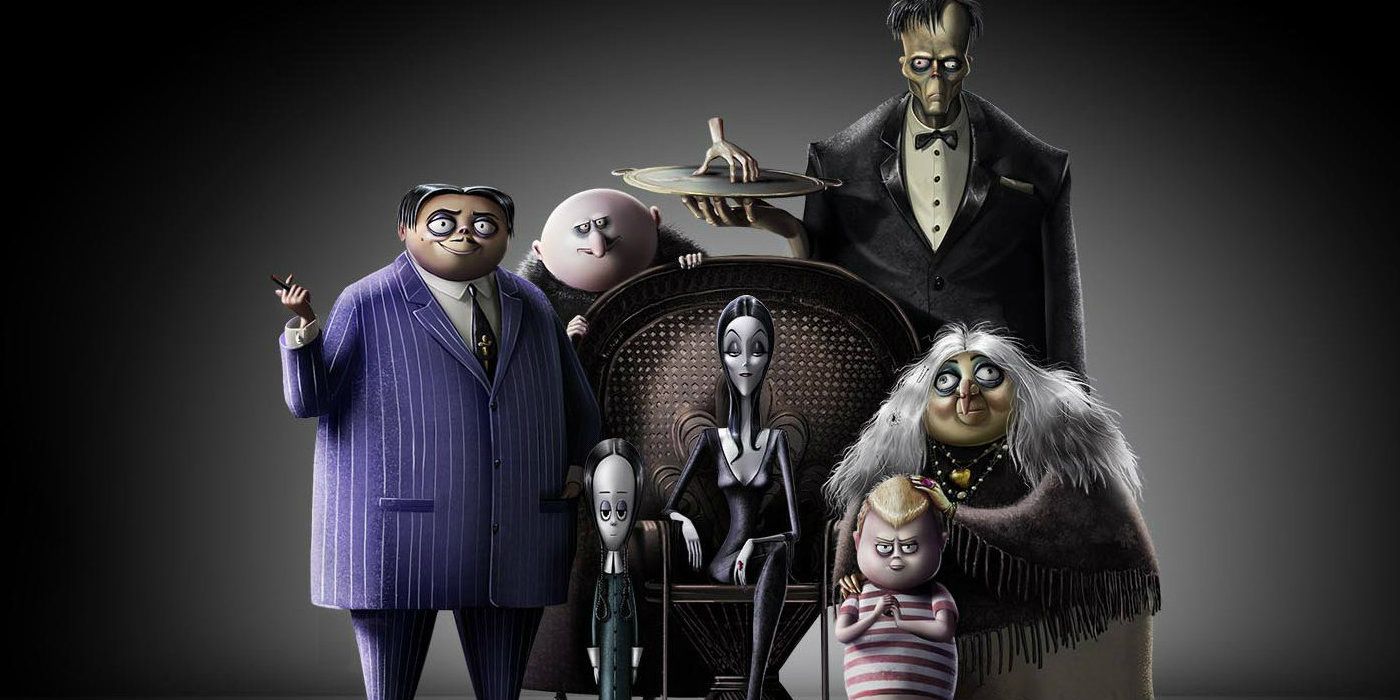 The Addams get animated in the trailer for The Addams Family. Over the decades since Charles Addams introduced his single-panel Addams Family New Yorker comics in the 1930s, the cartoonist's satirical vision of a creepy and kooky aristocratic American family has given rise to a famous 1960s live-action TV show, multiple cartoon series, and a handful of live-action movies in the '90s. The Addams are now getting a computer-generated makeover on the big screen, courtesy of Shrek 2 and Sausage Party director Conrad Vernon.

Oscar Isaac and Charlize Theron lend their voices to the film as Addams Family patriarch Gomez and matriarch Morticia, respectively, with Chloë Grace Moretz, Nick Kroll, Bette Midler, and Stranger Things' Finn Wolfhard bringing the rest of the (altogether ooky) Addams clan to animated life here. After years of being stuck in development as a stop-motion feature with Tim Burton at the helm, the Vernon-directed Addams Family started production in October 2017, and has been moving steadily down the pipeline ever since. Now, ahead of the film's release this October, MGM is getting its marketing campaign fully up and running.

The first Addams Family trailer is now online, ahead of its premiere in theaters with (presumably) the Laika-animated Missing Link this week. You can check it out in the space below.

Naturally, the Addams Family teaser is focused less on story and more on re-acquainting the general public with the titular family and their comically spooky ways (be it Morticia riding an army of spiders or Gomez putting a clamp on his head for, presumably, the sheer fun of it). Plot-wise, the film pits the Addamses against Allison Janney's Margaux Needler, a reality TV host who's obsessed with "absolute suburban, pastel perfection", and has little to no patience for the Addams Family and their fondness for ghoulish tomfoolery. Eighth Grade star Elsie Fisher also lends her voice to the movie as Margaux's daughter, Parker, but she's yet to appear in any of the official marketing material released so far.

It'll be interesting to see if Vernon and his collaborators succeed in putting a fresh spin on The Addams Family with this animated adaptation. The property at large is (arguably) somewhat dated by this point, and there's a fair amount of nostalgia for the first two Addams Family live-action movies among children of the '90s, so this new version is facing an uphill battle in that regard. On the other hand, the voice cast is pretty terrific and Vernon has been successful in satirizing a variety of targets with his previous CGI animated offerings, so that bodes well for his efforts here. That said, it's still disappointing that moviegoers aren't getting a new live-action The Addams Family movie with the actors that Vernon's assembled.