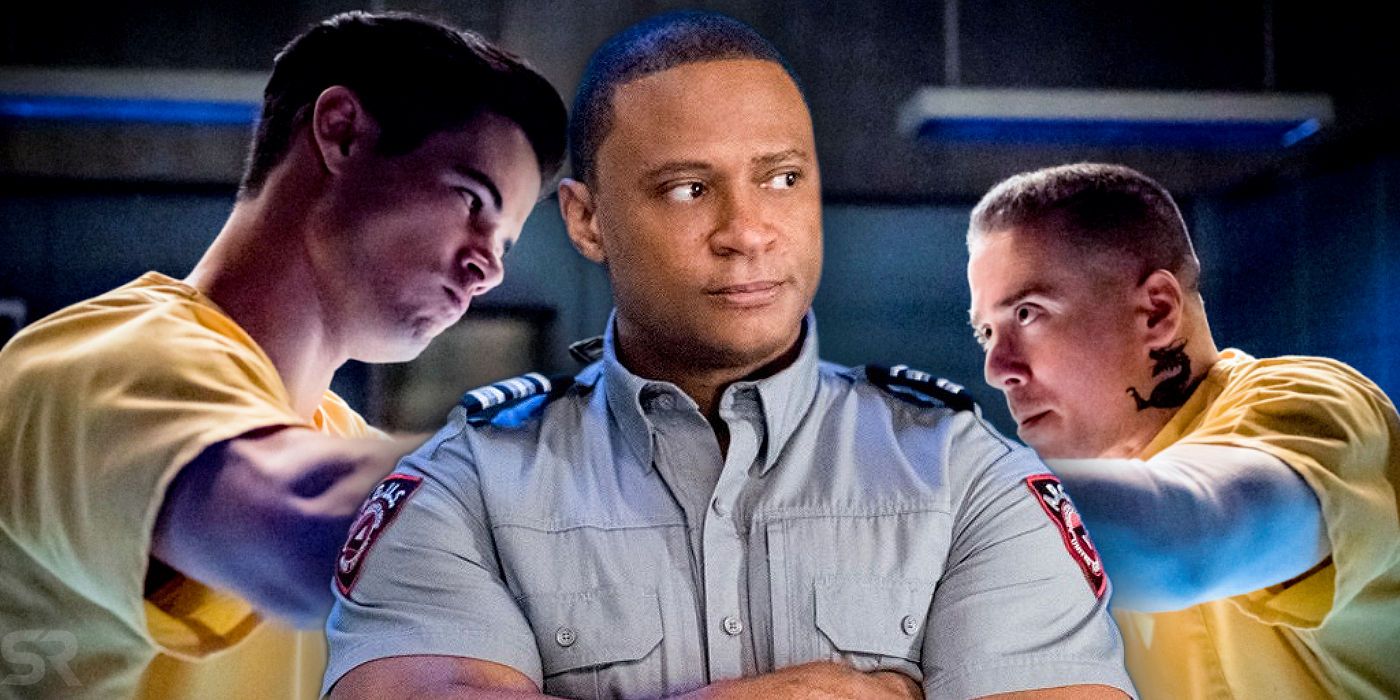 Arrow season 7, episode 14 was titled "Brothers and Sisters," in reference to the strong family theme that tied many of its subplots together. Despite this, the lion's share of the episode was devoted to John Diggle and Lyla Michaels' continued efforts to track down the mysterious terrorist financier known as Dante. Yet even this storyline was a family affair of sorts, as Diggle finally came clean to Oliver Queen and Felicity Smoak (his brother and sister in spirit) regarding the deal he had made with Ricardo Diaz - the crime-boss who had nearly killed them both and destroyed their family in his efforts to take over Star City.

While Felicity was quick to begin plotting her own assassination attempt on Diaz (with the assistance of Black Siren), Oliver chose to trust that Diggle would be able to handle Diaz and focused his efforts on extending an olive branch to his estranged sister, Emiko Queen. Learning that Emiko was seeking her mother's murderer, Oliver offered his assistance and what police resources he could to assist her in her quest. Emiko begrudgingly accepted but the tempers of the two vigilantes still clashed as the hunt began.

Related: The Arrowverse in Chronological Order (So Far)

In the future of Star City 2038, the story was dominated by another brother and sister pairing. William Clayton, having learned that the mysterious woman called Blackstar was the daughter of Felicity Smoak and Oliver Queen, attempted to reach out to the embittered young woman so they could pool their efforts to find her missing mother. Given Blackstar's attitude toward Star City's vigilantes (whom she blamed for the miserable state of the only home she'd ever known) she was understandably reluctant to join forces with anyone who'd ally himself with Arsenal and the Black Canaries, even if he was her own brother. Here are some of the questions Arrow fans are asking after the end of "Brothers and Sisters."

7. Why Does Felicity Hide Her Pregnancy In The Future? 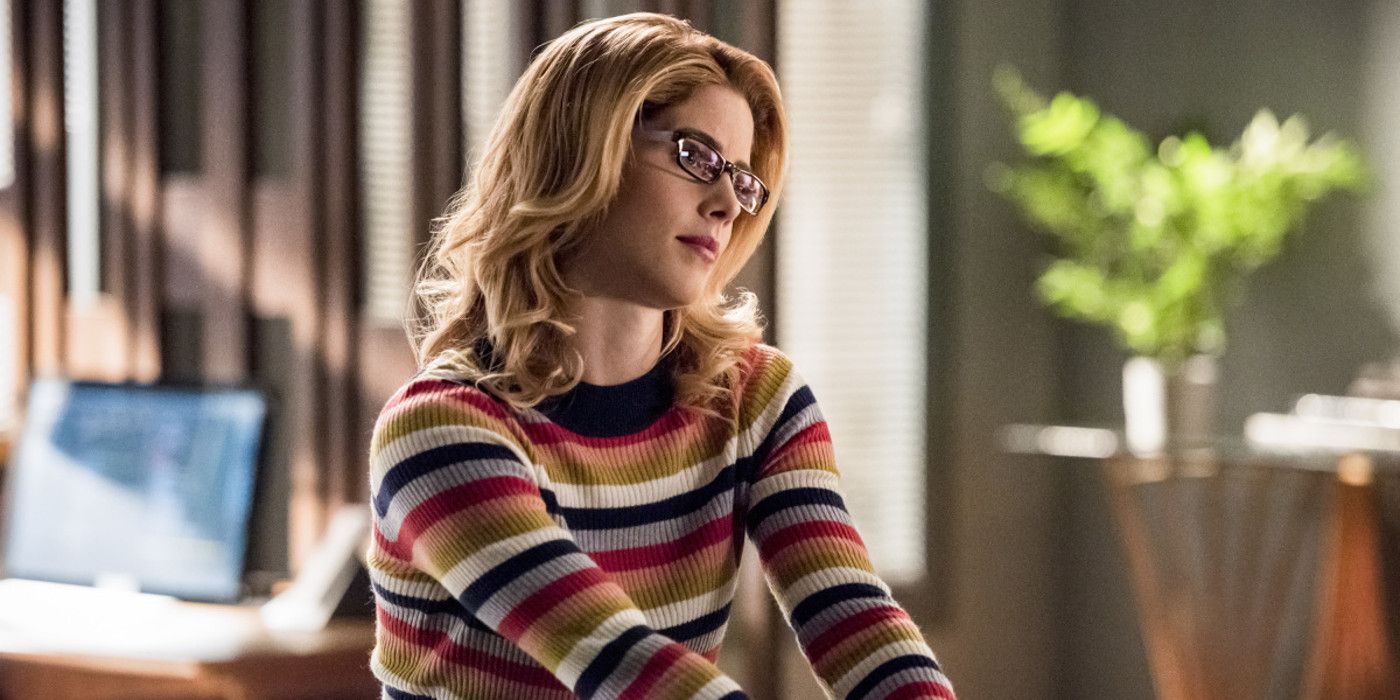 As "Brothers and Sisters" opens, Felicity still hasn't had the chance to tell her husband the good news about her pregnancy. Black Siren guesses at the fact that Felicity is pregnant based on the fact that she's abstaining from the wine and caffeine that are usually a staple of their meetings. By the end of the episode, Felicity finally gets some time alone with Oliver to tell him that they are going to have a child. For some reason, the fact that Oliver and Felicity had a daughter together is a complete surprise to the heroes trying to save Star City in the future of 2038.

When Blackstar reveals herself as Mia Smoak, William Clayton says that he had no idea that Oliver and Felicity had any children after he left them to live with his grandparents. Roy Harper, Zoe Ramirez and and Dinah Drake are equally dumbfounded. The one person who was aware of Mia's parentage is Connor Hawke, who reveals that the secret was entrusted to him by his father, John Diggle. This means that, at some point in the near future, Felicity will have a reason to keep her pregnancy hidden from all but those who are closest to her. The reason, though, is anyone's guess at this point. 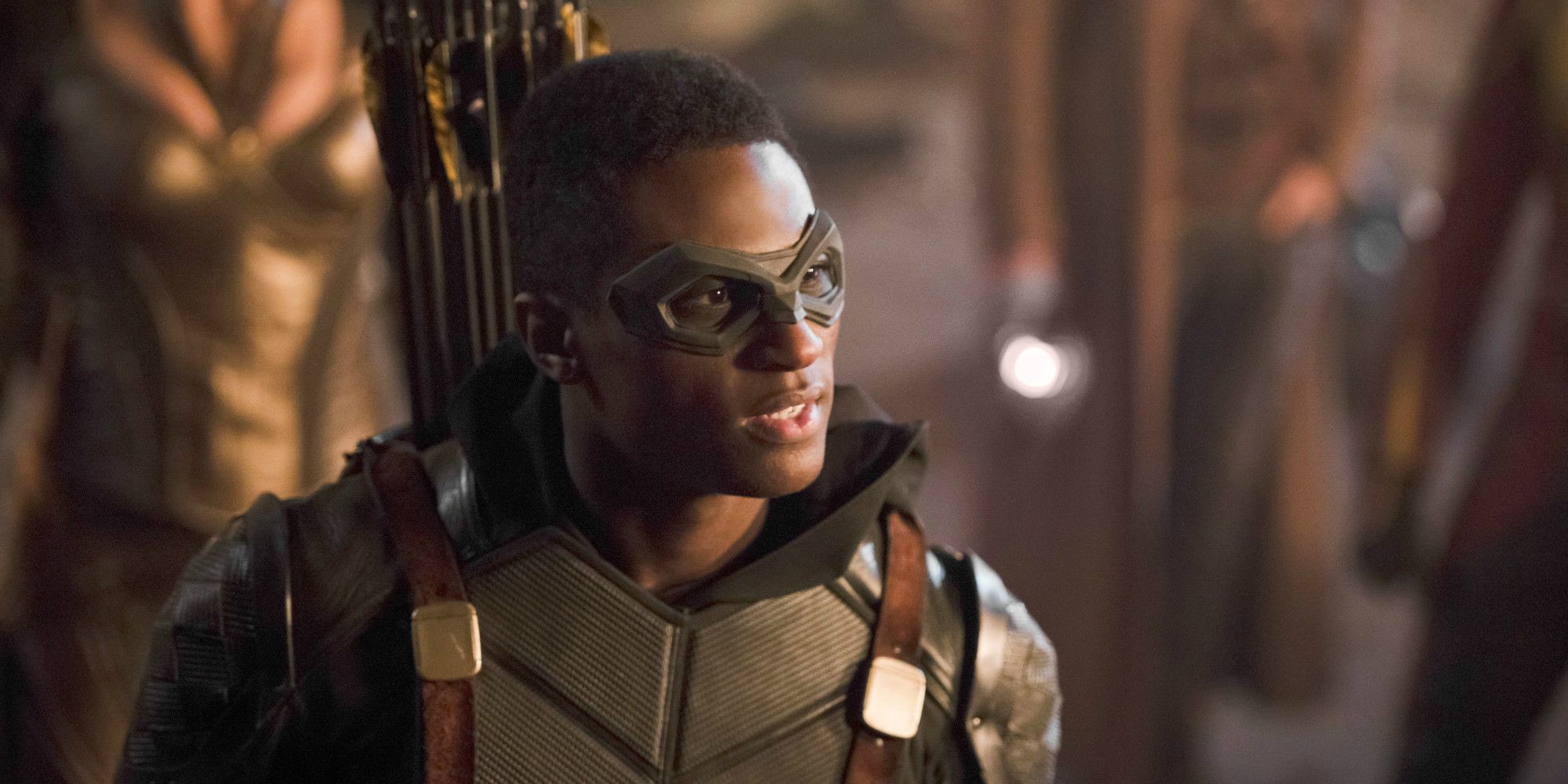 The flash-forward storyline in Star City 2038 reveals another shocking aspect of a new hero's lineage. When Connor Hawke reveals that he knew the secret of Blackstar's parents, he explains that he knew it because he was told by his adoptive father, who asked him to protect Oliver Queen's secret daughter. His adoptive father being John Diggle, who was apparently one of the few privy to Mia Smoak's existence.

This proves a significant change from the version of Connor Hawke presented in the Legends of Tomorrow episode "Star City 2046", who was also portrayed by actor Joseph David-Jones. This version of Connor Hawke was said to be John Diggle's biological son, John Diggle Jr.,who had adopted the "Connor Hawke" alias as a mark of shame after failing to save his father's life. Though he took up the Green Arrow mantle that his father once wore, he refused to answer to his birth-name, believing he was unworthy of sharing the name of such a great man.

5. What Happens To Oliver In The Future? 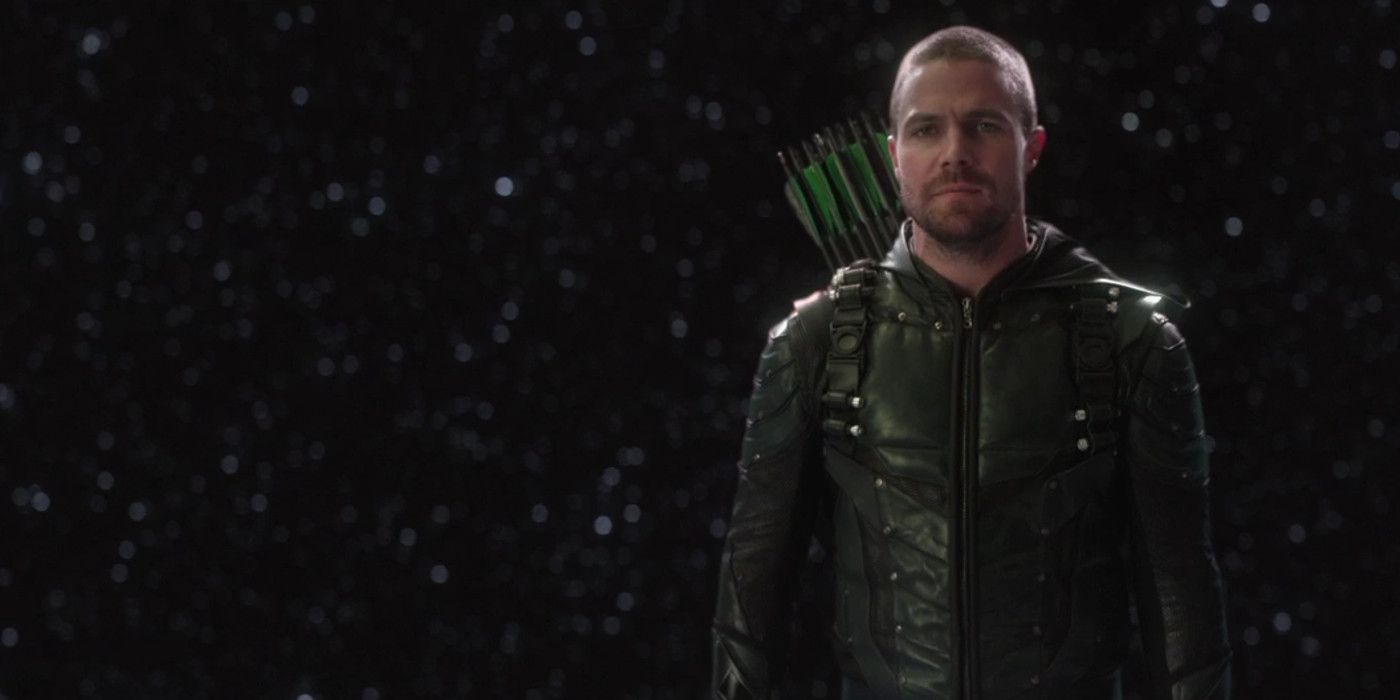 Later in "Brothers and Sisters", William approaches Mia claiming he wants to commiserate over how horrible their parents were. William reveals to Mia that he never heard from either Oliver or Felicity again after his grandparents were given custody of him and that he had just assumed it was for his protection up until he found out they had a child after him. In turn, Mia reveals that she never knew her father and asks William for details regarding Oliver Queen and what sort of man he was.

Given the rate at which time flows in the Arrowverse relative to the passing of television seasons in the real world, this would suggest that Mia will be born around the time of the upcoming Crisis on Infinite Earths. This would also also seem to confirm the theory that Oliver Queen could die as part of the eagerly-anticipated crossover event. Of course the timeline of the Arrowverse is nothing if not malleable, but this seems to be another sign that Green Arrow's days are numbered.

Related: The Flash Is Already Teasing The Crisis On Infinite Earths Crossover

4. What's In Store For Diggle After He Leaves ARGUS? 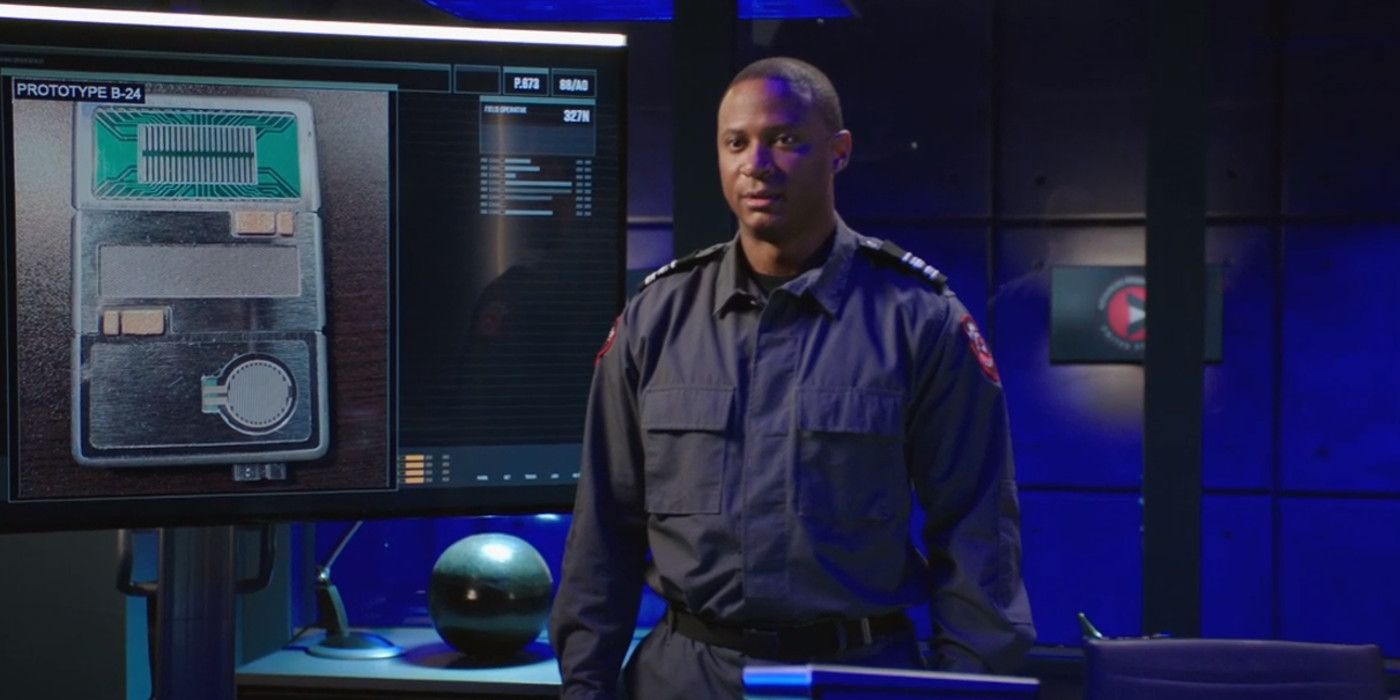 When the mission to capture Dante goes south, John Diggle makes a heroic sacrifice when a government cover-up threatens to remove his wife, Lyla Michaels, from her position as Director of ARGUS. Diggle says that he will take the blame for the Ghost Initiative program being reactivated and claim that he acted without her official approval, though this will kill his own career as a government agent. It's unclear, however, if it might stop Diggle from seeking employment as a deputized vigilante along with the rest of his former Team Arrow allies, who are now working with the Star City Police Department. 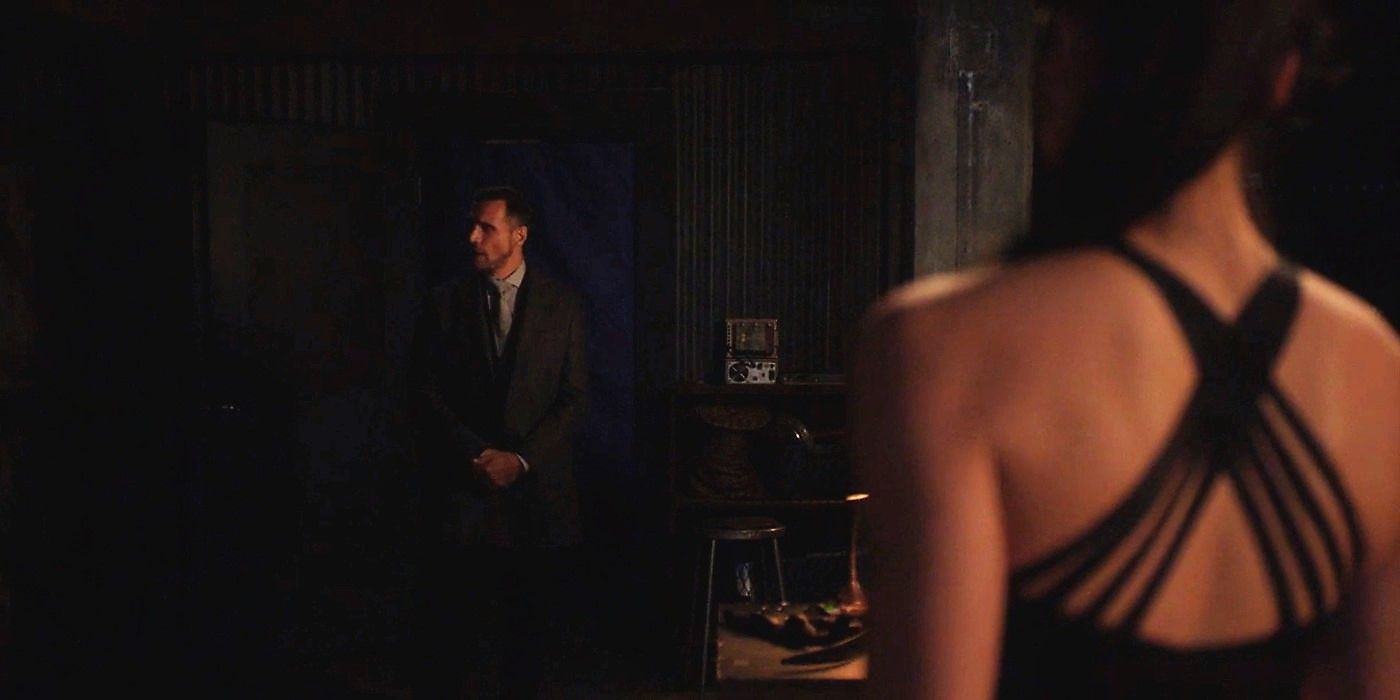 3. What Is Dante's Relationship With Emiko?

It's revealed near the end of "Brothers and Sisters" that Emiko Queen knows Dante, when he intrudes upon her training in her hideout. He refers to her as an old friend but her reaction to seeing him is far from friendly. Still, he says he is pleased to hear that Oliver Queen trusts her now and that the timing could not be better.

The obvious implication is that Emiko worked for Dante's organization at some point in the past. This would be a clever nod to the Green Arrow comics, where Emiko Queen was trained as an assassin by her mother and both were employed by the comic book version of Dante and his organization, The Ninth Circle. This would also explain one of the bigger mysteries of Arrow season 7 - where did Emiko acquire her amazing fighting skills?

2. Will The Ninth Circle Be Season 7's Big Bad? 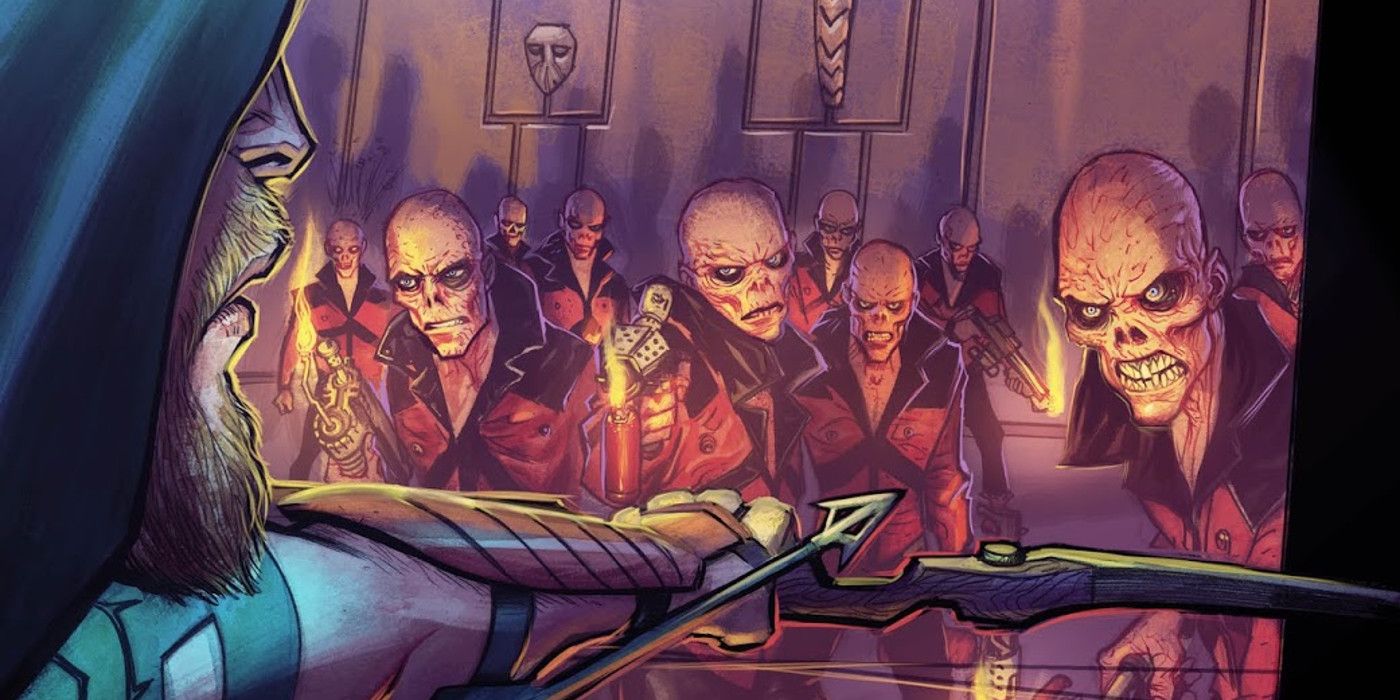 With "Brother and Sisters" having revealed both Virgil and Dante among the leaders of a vast organization of criminal financiers with connections in the Pentagon, it seems likely that they are being set-up to be the true villains of Arrow season 7.  It remains to be seen if their organization will ultimately be named as the Ninth Circle - the satanic cabal who were the chief villains of the Benjamin Percy's recent run on the Green Arrow comics. Though the name of their group has yet to be dropped, Virgil made a reference to the narrative poem The Divine Comedy when he threatened Ricardo Diaz by saying that "treachery earns the worst punishment." Such was the case in the Hell of The Divine Comedy, where the worst part of Hell - the Ninth Circle - was reserved for traitors and oath-breakers.

Related: Theory: Arrow Season 7's Real Villains Are In The Present And Future

1. Who Burned Ricardo "The Dragon" Diaz? 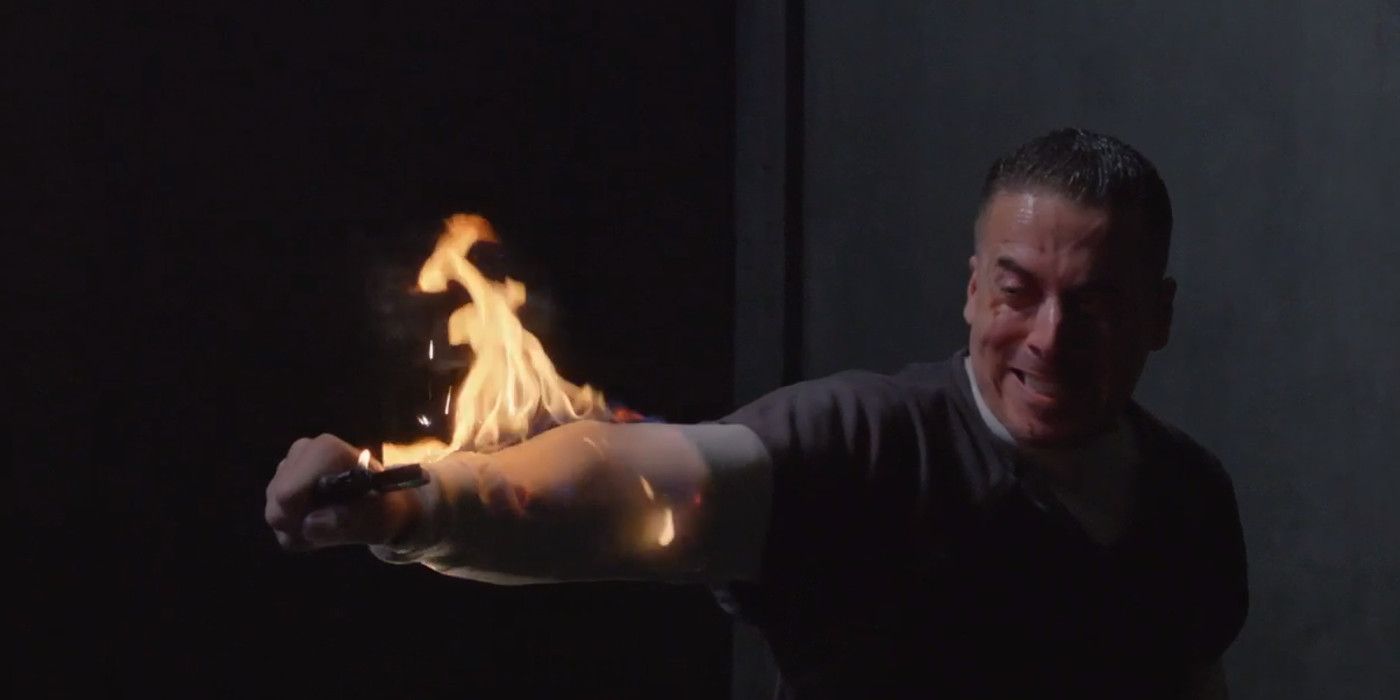 The final scene of "Brothers and Sisters" takes place in Ricardo Diaz's cell at Slabside Penitentiary. Diaz's shadowboxing is interrupted by an unseen visitor, whom Diaz recognizes but does not seem afraid of. Suddenly, the sprinkler system in the cell goes off, soaking Diaz and leaving him sputtering. The liquid is revealed to be something other than water, however, as the unseen figure tosses a lit lighter into the cell, setting off an inferno that leaves "The Dragon" engulfed in flame and screaming for a brief few seconds.

Ignoring the question of whether or not Ricardo Diaz has finally died, the mystery of who set up this fiery deathtrap remains. The obvious answer is that this is the work of Dante and his organization. While Diaz did blow the whistle on the ARGUS operation to catch Dante at the Quraci embassy, he also helped to set up ARGUS' trap for Virgil - something it's highly unlikely the criminal financiers would have forgotten. Nor would they be likely to forgive the debt that Diaz owed them for fronting him the money to hire the Longbow Hunters, which he could hardly pay back while incarcerated in a maximum security prison.

Another likely suspect is Black Siren, who said earlier in "Brothers and Sisters" that she would love to see Ricardo Diaz dead, as she assisted Felicity in her plot to remotely trigger the bomb that ARGUS had implanted in his head. It would be entirely in her vicious character to follow through with her own plan when Felicity heeded her better angels and decided not to kill Diaz after all. She would also have easy access to  Slabside Penitentiary in her guise as District Attorney Laurel Lance and would be recognized by Diaz without being seen as an immediate threat.

One interesting possibility worth considering is that Black Siren is now working with Dante's organization. This would explain the issues with either one of them carrying out the plot on their own. While Black Siren could enter the prison easily enough, she'd have trouble setting up the flammable liquid in the pipes by herself. Likewise, while Dante would have the resources to sneak someone into Slabside Penitentiary and set-up the death trap, it's unlikely he'd have an agent known to Diaz who could throw him off balance as effectively as Black Siren. Whoever is responsible for burning (and possibly killing) Ricardo Diaz, they've managed to raise the stakes and make Arrow season 7 even more interesting.

More: Every Nightwing Reference In The Arrowverse